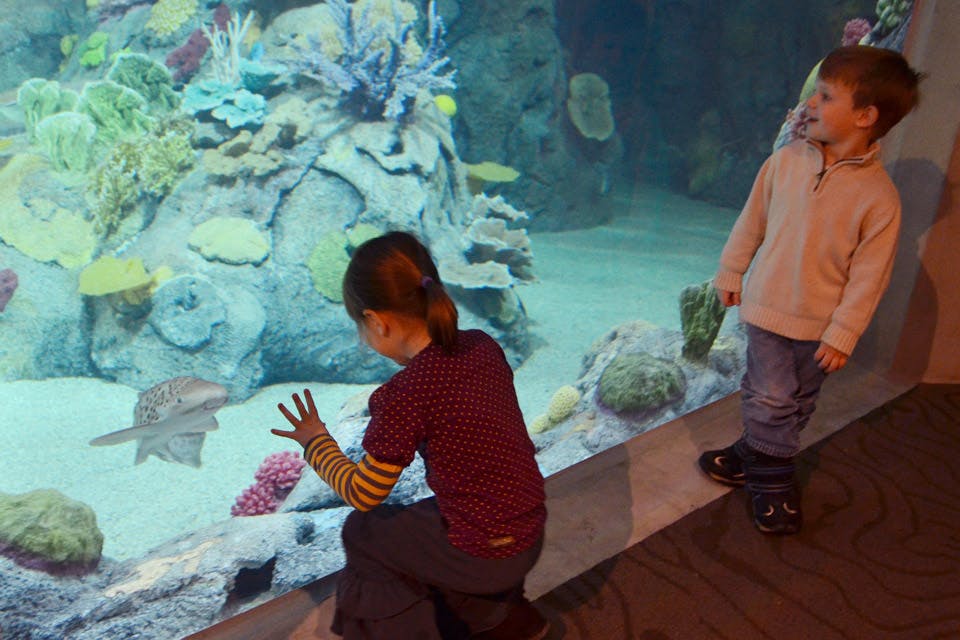 The Toledo Zoo’s aquarium offers its visitors an up-close look at the world beneath the waves.

Two blennies — small fish more formally known as Blennioidei — have just arrived in a clear plastic bag tied with a twisty. The container looks like the kind you get when buying a goldfish from a pet store, only bigger, and is tucked inside a protective plastic bucket. But this one also has a small square of Styrofoam floating on top of the water.

“Blennies like to get out of the water every so often, so it’s like a raft,” explains Jay Hemdal, curator of fishes and invertebrates at the Toledo Zoo’s recently renovated aquarium. “They are so much fun to watch.”

As if on cue, one of the elongated blennies suddenly attaches itself to the inside of the plastic bag and wiggles as if it were showing off its athletic skills.

Fish and other aquatic animals have been arriving at the aquarium by planes and trucks from all over the world since July. More are coming within the next several months while minor adjustments are made in suitable tank mates and availability of species. Most fish are quarantined for at least 30 days before being released into exhibits with others. Holding tanks at the zoo — and in one case, Hemdal’s home — serve as temporary residences.

The Toledo Zoo’s aquarium — built with stone and brick by the Works Progress Administration — opened in 1939 and shut its doors in October 2012 for the massive renovation. About 80 percent of the animals were sent permanently to other facilities because the cost and trauma of a move back to Toledo would have been too great. Some of the aquarium’s most popular animals were retained, including an alligator snapping turtle and others that would be difficult to acquire again. The aquarium reopened March 27 after a $25.5 million makeover.

The former facility was considered state of the art when it debuted. But saltwater is corrosive, filtration systems become outdated and visitors’ needs change. In 2006, Lucas County voters passed a capital levy to fund 80 percent of the project. The remainder was covered by grants and private donations.

“It was a long time coming,” says Jeff Sailer, the zoo’s executive director and CEO. “I am most proud that we kept the historic exterior of the building, which is what visitors told us they wanted, but completely improved the interior. We are one of the few zoos in the country to have both large mammals and a freestanding aquarium.”

For the most part, the small, window-like tanks in rows on the walls are gone. Several smaller displays have been added, which allow some of the smallest creatures, including graceful seahorses and orange, white and black clownfish, to be best seen.

New, massive tanks also give visitors the feeling of viewing fish from the vantage point of the ocean floor. The old aquarium featured 46,000 gallons of water, while the new one has 178,000. The largest tank previously held 7,600 gallons. The new floor-to-ceiling reef tank holds 93,130 gallons. Volunteer certified divers from the community communicate with visitors from inside the tank with a microphone. A bubble window allows viewers to lean forward and be surrounded on glass by three sides, providing an up-close and personal view of the underwater environment.

“We wanted visitors to have an immersive experience,” explains Hemdal. “Now we have twice the visitor space and four times the exhibit space because of the changes.”

The aquarium also includes a shark and stingray lagoon where visitors can gently touch fish that glide by in a low tank, an Ocean Lab that invites children to examine sea stars and other animals, and a cylindrical Atlantic moon jellyfish tank where visitors control lighting to enhance the view of the slowly undulating, transparent jellies.

“People can press the red LED lighting button and see the jellies’ tentacles glow, or blue to see internal organs glow. If left in natural light, jellies are almost invisible to be safe in the ocean. It’s a fun exhibit but also teaches kids,” says Hemdal.

It’s tough to choose a most valuable fish in the aquarium because “valuable” can have so many definitions, but Hemdal recognizes the zoo’s two Australian lungfish. The prehistoric-looking creatures can live 75 to 100 years and provide a glimpse of evolutionary history.

The honor could also go to the red dragonfish (also known as Asian arowana) with its metallic scales. The endangered species is prized by many as good luck. The zoo acquired its specimen from a U.S. Fish and Wildlife Service seizure.

“This fish might have been taken from the wild or raised in a pond [at a fish farm]. We just don’t know,” says Hemdal, who adds that the fish can command prices as high as $20,000. “But it couldn’t be released in the wild. I don’t know if it brings good luck or not, but we have this beautiful aquarium now, so who knows?”