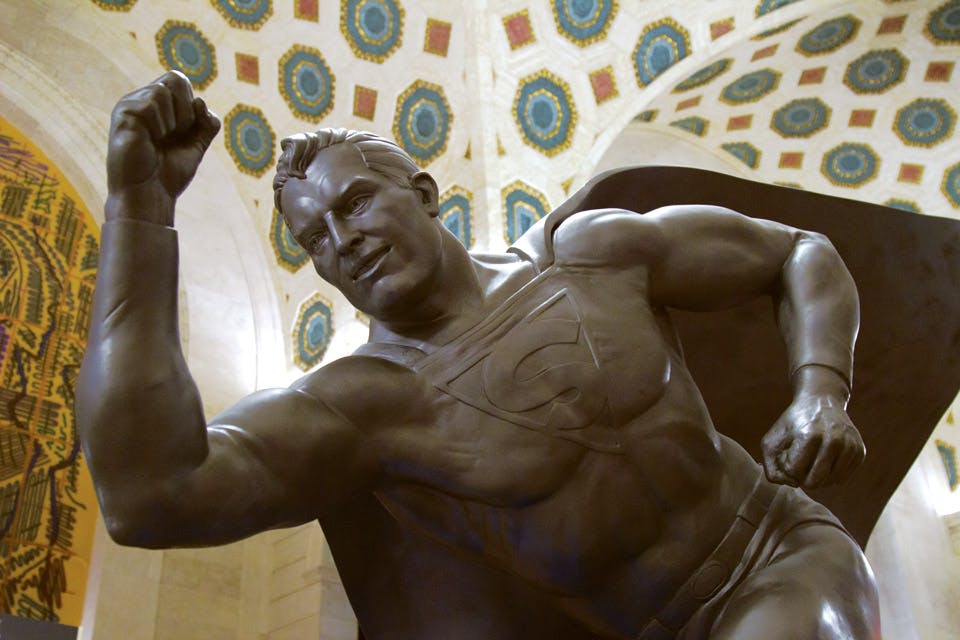 The Cleveland Public Library hosts an exhibition that delves into the Ohio origins and cultural influence of the world’s most famous superhero.

The muscle-bound man in the painting is immediately recognizable, with his red and blue suit and iconic cape flapping behind him. The canvas hung in DC Comics’ New York City office during the 1940s and ’50s. Created by pulp artist H.J. Ward in 1940, the artwork was commissioned to promote the syndicated “The Adventures of Superman” radio series.

But the painting went missing in 1957 and remained that way for more than five decades until art historian David Saunders uncovered it in storage at Lehman College in the Bronx in 2010.

Today, it hangs in the Cleveland Public Library and will remain there through March 31, 2018, as part of “Superman: From Cleveland to Krypton,” an exhibition that explores the Cleveland roots of the superhero’s two creators, Jerry Siegel and Joe Shuster. The two men grew up in the city’s Glenville neighborhood and created Superman in 1938 while they were still teenagers.

“Jerry and Joe used to go to this library all the time,” says Brad Ricca, the Cleveland-based author of Super Boys, a book about the lives of Siegel and Shuster. “[They] would check out their books and sit in this actual room the exhibit is in and hash out this character.”

“Superman: From Cleveland to Krypton” features artifacts tied to and memorabilia inspired by the iconic character, with the majority of pieces coming from the collection of “Dick Tracy” comic strip writer Mike Curtis.

Brandon Routh’s costume from the 2006 film “Superman Returns” stands at the entrance to the exhibition, not far from the writing desk Siegel used while creating many of the original Superman stories. Located in the center of the main exhibition space is a model of the Superman statue that will be installed at a yet-to-be-determined location in Cleveland.

“Once people see that, they will understand that something amazing happened here in the 1930s,” says Mike Olszewski, the president of the nonprofit Siegel & Shuster Society, an organization dedicated to commemorating the men, “and it came from the minds of two teenagers.”