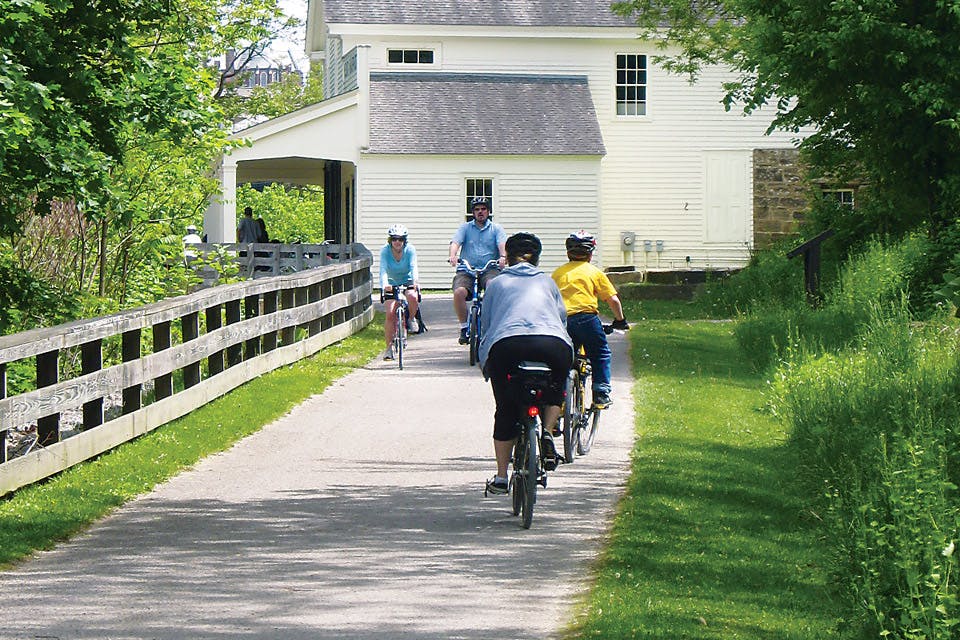 These four attractions offer great ways to get some fresh air and enjoy the arrival of spring.

The Ohio & Erie Canal Towpath Trail covers more than 80 miles between the Cleveland lakefront and the Tuscarawas River Valley. Plaques along the route offer historical insight into Ohio’s century-long canal era, and the crumbling remnants of the locks used to lift boats still remain at several spots.

Summit Metro Parks maintains more than 20 miles of the trail and offers a variety of programs and events for visitors to enjoy. Spring is a particularly popular time to visit for the opportunity to spot migrating birds. On select dates throughout March, a Summit Metro Parks naturalist leads the Waterfowl Watch program along different parks and trails, providing visitors the opportunity to catch a glimpse of these birds as they pass through the area.

“It’s so urban of an area that they kind of layover at these bodies of water,” explains interpretive naturalist Elizabeth Kresse, who will host a few of the upcoming events. “I love that we are able to get people out and teach them about new things, whether it be birds, salamanders or even a tree.”

The Towpath Trail leads from the wooded Cuyahoga Valley National Park into the heart of Akron, where bicyclists can make side trips to Canal Park and the Akron Art Museum. After exploring the city, continue south to check out a floating section of the trail at the southern tip of Summit Lake. The wooden boardwalk takes travelers over the water on their way into Stark County. 330/865-8065, summitmetroparks.org/towpath-trail 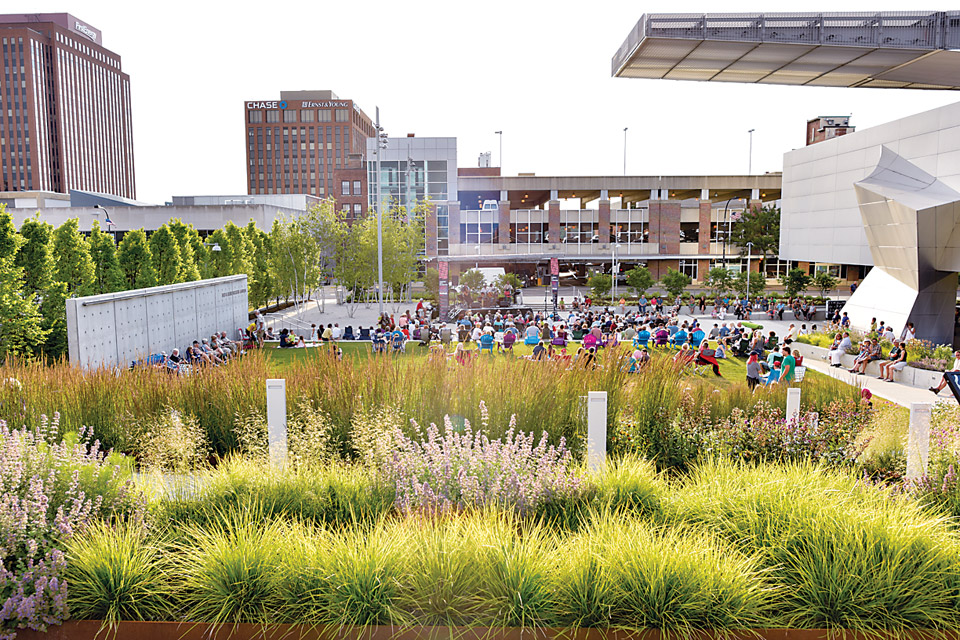 Downtown Akron became a little greener in July 2016 with the opening of the Akron Art Museum’s Bud and Susie Rogers Garden, an inviting and calming space that’s free to visit.

“The city, especially this side of downtown, was in need of not only a green space, but a public space,” says Akron Art Museum director and CEO Mark Masuoka. “It just helps to take the stress away and relax the mind.”

Masuoka says he hopes visitors to the public garden take the time to walk through the 1-acre space’s multiple levels. Viennese architecture firm Coop Himme(l)bau — the company responsible for the museum’s major addition completed in 2007 — designed the organically flowing space that naturally ushers guests from the museum to the garden. The open garden area, designed by landscape architectural firm Olin Partners, offers room to enjoy activities from picnics to yoga, while a zigzagging pathway leads visitors through an eye-catching collection of native plants.

In February, the museum began hosting its first art exhibition in the garden: Two large-scale glazed ceramic sculptures made by Japanese ceramic artist Jun Kaneko. The pieces each stand more than 8 feet tall and are on display through May.

This summer, the museum will present work by Pacific Islander-American designer Sean Connelly as part of the “Front International: Cleveland Triennial for Contemporary Art.” Live music events in the garden begin in June. 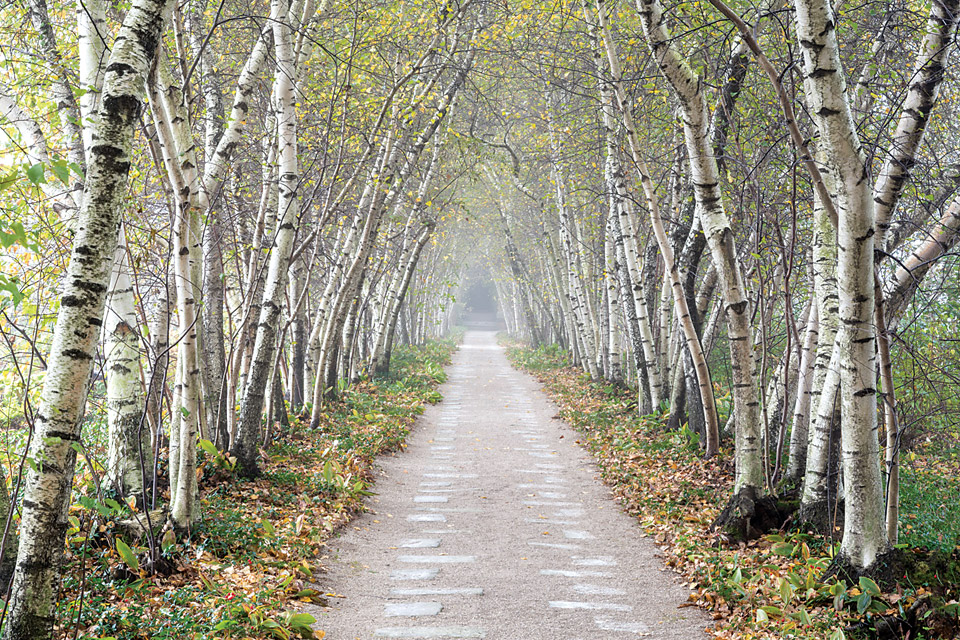 Originally completed in 1915, Stan Hywet Hall & Gardens was the home of Goodyear Tire & Rubber Co. co-founder F.A. Seiberling and his family. Although the 64,500-square-foot manor house is the main attraction, the estate’s 10 historic gardens are just as beautiful as the Seiberling home.

The sprawling 70-acre estate in northwest Akron is the city’s first and largest National Historic Landmark. The family lived there for 40 years before Seiberling’s children gifted the property to the community.

“You don’t see any other buildings, and it’s almost otherworldly,” says Shelley Funai, grounds manager at Stan Hywet Hall & Gardens. “It gives you a sense of escape from everything.”

Redesigned by renowned female landscape architect Ellen Biddle Shipman in 1929, the garden is characterized by a reflecting pool and beautiful statues. The peaceful space is one of only a few Shipman designs still intact and open to the public.

Birch Tree Allée is another of the grounds’ prominent features. More than 250 gray birch trees line the 550-foot outdoor hallway, with their leaves casting speckled light on the walkway leading visitors from the manor house to the lagoon. The pathway is often used in wedding ceremonies on the property. 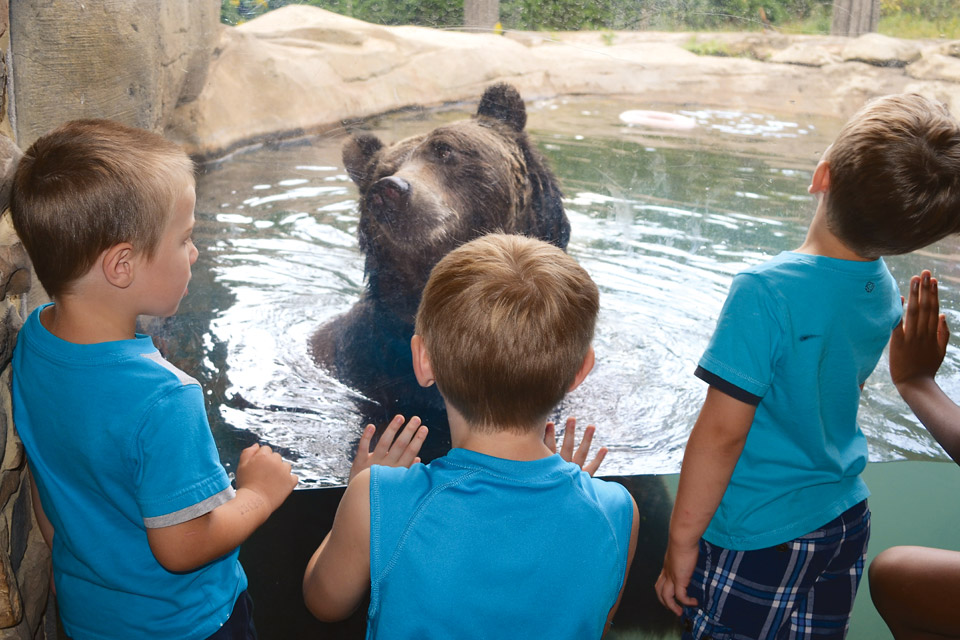 The always-popular lions, tigers and bears are sure to draw oohs and ahhs from visitors of all ages, but with approximately 40 exhibits and more than 700 animals, be sure not to overlook some of the Akron Zoo’s less-common animals, which range from red pandas to capybaras to Komodo dragons.

The zoo’s newest exhibit, Curious Creatures, houses unique animals with unusual adaptations. A favorite is the naked mole rat, the only mammal that lives in colonies built around matriarchal hierarchies similar to those of bees and ants.

“We had a little girl who was over the moon, and the naked mole rat was her favorite animal,” says guest services director Jeannette Andreski. “She just thought they were the cutest things, and ‘cute’ is not necessarily the adjective used to describe them all the time.”

Electric eels can produce up to 600 volts of electric discharge, while the giant Pacific octopus grows bigger and lives longer than other octopus species.

Located just outside of downtown Akron, the zoo continues to grow. Thirty-five of its 70 acres are currently developed, and it has broken attendance records the last two years.

Upcoming events include Breakfast with The Bunny, during which the zoo will provide breakfast, crafts and an Easter egg hunt on the last three weekends of March. 505 Euclid Ave., Akron 44307, 330/375-2550, akronzoo.org