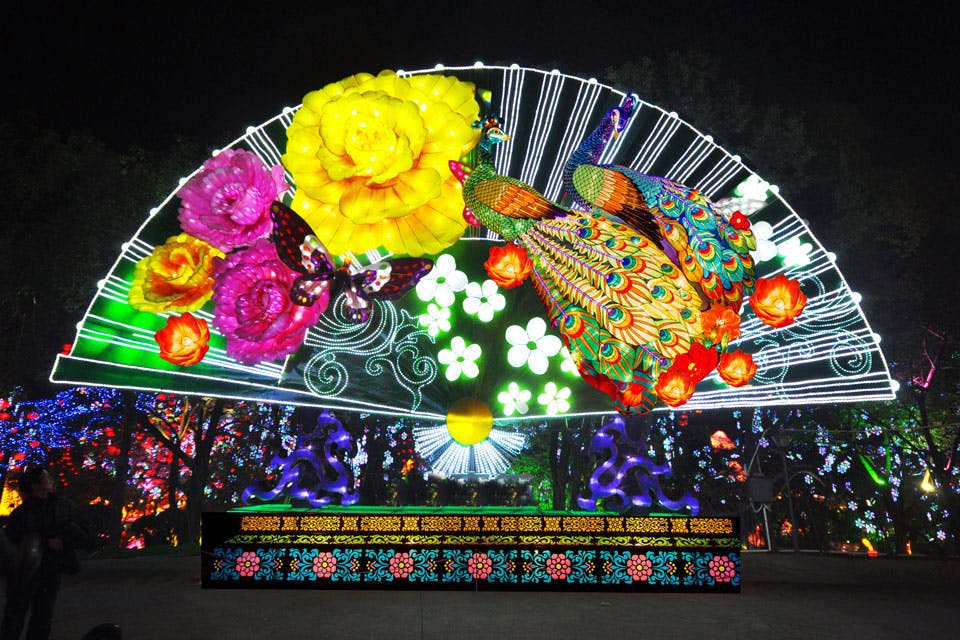 Make the most of the shortest days of the year by checking out one of these four attractions.

For centuries, the Chinese have celebrated the start of their New Year in late January or early February by displaying multicolored lanterns in a range of shapes and sizes. Along with marking the pending arrival of spring, the custom also serves as a showcase of Chinese artistry.

Traditionally, lantern-makers crafted their works of art from bamboo and paper, but these days, Chinese artisans are creating modern-day versions out of metal, silk and energy-efficient LED lighting. Through Jan. 2, Ohioans can experience these works on the Ohio Expo Center grounds, thanks to Ohio Chinese Lantern Festival operations and logistics manager Huiyuan Liu and her team.

“Each lantern carries a different aspect of Chinese culture,” says Liu, “and this is what we wanted to share with people in the United States.”

Red fish, which represent abundance, and dragons, which symbolize power and good luck, are just a couple of the cultural symbols featured in the 39 installations that include more than 1,000 individual lanterns. Along with the Chinese flag and pandas, visitors will find installations featuring Christmas trees and Santa Claus.

Preparations for the display began months ago in China, where the lanterns were assembled and then shipped to the United States to be completed. Among the most impressive works in the exhibition is the illuminated traditional Chinese dragon. The length of six school buses, the dragon’s head alone weighs 600 pounds.

This festival also includes acrobatic performances and food vendors, and Liu is hoping to top the success she has had already in taking the lanterns to other U.S. cities, routinely attracting thousands of viewers during the festival’s run. 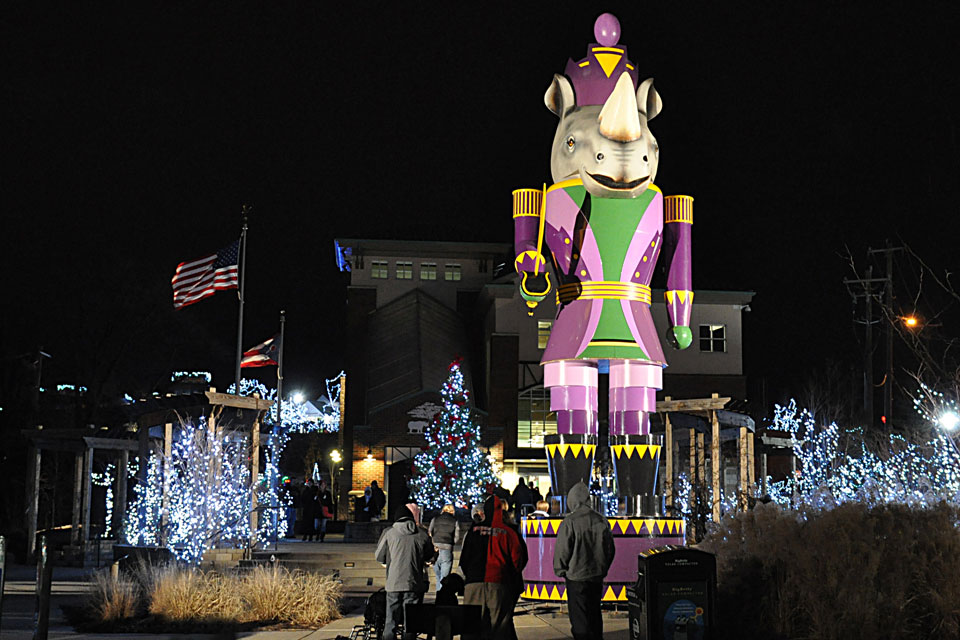 The Festival of Lights drew more than 240,000 visitors to the Cincinnati Zoo during the holidays last year. (photo by Kathy Newton)

In one area, a tree seems to hover above the surface of a pond. In another, guests are invited to walk through a glowing, rainbow-hued tunnel. What’s happening at the Cincinnati Zoo & Botanical Garden’s Festival of Lights goes far beyond the standard snowflake-and-sugarplum fare.

That’s not to say there isn’t a sense of tradition in this annual event that drew more than 240,000 visitors last Christmas season and has been around for the past 34 years. That tradition starts with the illumination of a 35-foot Christmas tree at the zoo’s entrance.

“When that tree pops on, it means the Festival of Lights is ready to go,” says Susan Ludwig, the zoo’s special events manager. “There’s not much of the park that we don’t put a Christmas light on.”

Although the festival is a longstanding tradition, zoo staffers have reimagined it over the years and upgraded from its original, simpler lighting displays. The switch from incandescent to LED lighting conserved energy while expanding design options, and the addition of Toy Land Express train rides and the Madcap Puppet Show add to the thrill.

“There’s a lot to do — a lot to see,” Ludwig says. “You almost hit all of your senses when you get here. It can be overwhelming, but overwhelming in a good way.”

Despite the technological upgrades that have deepened the complexity of the lights on display, there are still classic reminders of joy sprinkled throughout the zoo, including the scripted “Believe” sign that has become a festival favorite. 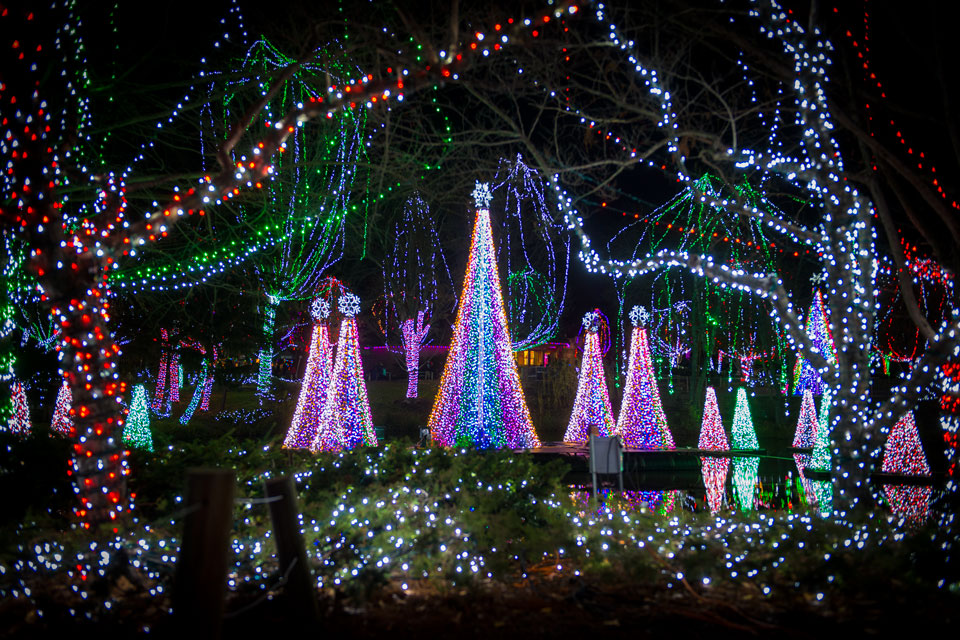 The Columbus Zoo and Aquarium has had a seasonal light display since 1988. Guests can enjoy the carousel and other attractions. (photo by Grahm S. Jones)

More than 3 million individual lights bring 400,000 evening visitors to the Columbus Zoo and Aquarium each holiday season. Six of the zoo’s eight regions are set aglow for guests to enjoy and show just how much the annual celebration has evolved since a small group of zoo employees banded together in 1988 to create a special event for the holidays.

“We were looking to do something to increase attendance and raise some money,” says Jeff Glorioso, director of experiential marketing at the Columbus Zoo and Aquarium. “A few strands of lights and a tray of cookies have come a long way.”

A grounds crew of 40 workers begins creating the annual display each September in order to complete it in time for its November unveiling, and the zoo uses energy-efficient LED lights as part of its ongoing Earth-friendly efforts. “Our conservation message and being green is important to us,” explains Glorioso.

Along with the lighting displays, which feature different color schemes depending on where guests are in the zoo, visitors can also enjoy attractions such as Tinseltown: A Pop Culture Christmas, featuring exhibits that pay tribute to classic holiday films and tales ranging from “A Christmas Story” to “The Nutcracker.”

There’s also an outdoor ice-skating rink, photographs with Santa Claus and even an animated polar bear band dubbed the Oakridge Bears to discover as guests explore the zoo. One of the most impressive attractions, however, is the Sparkling Spruce. This tree, animated with lights set to holiday music, stands 42 feet tall. 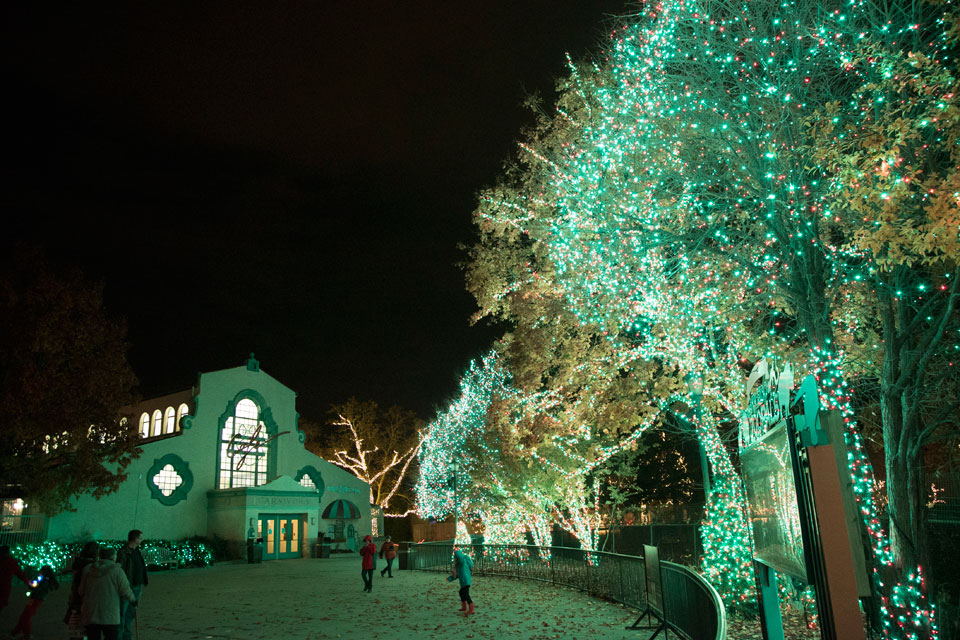 The 85-foot-tall Norway spruce covered with lights is an attention-getter, for sure. But it is just one of the attractions at the Toledo Zoo & Aquarium’s Lights Before Christmas. The annual lighting display, which began in 1986, is now a tradition that drew more than 200,000 visitors last year to view the 1 million lights on display.

“This started with just 50,000 lights and has grown each year since then,” says Shayla Moriarty, the zoo’s director of communications. “This has become a big tradition here, and each year we try to up the quality of the lights.”

Set-up for the more than 1 million lights and 200 illuminated motion images that wind throughout the zoo’s grounds begins in early August.

“The pride that our employees take in putting together such an intricate lighting system is what makes this display special,” Moriarty says. “When you come here, you really feel that pride and the tradition of the holiday.”

But the lights are just part of the fun. Visitors to the Winter Village, located at the zoo’s historic amphitheater, can get behind the wheel of bumper cars on ice or experience the rush of taking on an outdoor ice slide.

Those who venture inside the zoo’s aquarium can check out Santa Claus swimming among the black tip reef sharks and tropical fish.

Visitors can also enjoy hot chocolate, homemade fudge, sugar cookies and other holiday treats decorated with zoo and Christmas themes. Moriarty says they’re nearly as big of a draw as the lights.

“Our homemade fudge and baked goods have become very well-known in the Toledo area,” she says. “People come from all over to experience this tradition. It has become just as known as the lights.” Sun.–Thur. 3–8 p.m., Fri.–Sat. 3–9 p.m. through Dec. 31 (closed Christmas Eve and Christmas Day); visit website for admission information; 2 Hippo Way, Toledo 43609, 419/385-5721, toledozoo.org