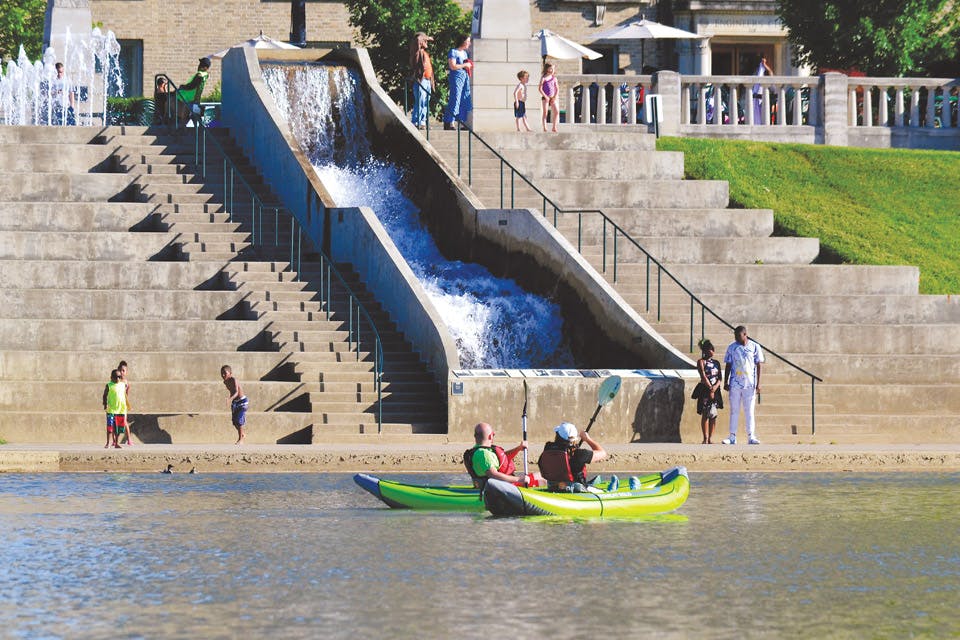 Stretching 99 miles from Sidney to Hamilton, the Great Miami Riverway is a hot spot for fun on and off the water, including these six stops in the heart of Dayton

June 2019
BY Casey Mazzoli | All photos courtesy of destinations listed

June 2019
BY Casey Mazzoli | All photos courtesy of destinations listed

The Great Miami Riverway spans 99 miles, stretching from Sidney to Hamilton and offering a wealth of places to hike, paddle, shop, dine and tour. Dayton shines as a must-visit spot along the route, with a large concentration of sights and activities. The creative and historic city offers experiences ranging from guided kayak outings to a brewery that makes beer just like they did in the 19th century. Here are six great Dayton stops to get you started.

RiverScape MetroPark
Every hour, the Five Rivers Fountain of Lights sends a spray of water 200 feet into the air and 400 feet across the confluence of the Great Miami and Mad rivers. It has become an extension of the city’s skyline since it was unveiled in 2001. RiverScape MetroPark, where the fountain is located, offers a place for outdoor adventurers to set off on their explorations as well. The park connects with 340 miles of paved multi-use trails and certified instructors offer classes in fishing, cycling, backpacking and kayaking. The kayaking program even takes participants through the two manmade whitewater features that draw paddlers to this stretch of the river. “It’s a bucket list thing to do to get out there and to paddle underneath the fountains when they’re going off,” says Erik Dahlstrom, outdoor coordinator for Five Rivers MetroParks. 237 E. Monument Ave., Dayton 45402, 937/274-0126, metroparks.org

Omega Music
Visit Dayton’s Oregon Historic District and you’ll find classic buildings housing contemporary shops, including Omega Music. The record store, which opened in 1983, continues to capture the area’s blend of old and new. Owner Alex Staiger, son of founder Gary Staiger, speaks with pride of his shop’s range of music and customers. “Stivers School for the Arts is just down the street, so we get art school students stopping by after class,” he says, “or the lawyer on his lunch break coming by downtown, or parents bringing their kids in, too.” With everything from vinyl records to stereo equipment, you’ll get the classic music store experience and likely leave with some new tunes. 318 E. Fifth St., Dayton 45402, 937/275-9949, omegamusicdayton.com 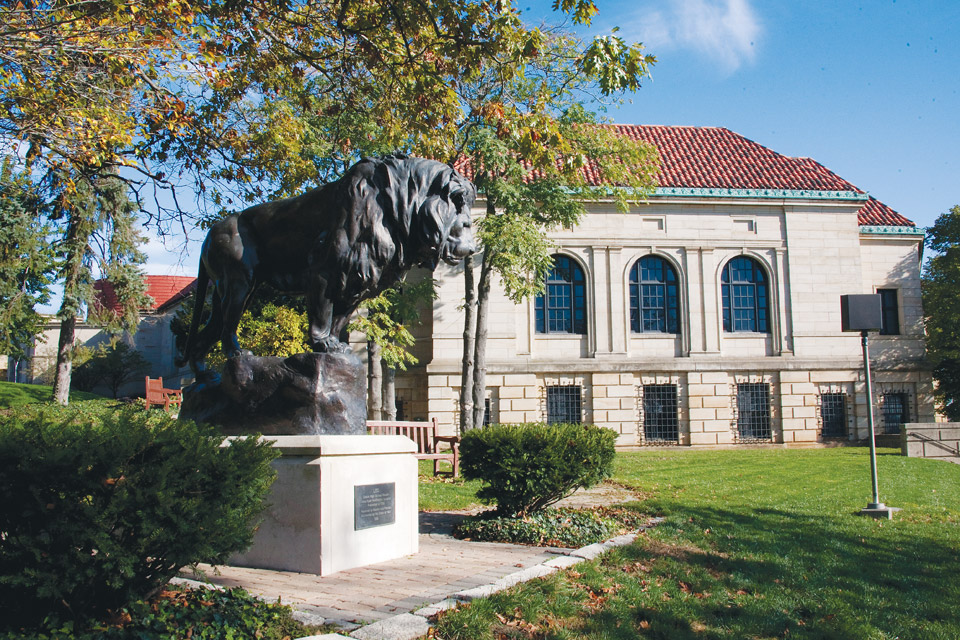 Dayton Aviation Heritage National Historical Park
Cyclists and history buffs alike can trace the steps of Orville and Wilbur Wright at the Dayton Aviation Heritage National Historical Park. The park’s six sites include the Wright Cycle Co. bicycle shop, where the brothers ran their business from 1895 to 1897. “The bicycle that we ride today, for the most part, has been around since the mid-1880s,” says Ryan Qualls, the park’s acting chief of interpretation. The brothers’ long-lasting work took off from cycling to developing the foundations of flight. Discover the story on guided tours through the Wrights’ historic neighborhood and visit their practice grounds at the nearby Huffman Prairie Flying Field. You can also visit the Paul Laurence Dunbar House to see a short film and learn about the acclaimed poet’s monumental body of work. Plus find out how his life intersected with the Wright brothers’ print shop in 1890. 16 S. Williams St., Dayton 45402, 937/225-7705, nps.gov/daav

Carillon Brewing Co.
You won’t find any modern brewing tools at Carillon Brewing Co. It’s the only place in the U.S. where you can see the entire historical brewing process and then drink the beer produced by it. Dayton History president & CEO Brady Kress ensured that every detail down to the timbers of the building was fashioned in pre-Civil War manner. Watch costumed interpreters demonstrate tools like a stone mill and copper kettles, then sit at a handmade table to try the results. “All of our beers at the very least are inspired by what would have been brewed in Dayton in the 1850s,” explains head brewer Kyle Spears. He points to the coriander ale as an example, which the Carillon team found in a manual from 1831. The brewer-for-a-day program lets you chop wood, build a fire and make crackers with leftover grain. Then, come back a few weeks later to fill up a growler of your personal brew. 1000 Carillon Blvd., Dayton 45409, 937/910-0722, carillonbrewingco.org 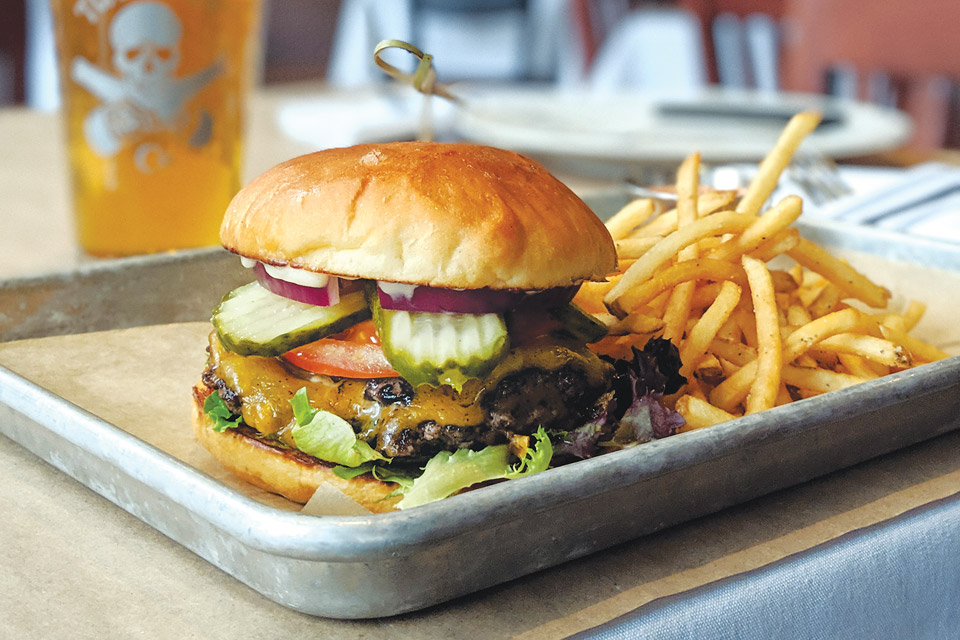 Table 33
Curl up in a cozy armchair or gather around a table with friends at Table 33 in downtown Dayton. The modern cafe serves brunch five days a week and dinner three evenings a week — from scratch and often with locally sourced ingredients. Be sure to add a drink to your order, because Table 33 presses its fresh vision into an impressive beverage menu. “We wanted to create a space where, no matter how late you were getting into work downtown, you could come and start your day,” explains Table 33 co-owner Chris Harrison. “Based on our travels and experiences, we knew we wanted a fresh juice program to be part of that.” Try the bright orange Sup Doc, a carrot juice complemented by orange, ginger and lemon. If you’re looking for something with a kick to it, go for the Gin E. Pig cocktail that drinks like a sparkling lemonade paired with gin. 130 W. Second St., Dayton 45402, 937/999-3070, table33dayton.com