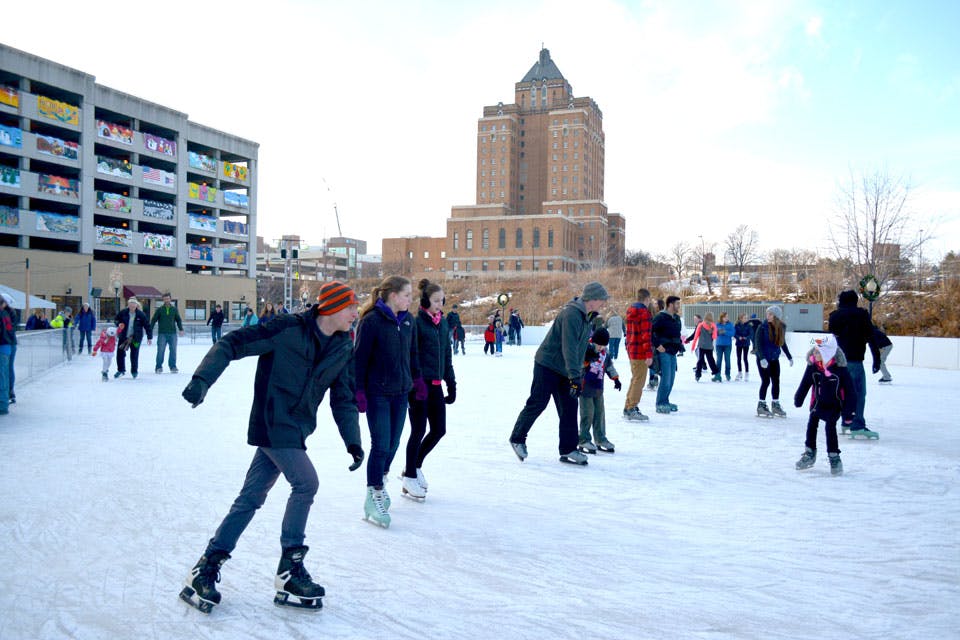 Akron: Eat, Drink and Be Merry

Akron shines during the holidays. Check out these six spots that deliver food, drinks and fun.

Nuevo: The vibrant murals adorning the walls at Nuevo are the perfect complement to chef and owner Zack Hirt’s modern Mexican food. Housed in a former art gallery, the restaurant greets guests with creative margaritas and a lineup of inventive fresh guacamoles, including a fan favorite filled with pickled peaches, goat cheese and hazelnuts.

Hirt opened the restaurant nearly three years ago, when his family craved Mexican food in Akron that was a step above the chains but accessible to the everyday eater.
“We found ourselves going up to Cleveland to eat at a modern Mexican restaurant,” he says, “so we thought, let’s build one down here.”

Guests can customize their margaritas by flavor and what they’d like on the rim of the glass, and the menu features an array of options, ranging from classic carnitas and tacos to a lineup of Mexican-inspired entrees. 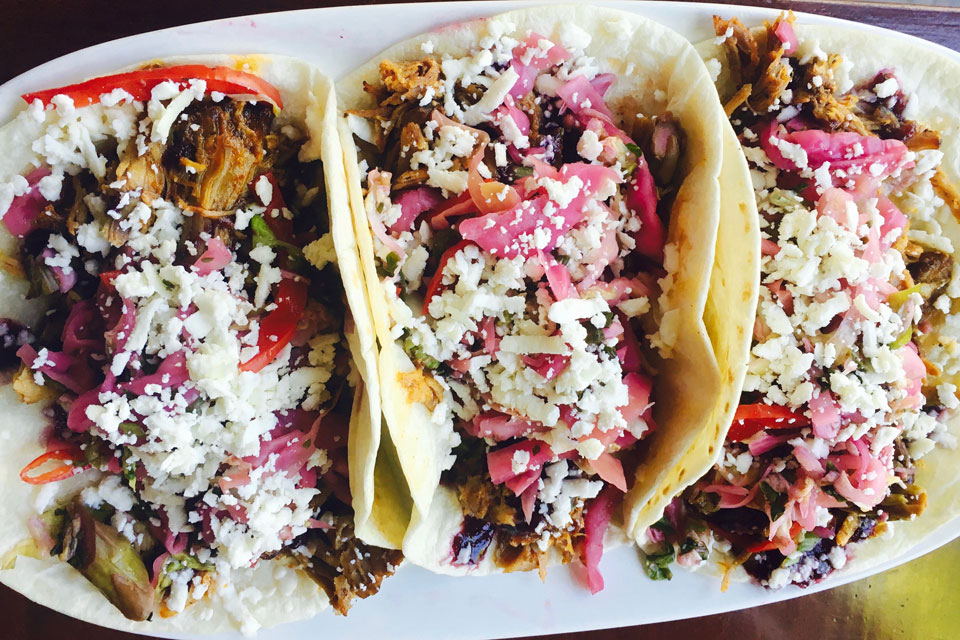 Zach Hirt opened Nuevo nearly three years ago, when his family craved Mexican food in Akron that was a step above the chains but accessible to the everyday eater. (photo courtesy of Nuevo)

DBA: Located along the edge of downtown Akron, this rock ’n’ roll-themed restaurant and bar serves American cuisine while embracing a fun swagger. Chef and owner Dante Boccuzzi infuses his downtown spot with color and movement — a perfect backdrop for dishes that merge his love for performance with his culinary pedigree.

“I’ve traveled all over the country, the world,” Boccuzzi says, “and that comes through.”

The menu here is divided into “Opening Acts” and “Headliners.” Plenty of vegetarian options and creative dishes — such as the always-on-the-menu green spaghetti (made with fire-poached garlic shrimp and braised spinach and topped with a breaded-cheese crumble) — have cemented the place as one of the star’s of Akron’s downtown dining scene.

That rock-star approach carries through to the check, which arrives with a guitar pick bearing the DBA logo — a final touch from Boccuzzi, who also happens to be a great guitarist. 21 Furnace St., Suite 402, Akron 44308, 330/375-5050, danteakron.com

Hoppin’ Frog Brewery: Fred Karm’s Hoppin’ Frog Brewery is housed in an unassuming industrial park a short drive from downtown Akron. But once you step inside the craft brewer’s tasting room, it’s easy to understand why this slightly-out-of-the-way spot is a favorite for beer-lovers.

“It’s clean, bright and cozy,” says Karm. “It feels like home.” That is, if home has a lineup of craft brews on tap ranging from the B.O.R.I.S. the Crusher Oatmeal Imperial Stout to the Barrel-Aged Frosted Frog Christmas Ale.

Creativity is always flowing here, whether it’s the brewery’s Tadpole Series, where a special brew is on tap for one day only, or Tower Tuesdays, during which one of Hoppin’ Frog’s beers is infused with coffee beans or chilies. 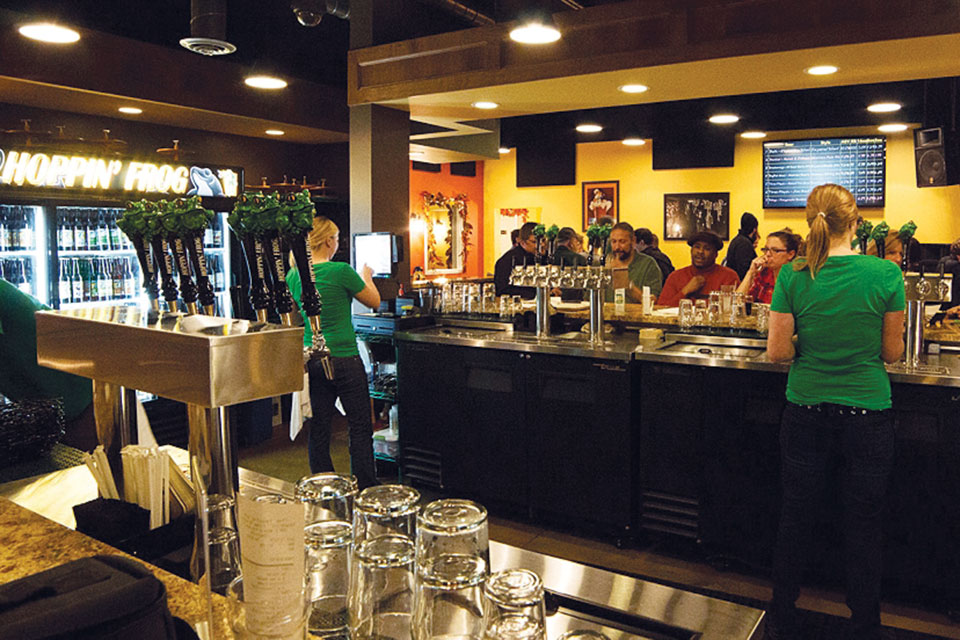 Old 97: Old 97 has served as a local pub since the 1940s, when it was the last stop on Akron’s now-defunct trolley line. The building that houses the bar has been around even longer. Built nearly a century ago, it’ll mark its centennial in 2017.

Although the interior has been completely renovated, Old 97 still sets a retro mood with its carved-wood details and low lighting that make for a sophisticated-yet-comfortable place to hang out.

“It’s a combination of the atmosphere and the elegance, but it’s not pretentious,” says co-owner Deborah Chapman, when asked about the bar’s allure. “The atmosphere is almost romantic, but it’s a lot of fun, too.”

Cocktails rule here with more than a dozen options, ranging from Chocolate Pretzel and White Cosmo martinis to the Roger That (vodka, gin, Lillet, ginger liqueur and fresh lemon) and the Mr. James (vodka, soda, cranberry juice and a Luxardo cherry).

Along with its impressive drink list, the bar also offers a small food menu of fresh and local dishes that change with the seasons. Options range from shrimp shooters to crab-stuffed mushrooms to flatbreads. 1503 Kenmore Blvd., Akron 44314, 330/745-5493, theold97.com

Lock 3: Since opening in 2003, Lock 3 has been the place for summer concerts and festivals. But the popular spot in the heart of downtown Akron also welcomes thousands of visitors during the holidays.

“Akronites love to bring their out-of-town guests here to show them all that our city has to offer,” says Tish Jernigan, general manager for Lock 3. “More than 60,000 visitors join us each holiday season for our special events.”

Home to Ohio’s largest seasonal ice-skating rink, which offers free admission and $3 skate rental, Lock 3 presents a litany of activities. Kids 14 and under can glide down Reindeer Run, a 150-foot-long polymer-coated slide, while their parents can get a jump on holiday shopping at Cottage Mart, an outdoor marketplace featuring crafts made by northeast Ohio artisans.

On select weekends, Santa hosts a breakfast that includes pancakes, sausage, hot chocolate and orange juice, and Lock 3’s concession stand offers an array of chili, soup and beer from Thirsty Dog Brewing Co. to ward off winter’s chill. You can also make plans to ring in 2017 at First Night, Akron’s family-friendly celebration that culminates in a fireworks extravaganza on Dec. 31. 200 Main St., Akron 44308, lock3live.com

Ballet Theatre of Ohio’s ‘Nutcracker’: The magic of Ballet Theatre of Ohio’s production of “Nutcracker” begins the minute the audience steps into the 87-year-old Akron Civic Theatre. In the lobby, a 20-foot-tall fir decorated with ballet pointe shoes fashioned to resemble characters from Tchaikovsky’s celebrated classic greets visitors while they wait to have their photo taken with Santa and visit his workshop located in the grand mezzanine.

“What we create with each of our performances is not just a trip to the ballet. It is a total theatrical experience,” says artistic director Christine Meneer, who founded the dance troupe in 1993. “There is so much to see before you enter the auditorium. Over the years, families have made this the setting for the holiday photo they take for their Christmas card.”

That enchantment continues on stage. The dazzling production, which runs Nov. 26 through Dec. 4, features 100 cast members from Summit and surrounding counties who delight in sharing the timeless tale. Since the Ballet Theatre of Ohio’s version of “Nutcracker” debuted 24 seasons ago, Meneer estimates that more than 275,000 patrons have seen it. 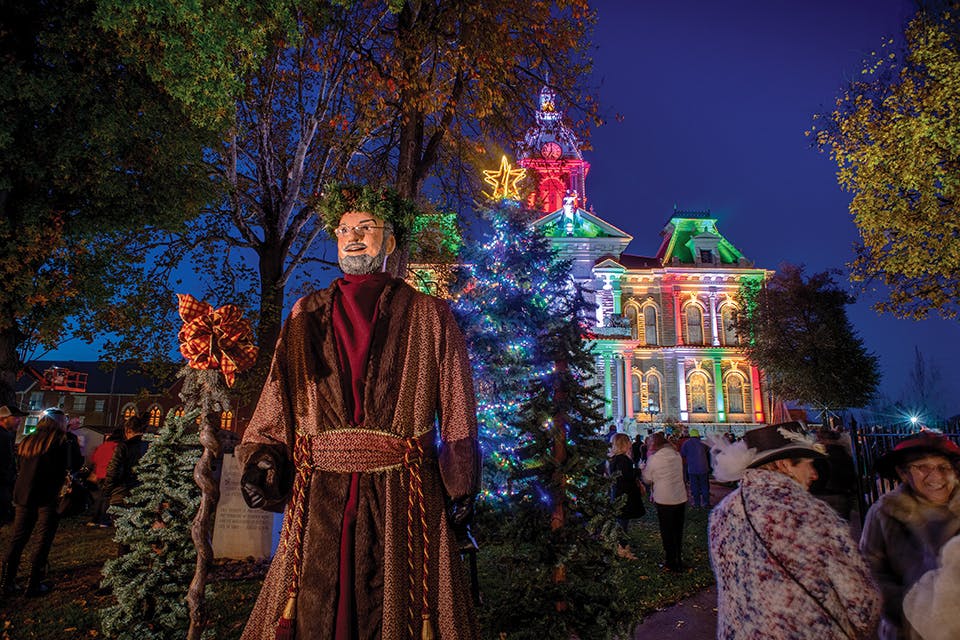 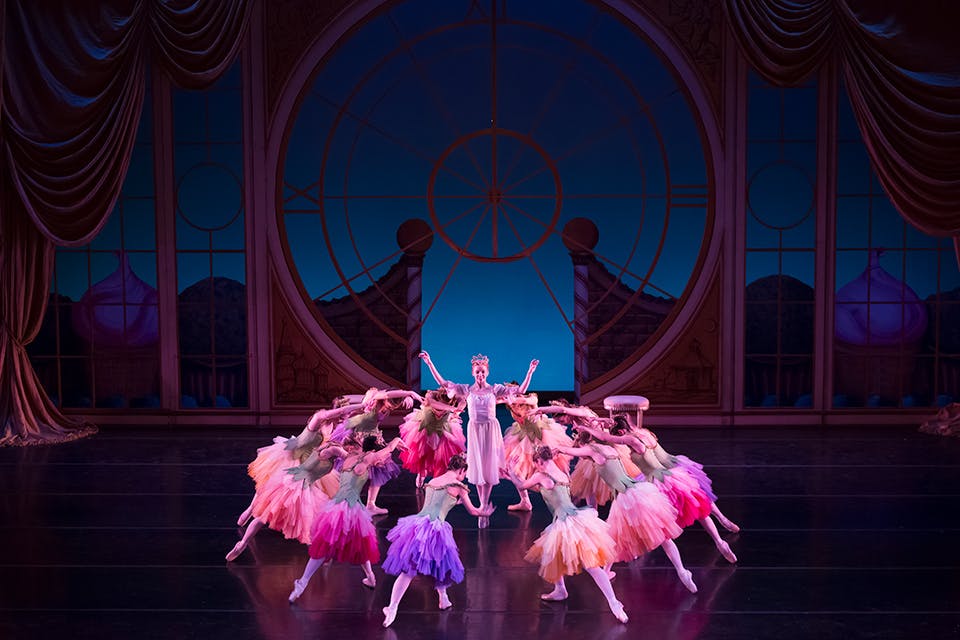 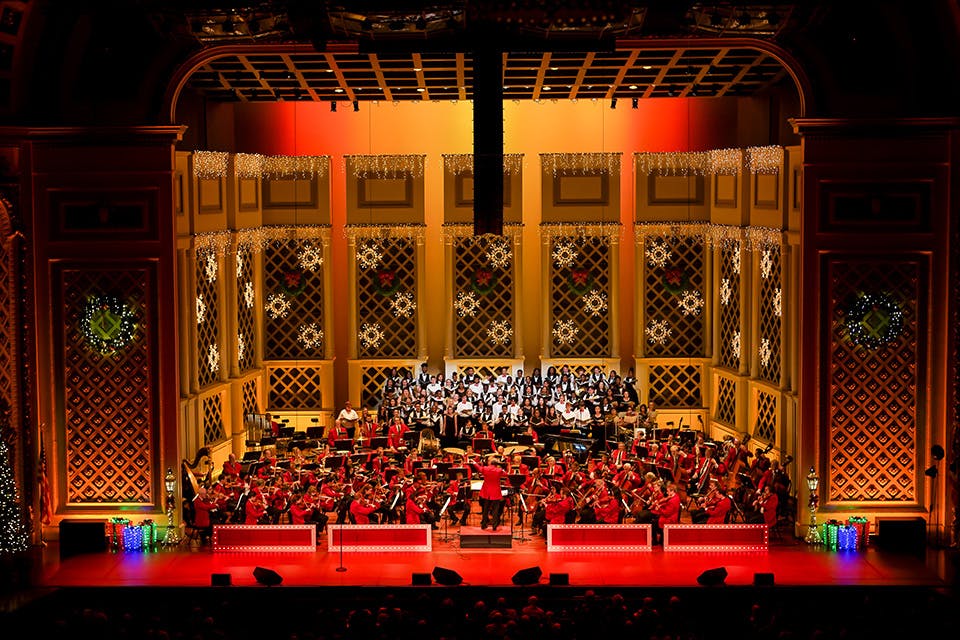