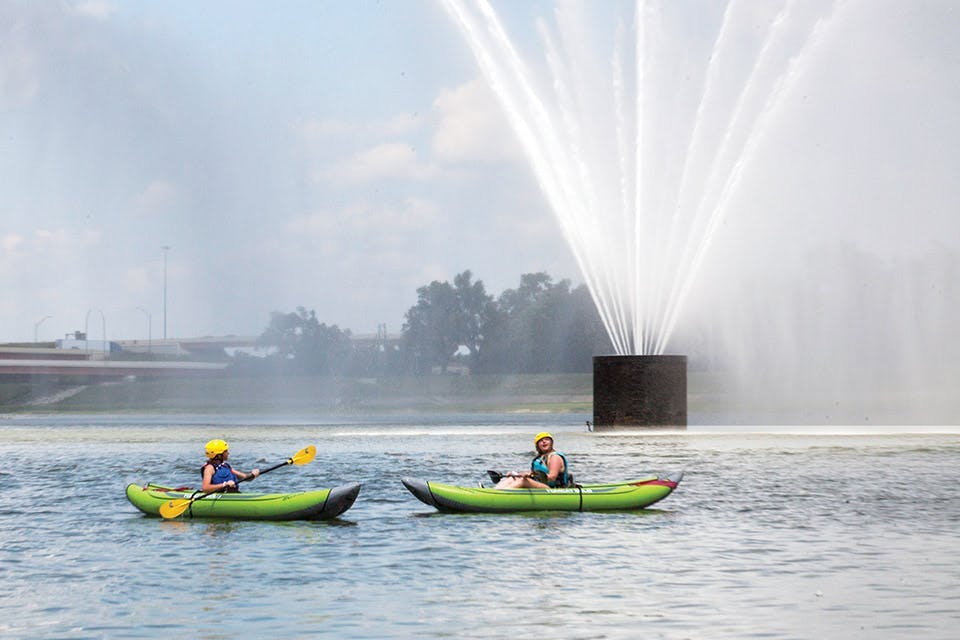 Whether you want to pedal, paddle or lift a pint, the city of Dayton and the Great Miami Riverway have a lot to explore.

As Ohio’s only federally designated national water trail, the Great Miami Riverway offers an array of activities along its 99 miles of river and paved paths. The riverway has helped cities and towns along its route repurpose properties and bring new opportunities to the communities and those who visit them.

“We’ve got 20 partners — cities, counties, park districts — who banded together about five years ago to really use the river as a way to promote economic growth in each community,” says Dan Foley, director of the Great Miami Riverway.

Along the riverway, travelers will find a variety of themed trails to encourage exploration, including the Sweet Treats Trail and the Coffee Lover’s Trail, which run along a stretch of the Great Miami River and include stops in a variety of historic towns along the route.

“Each of these communities from Sidney all the way to Hamilton are unique,” Foley adds. “They’re authentic.”

Outdoor adventurers can paddle the Great Miami River, including the same stretch where Orville Wright once tested the hydroplane. Other Wright brothers points of interest along the riverway include Dayton’s Carillon Historical Park, which has the Wright Flyer III on public view. There’s also an on-site working brewery and restaurant that shows how beer was made during the 1850s.

“There’s great arts and culture in these communities, great local restaurants, great local retail,” Foley says. “We think people are attracted to the river not only to do business, but to live and to play.” For more information, visit greatmiamiriverway.com. 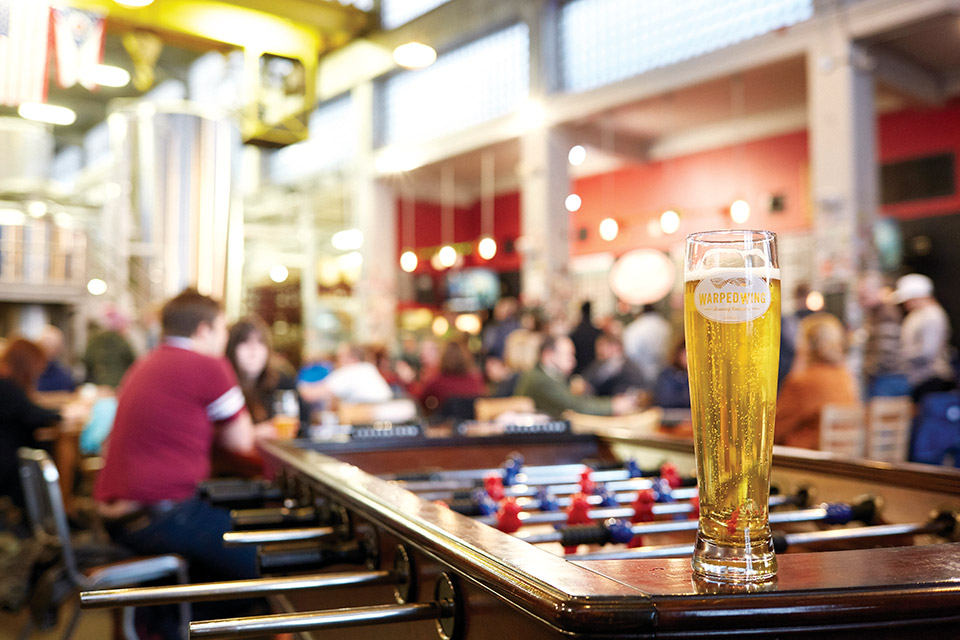 Launched in 2018, the Gem City’s tour of local breweries has grown to include nearly 30 locations and offers a reward for those who want to sample the variety of brews that the area has to offer.

Passport books are available at any of the Dayton Ale Trail’s participating breweries. Collect stamps by making a purchase at each one. Once you’ve collected all the stamps, turn in the passport and claim your prize at Dayton’s Yellow Cab Tavern. The reward changes each year, with 2021’s being a glass designed and shaped to look like a keg of beer.

“One of the coolest things about the entire passport book is the fact that the breweries work on it together themselves,” says Michael Muncy, head brewer at Hairless Hare Brewery in Vandalia. Muncy helped develop the Dayton Ale Trail concept after being inspired by the Kentucky Bourbon Trail. 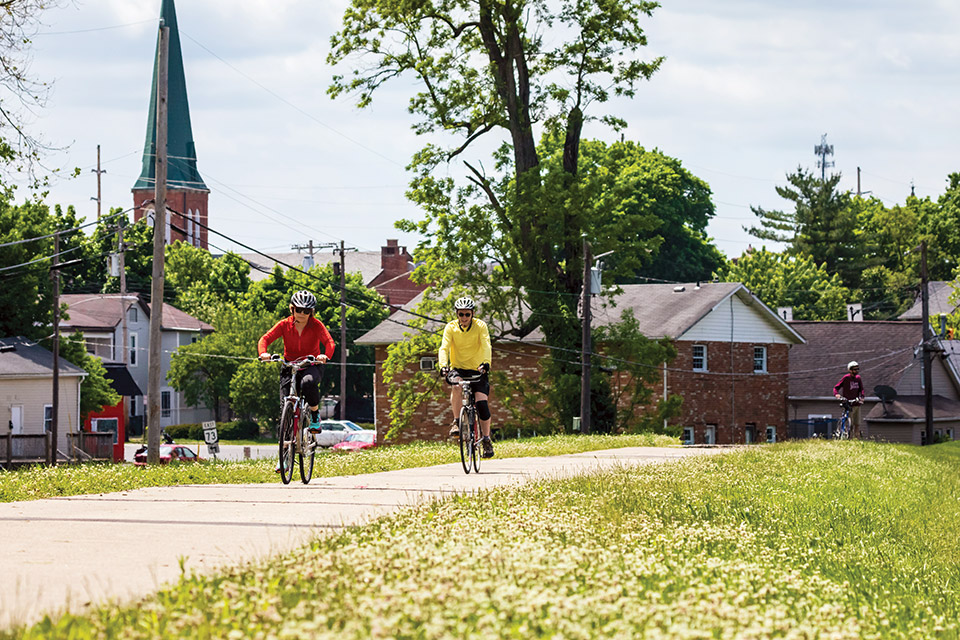 Take in the beauty and history of Ohio on more than 350 miles of pathways within the Miami Valley Trail Network. As the largest paved trail network in the United States, the system provides views of Ohio woodlands and the Dayton skyline alike, depending where you are along its route.

“The uniqueness of the Great Miami Trail is the variety,” says Angela Manuszak, special projects coordinator for the Miami Conservancy District.

The Great Miami River Trail passes through Butler, Miami, Montgomery and Warren counties, making it an accessible area to bike, run or take a closer look at nature.

“It’s just a lot of fun to explore all the nooks and crannies and things that are right along the trail,” Manuszak adds.

Horace Huffman, former president of the Huffy Corp. and co-founder of the Dayton Cycling Club, formed the Great Dayton Bikeway Committee in the mid-1960s, finding that the city had an optimal location for a path along the Great Miami River. Each year, the trail network hosts collaborations and events including the Miami Valley Cycling Summit and festivals that the whole family can enjoy. Visit miamivalleytrails.org for more information about the Miami Valley Trail Network. 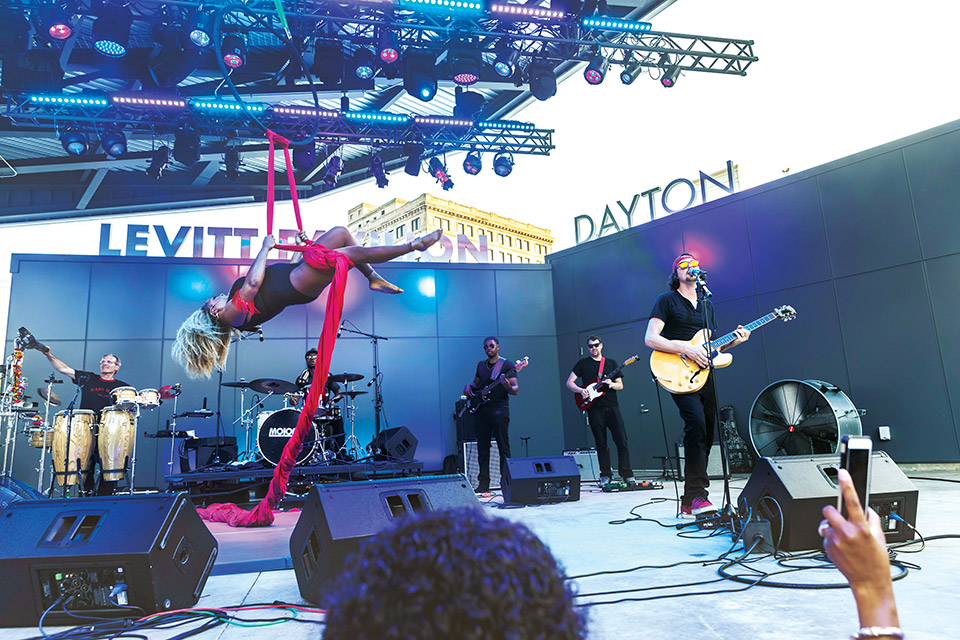 Since opening in 2018, Levitt Pavilion Dayton has helped create a new sense of community in the city by welcoming thousands of attendees downtown to enjoy a free summer music series that promises something for everyone.

The nonprofit music venue has 41 free and family-friendly concerts scheduled for 2021, starting June 12. The outdoor stage, lawn and surrounding park combined cover almost a full city block, and the venue has filled the void in Dayton’s music scene following the end of the Cityfolk Festival in 2013. The Mortimer & Mimi Levitt Foundation, which was founded in 1963, funds the building or renovation of music venues on public land throughout the United States. With eight permanent locations so far, the foundation also provides partial funding for the Friends of Levitt Pavilion Dayton nonprofit partner that manages the concert series.

“You can see anything from bluegrass to hip-hop to R&B to jazz,” says Madeline Hart, director of outreach and community engagement for Levitt Pavilion Dayton. The open lawn seating allows concertgoers to bring well-behaved and leashed dogs, too.

The full 2021 summer concert schedule was set to be announced May 20, with concerts scheduled every Thursday, Friday and Saturday with the exception of July 4 weekend.

“Our mission is building community through music, one free concert at a time,” Hart says. “We believe that by breaking down that barrier to access to high-caliber, live performing arts … everybody is able to partake in what live music can do.” 134 S. Main St., Dayton 45402, 937/281-2144, levittdayton.org

Now Showing
After exploring the outdoors, check out these exhibitions at two can’t-miss Dayton institutions.
National Museum of the United States Air Force: This summer, a visit to the National Museum of the United States Air Force also includes a trip beyond our atmosphere with “Space: A Journey to Our Future.” Running through Sept. 6, the traveling exhibition looks back to the beginnings of space travel as well as our plans for tomorrow. “Space: A Journey to Our Future” takes a hands-on approach, inviting visitors to touch a moon rock and a meteorite from Mars, design a spaceship and organize a space colony by way of fun, interactive exhibits that capture the imagination. Walk through a Mars Base Camp habitat or take a ride on a bicycle-powered centrifuge. Featuring content provided by NASA, the exhibition is great for adults and kids alike. 1100 Spaatz St., Wright-Patterson AFB 45433, 937/255-3286, nationalmuseum.af.mil

Dayton Art Institute: After a temporary closure, the Dayton Art Institute reopened to the public in the spring. Current exhibitions include “Bukang Y. Kim: Journey to the East,” featuring a series of 10 paintings by the internationally recognized, Cincinnati-based artist (through Aug. 15); “All By Myself: Japanese Creative Prints,” showcasing works by several artists within the sosaku-hanga movement (through Sept. 19); and “Changing Times: Art of the 1960s,” highlighting how visual art reflected the social and political shifts of the era (through Sept. 12). Upcoming exhibitions include “Norman Rockwell: Stories of Emotion,” a Dayton Art Institute exclusive featuring paintings and drawings on loan from a private collection (Oct. 23 through Feb. 13, 2022). 456 Belmonte Park N., Dayton 45405, 937/223-4278, daytonartinstitute.org