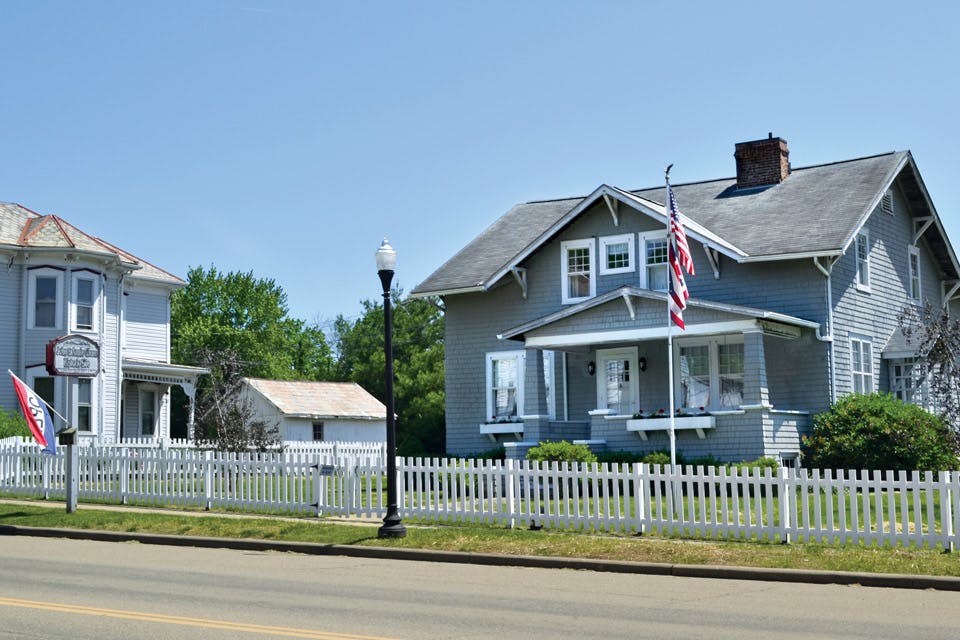 A drive across Ohio on the first federally funded road offers a glimpse of a simpler era.

Historic Downtown Cambridge
The history of Cambridge stretches back more than two centuries, to a time when the area served as a stopping point for settlers traveling westward through southeast Ohio. “Cambridge was established when men who were following the portions of the National Road originally known as Zane’s Trace discovered Wills Creek that runs through our downtown,” explains Debbie Robinson, executive director of the Cambridge/Guernsey County Visitors and Convention Bureau. “It was just a natural stop. … [It was] a place to build restaurants and hotels.” The buildings that blossomed there over the course of the 19th century can be explored today thanks to a 31-stop, self-guided walking tour available from the local visitors bureau. One of the highlights is the Guernsey County Courthouse, a display of Second Empire architecture built in 1883. In recent years, it’s become a focal point of holiday celebrations in Cambridge. “We think it is the only public building that we can find that actually has a light and music show,” Robinson says. Courthouse Square, Cambridge 43725, visitguernseycounty.com

National Museum of Cambridge Glass
From the first piece of glass it produced in 1902 — a pitcher — to now-coveted lines of colored glassware such as Crown Tuscan, the Cambridge Glass Co. became synonymous with quality glass production, gaining worldwide notoriety during the first half of the 20th century. The National Museum of Cambridge Glass houses more than 8,000 pieces from the collections the company produced up until 1954. Each year, the museum’s display rooms showcase different designs. The Rose Point collection is currently on display as it was in the company’s original showroom in the 1940s. “The Cambridge Glass Co. marketed [this set] to a lot of brides,” says Cindy Arent, volunteer museum director. “We have a mannequin dressed in a ’40s wedding dress in there, and people are allowed to go through the door, into the past and shop Rose Point like they would have many years ago.” The museum’s guided tours also find visitors donning glass-worker uniforms and sketching designs on paper from some of the company’s original etching plates. Wed.–Sun., April–October; 136 S. Ninth St., Cambridge 43725, 740/432-4245, cambridgeglass.org

John & Annie Glenn Historic Site
Before John Glenn became a national hero as the first American to orbit the Earth, he was a boy growing up in New Concord, Ohio. The John & Annie Glenn Historic Site provides visitors the chance to step back in time and see the origins of an American icon. A replica of Glenn’s boyhood bedroom includes balsa wood model airplanes hanging from the ceiling, while two other rooms are filled with military and space memorabilia. Furnishings from Annie Glenn’s family decorate the home and are emblematic of the couple’s lifelong relationship (their parents were friends). Aside from the Glenns’ personal lives, the home speaks to a larger history — that of an American family living through the Great Depression and the realities of life on the home front during World War II. “It starts conversations between generations,” says director of operations, Debbie Allender. “When grandparents bring their grandkids through, they can say, ‘This is how it used to be.’ ” Wed.–Sun., May–October; 72 W. Main St., New Concord 43762, 740/826-3305, johnglennhome.org 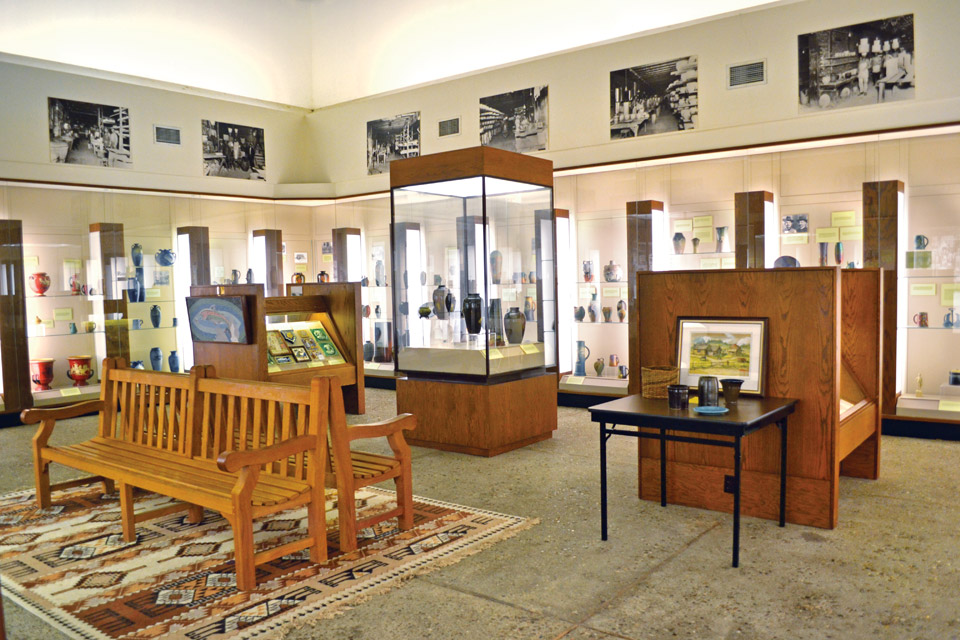 National Road–Zane Grey Museum
It may at first seem like an unusual combination, but the National Road–Zane Grey Museum tells the story of the region and one of its most famous sons. Start by exploring the history of the National Road. A 136-foot diorama winds throughout the museum, starting with miniature scenes of workers clearing woods to make way for the road during the 18th century and ending with a depiction of what driving the famous route was like during the mid-20th century. “I’ve never seen anything like it before,” says director of operations Debbie Allender. “It’s really intricate.” Zane Grey, the celebrated western novelist, grew up on the National Road in the late 1800s and his success is showcased via a replica of his study, filled with original books and movie posters from the films based on his stories. The museum also houses an exhibit dedicated to the local art pottery of the late 1800s and early 1900s. “This area is rich in the clay that was used for the pottery,” explains Allender. “And when they dug [The National Road, it] was more opportunity to go out and find clay to produce the pottery.” Wed.–Sun., May–October; 8850 E. Pike, Norwich 43767, 800/752-2602, ohiohistory.org

Ohio Statehouse
The roots of the Ohio Statehouse stretch back to an 1838 competition, which sought an architect to draw up designs for the capital building. When state legislators couldn’t decide which of the top three plans they liked best, architectural consultant Alexander Jackson Davis was hired to create a version featuring traits from each. With later expansions, the building now sits on a 10-acre city block in downtown Columbus. Tours allow visitors to get a closer look at the Greek Revival architecture of the building, with stops through the 128-foot-high grand rotunda and the Crypt, a combination of three galleries that now constitute an interactive museum. Ohio Statehouse communications and marketing manager Luke Stedke says his favorite part of the building is the legislative chambers. Visitors stopping in on Tuesdays and Wednesdays may even get a glimpse of their lawmakers in action. “This is where the people that represent us are speaking on our behalf and where the rubber meets the road,” Stedke says. “I like the history of it.” 1 Capitol Square, Columbus 43215, 614/728-2695, ohiostatehouse.org 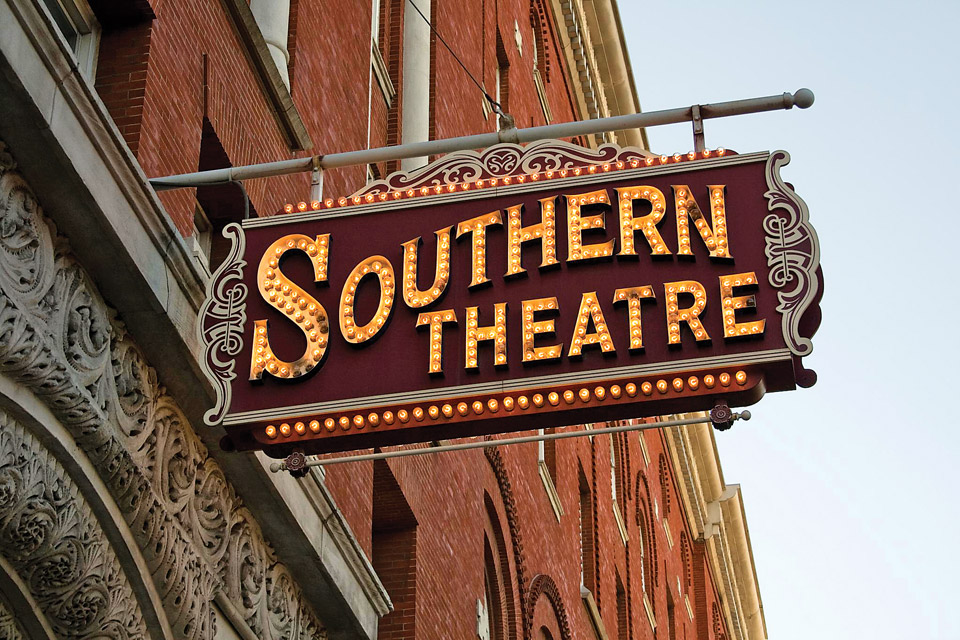 Southern Theatre
The oldest existing theater in Columbus still reflects its 118-year history, even after an extensive $10 million renovation in 1996. “It’s the only theater remaining in Columbus that has a double balcony to it,” explains Todd Bemis, vice president of theater operations. “You entered from a different entrance than the rest of the patrons … and it had benches versus theater seats. [Seating] most likely was segregated at that time when it was opened.” Other evidence of the theater’s long history can be spotted in the exposed-filament Edison bulbs in the light fixtures located throughout the theater. “The Southern was one of the first buildings in Columbus to have electricity,” says Bemis. “The invention of having electric light bulbs to replace the gas jets [that previously provided lighting] made it, to them, a fireproof theater.” Now home to the Columbus Jazz Orchestra and the ProMusica Chamber Orchestra, the theater remains a place where the performing arts thrive. 21 E. Main St., Columbus 43215, 614/340-1896, capa.com

The Westcott House
Architect Frank Lloyd Wright was known for designing structures in harmony with their outdoor environments. His Prairie-style home along the National Road in Springfield is distinctive for its low, horizontal lines, open floor plans and long bands of windows. But the 1908 property has a history that saw the landmark home, which was originally commissioned by automobile manufacturer and one-time mayor of Springfield Burton J. Westcott and his wife, Orpha, converted into apartments during the 1940s. A $5.3 million renovation during the 2000s restored the home to its former glory. Chemical testing was used to determine the residence’s original colors and re-creations of furniture designed by Wright were crafted based on drawings found in the architect’s archives. “It’s something that we could easily take for granted right now if people don’t have a good visual for how seriously bad the house looked,” says executive director and curator Marta Wojcik. Tours available Wed.–Sun.; 1340 E. High St., Springfield 45505, 937/327-9291, westcotthouse.org

Clark County Heritage Center
The Clark County Heritage Center showcases Midwestern agriculture, industry and settlement in its 23,000-square-foot exhibit space, with more than 5,000 square feet dedicated to the history of the nation’s first federally funded highway. The exhibit starts with a 1700s wall-sized map that includes handwritten notes from explorers. “The National Road Gallery is basically a step through time,” says Roger Sherrock, CEO of the Clark County Historical Society. He explains that the National Road contributed to the prosperity of Springfield because the town served as the route’s westernmost point for 20 years. “Settlers would get to Springfield and they really couldn’t go any farther,” Sherrock adds. “Springfield became a prominent frontier town fairly early in its history because of that.” Renovated in 2001 to house the museum, the Clark County Heritage Center building was home to Springfield’s government in the 1890s and functioned as a marketplace during the early part of the 20th century. 117 S. Fountain Ave., Springfield 45502, 937/324-0657, heritagecenter.us