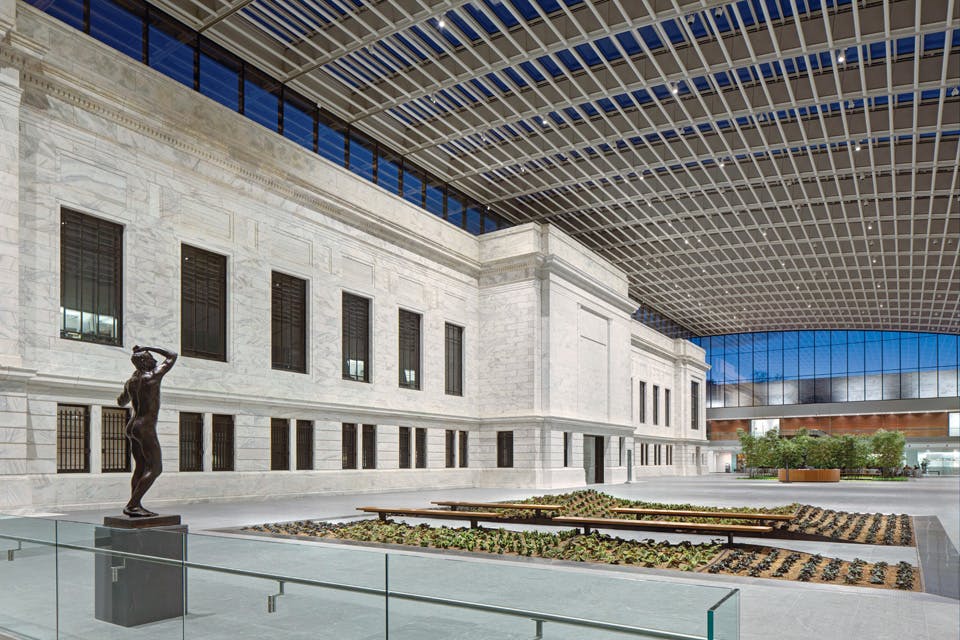 For eight years, the Cleveland Museum of Art underwent a metamorphosis that resulted in a new and fascinating place.

Chuck Close’s eight-and-a-half-foot tall, oil-on-canvas painting “Paul III” stares out through the sliding glass doors of Gallery One. The image on the canvas is as mysterious as it is inviting, beckoning visitors to come closer.

As they approach the portrait, the face depicted gradually dissolves into a mosaic of multicolored diamonds — the signature of Close’s painting style. It is a masterpiece that holds hundreds of tinier masterpieces within it.

On the other side of the rectangular column where “Paul III” hangs is “Statue of an Athlete,” a sculpture from Italy created between A.D. 1–200. The two works, separated by roughly 1,800 years of human history, are presented just feet away from each other. That juxtaposition is indicative of the sense of discovery evoked by the Cleveland Museum of Art’s massive $350 million expansion and renovation. The opening of the West Wing galleries on Jan. 1 marks the completion of the eight-year project.

“What’s unique about the Cleveland Museum of Art in the U.S. and maybe the world at this time is, this is the only comprehensive museum that you can visit where every single gallery, every piece of art has been reinstalled,” explains Fred Bidwell, the museum’s interim director. “There’s no museum like it today.”

The expansion and renovation not only revamped the landmark’s appearance, most noticeably with the addition of a 39,000-square-foot atrium at its center, but it has also reshaped the visitor experience. Gallery One is a clear indicator of the shift, displaying works by masters such as Pierre Auguste Renoir and Pablo Picasso near interactive kiosks that allow guests to delve into the inspiration behind the pieces. 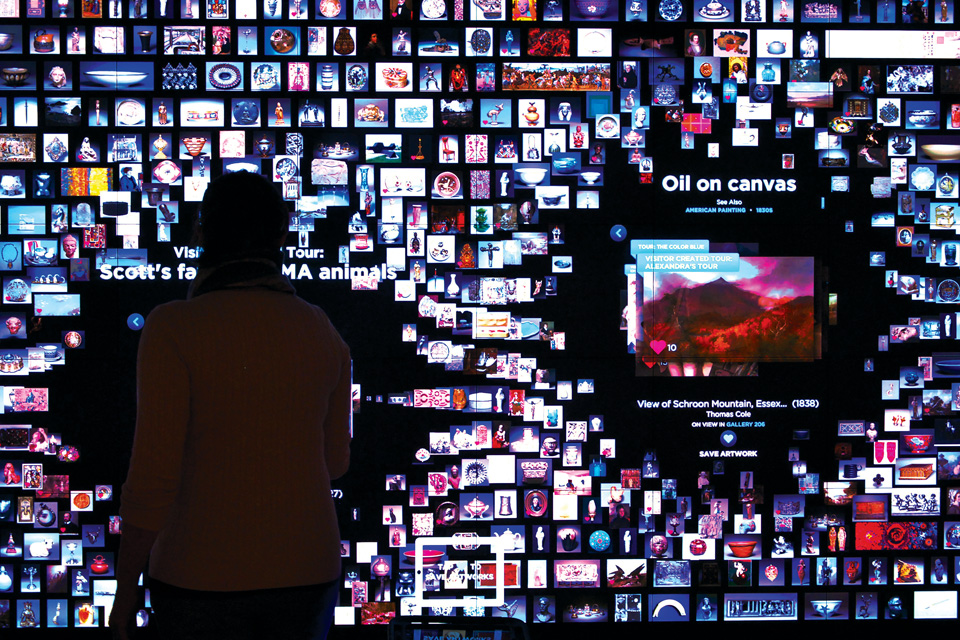 A 40-foot-long screen inside Gallery One lets visitors browse through pieces on view. (photo by Meghan Stockdale)

It’s here that visitors also encounter a 40-foot-long multi-touch screen that features a moving sea of images representing every piece on view in the museum. Guests can use the Collection Wall to create a custom iPad-powered tour, find related works or simply explore the parade of entrancing and beautiful art that passes before their eyes.

“Gallery One helps you understand the authentic object and makes you want to get close to it in a really interesting way,” Bidwell says. “It takes away the barriers and the mystery.”

Architect Rafael Viñoly has compared his design for the Cleveland Museum of Art to a diamond ring. The museum’s 1916 building is the gemstone at the top, while the East, West and North wings represent the band, with Viñoly’s grand atrium in the center. Because the museum charges no admission, the indoor space serves as a year-round public gathering spot.

Rolling patches of greenery and a stand of exotic trees sprout from the floor near benches at opposite ends of the atrium, creating an almost dreamlike feel. Provenance, a locally sourced and globally inspired fine dining restaurant operated by Cleveland restaurateur Douglas Katz, and Provenance Café, lie beyond the glass walls at the western end. Both offer seasonal menus with food inspired by the reach of the museum’s collection. 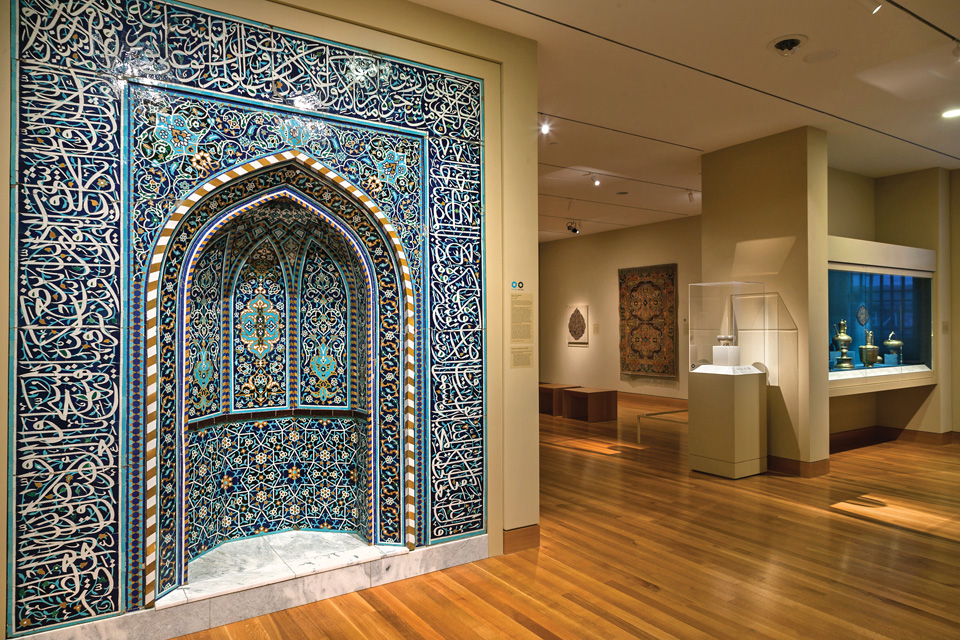 The 1916 building’s art spans the globe, including this beautifully detailed prayer niche from Iran. (photo by David Brichford)

Because the 1916 building offers works spanning the globe and reaches into antiquity it serves as a nice entry point for first-time museum visitors. As they enter the center hall from the atrium, they soon encounter a sandy-colored gallery to their left that houses ancient Egyptian art, while treasures of the early Italian Renaissance are displayed in a gallery to the right that is colored in a rich red hue.

“When I was brought on, the [museum] director at the time, Bob Bergman, and I shared this notion that you had to kind of amp up the atmosphere and give people visceral insight into the work,” Strean explains. “We’re surrounding the works with colors that are drawn from them. They’re colors from that period that show up in the paintings. … It’s a very theatrical presentation.”

Ask Bidwell about some of his favorites from the museum’s permanent collection, and he points to four pieces that, taken as a whole, show the range, depth and quality of pieces featured in the institution’s more than 130,000 square feet of gallery space.

One of them is by an artist many people may not have heard of before, Frederic Edwin Church. His “Twilight in the Wilderness” hangs in the American galleries in the 1916 building and depicts a vivid scene of an evening sky turning to night. “It’s a spectacular sunset almost painted with photographic realism, or maybe photographic surrealism, because it’s so spectacularly colored and hyper sharp,” Bidwell says. “You just can’t help but be drawn into it.”

Another is an image with which most people are familiar: Andy Warhol’s screen-printed depiction of actress Marilyn Monroe. However, seeing Warhol’s “Marilyn x 100” in person provides a different experience as the repeating images of the actress — 50 in color and 50 in black and white — stretch from one end to the other of the nearly 19-foot-long canvas. “It’s just so fun to look at,” Bidwell says. “It’s such an iconic piece of modern art — Andy Warhol laughing at and yet admiring the star quality of Marilyn.”

The two other pieces Bidwell identifies show the museum’s pedigree for displaying treasures of the ages. The first resides in a glass-walled gallery — one of two in the new design — at the south end of the West Wing: The detailed bronze “Nataraja, Shiva as the King of Dance” was made between the 10th and 13th centuries and depicts the Hindu deity circumscribed in a ring of fire.

The final piece Bidwell mentions is currently presented just off the atrium in a room called the Focus Gallery. The tucked-away space focuses on a single piece or theme as a way to provide guests a distinct and memorable experience with the art featured there. Outside distractions are minimized by the gallery’s design, but it’s also easily accessible from the atrium for visitors who would like to spend a moment with a masterpiece on their lunch break.

Picasso’s “La Vie” was presented there last year. In September, fourth century B.C. Athenian sculptor Praxiteles’ “Apollo the Python-Slayer,” which scholars believe was once housed at the Sanctuary of Apollo at Delphi in ancient Greece, was installed in the gallery. Stand before it, and it’s hard to say whether you’re more surprised the piece still exists at all or that you’ve been given the opportunity to spend a few moments of reflection alone with it.

“It’s probably one of the greatest examples of ancient sculpture you could see in any museum in any city in the world,” Bidwell says. “To be able to experience that and study it as a singular thing, it’s almost like being in a time machine.”