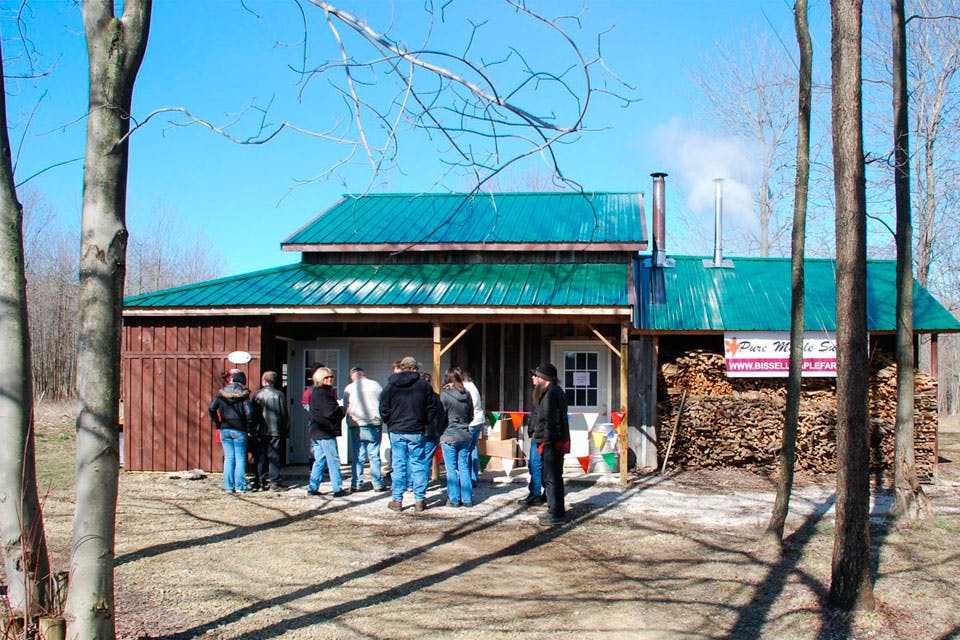 We visited three northeast Ohio maple sugaring operations you can see as part of the Maple Madness Driving Tour.


Ask a veteran maple syrup maker if sugar is added to his final product, or whether it’s organic, and you may notice him wince slightly. The good news is, you’re likely to get a polite answer: “Ma’am, it doesn’t get much more organic right from the tree to the jug. No sugar added.”

What many of us don’t realize — and what we rediscovered during winter visits to a trio of northeast Ohio maple sugaring operations — is even though we love to generously pour syrup over pancakes and gobble down maple candies, we also tend to take the sweet stuff native to our own backyard for granted.

The United States and Canada are the only two maple-producing countries in the world, primarily thanks to winters with temps below freezing at night and above freezing in the day, as well as forests filled with maple trees. Sugar maple (Acer saccharum) trees are the best sap producers, but black, red and silver maple trees can also be tapped.

According to the Ohio Department of Agriculture, we were fifth among 10 states in maple syrup production in 2013, producing around 155,000 gallons last year. The Ohio Maple Producers Association says at least 900 families are in the business. Some are now in their seventh generation.

Producers range from small hobbyists with just a few traditional taps to Amish farmers to larger commercial operations that embrace modern sugaring methods. We hit the road to visit three producers you can check out this month as part of the Maple Madness Driving Tour — a free, drive-it-yourself trek happening March 8, 9, 15 and 16. It features 48 tour stops throughout 22 Ohio counties, plus two across the border in Pennsylvania.

Learning how sugar maple trees are tapped and syrup is made doesn’t get much more convenient than a visit to Lake Metroparks Farmpark. The farm’s spacious sugarhouse is part classroom, part modern sugaring operation and part clubhouse. When the inside evaporator roars to full blast, it’s just about mittens-off temperature.

“Lake Metroparks Farmpark has been sugaring since 1997, but census records indicate the process occurred on the property in the 1850s,” says Farmpark administrator Andrew Baker.

Around 800 trees on the property provide the sap that’s boiled down into syrup by master sugar maker Don Barren.Posters on the wall explain the history of maple sugaring, and vintage equipment, such as an old wooden wringer once used to wash cloth sap filters, is displayed nearby. Because it takes at least 40 gallons of sap to make one gallon of syrup, 40 empty plastic milk jugs are exhibited to illustrate the point. 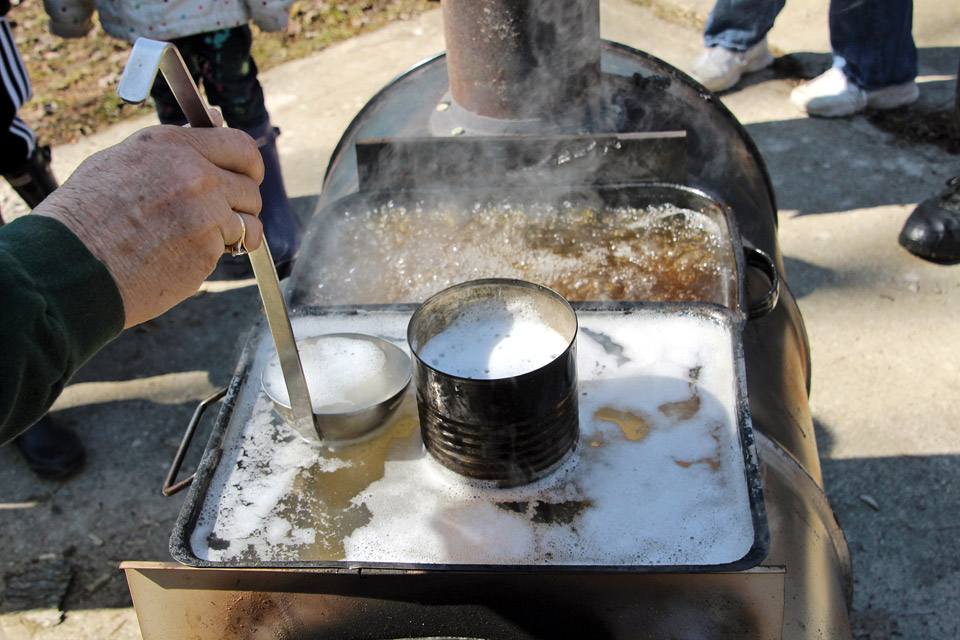 Visitors can choose a wheelchair-accessible path to view a nearby stand of trees or walk a ways to see a larger sugarbush. During Maple Sugaring Weekends — the first four weekends in March — kids try their hand at collecting sap the old-fashioned way. They drill holes in a log to insert taps and make a small birch-bark bucket similar to those Native Americans made to collect sap.

Farmpark events manager Andy McGovern says visitors can learn how to tap trees in their own backyards, or take part in the Adopt a Tap program. Ranging in cost from $25 to $150, higher-end contributions include the opportunity to jump aboard a horse-drawn wagon for a traditional maple-tapping experience.

“The Adopt a Tap program is very popular with families who really get into the entire sugaring process in a more personal way,” McGovern says. 8800 Euclid Chardon Rd., Kirtland 44094, 440/256-2111, lakemetroparks.com

Nathan Bissell knows exactly when sap enters his sugarhouse via tubing at his maple farm. He’s alerted via an email or text message on his cell phone. “My sugarhouse talks to me,” says Bissell, a member of an Ashtabula County family that has been producing maple syrup for more than 100 years.

He says this is the future of maple syrup production in our state. A  chemical engineer with an additional business degree, Bissell hopes to vault his family farm and the future of all Ohio maple producers to the top of the country’s maple production.

The farm is open March 8 and 15 during the Maple Madness Driving Tour, as well as a March 1 sneak peek. Visitors take horse-drawn shuttles to the comfortable, lodgelike sugarhouse to see the reverse osmosis machine that extracts 75 percent of the water from the sap, a state-of-the-art evaporator and the bottling process and syrup storage for 10,000 gallons. Thirty trees are still tapped for buckets because, Bissell says, “it is nostalgic” and “regardless of technology advancements, there is still nothing better than the sight of a full bucket of sap.”

Free pancake breakfasts will be served March 1, 8 and 15, and groups of 10 to 15 people can participate in guided tours of the sugarbush.

“I didn’t always embrace the family business,” confesses Bissell, whose enormous syrup tanker truck is cleverly nicknamed Sapsquatch. “But now it’s an addiction. There are infinite possibilities with maple syrup. You can always increase production and try new and different products. I want my sons, 7, 5 and 1, to be part of this someday.” 3741 Higley Rd., Rock Creek 44084, 440/563-3263, bissellmaplefarm.com 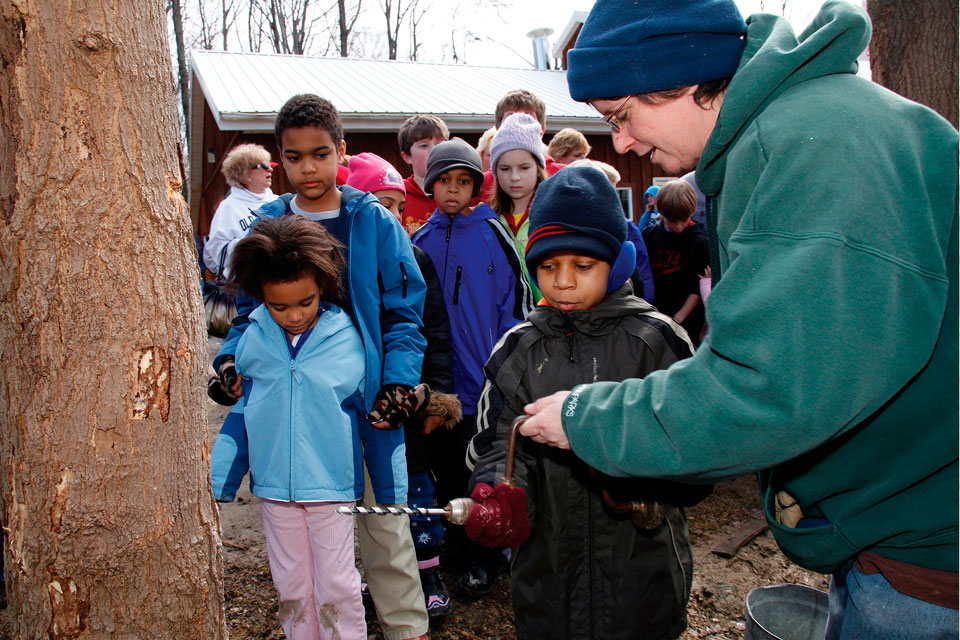 The K-C Maple Syrup sugarhouse in Montville Township looks like something you’d find in a child’s book of fairy tales. The interior of the 12-by-20-foot wooden building built in 1994 by owner Carl DeFilippo and his brother-in-law has knotty pine paneling with tree-bark door trim and a wood burner in the corner that’s finished in stone. A “secret” door in the back wall leads to a stack of wood outside used to feed the evaporator that can boil 60 to 70 gallons of raw sap into syrup each hour.

Fifteen small jars of maple syrup samples line one windowsill, catching sunlight that shows off their color variations. Ribbons on the wall document the sugaring operation’s success, while framed photos map its progression. One 1988 photo shows a circle of red bricks around a campfire, two cooking pots and a lawn chair — K-C’s humble beginning.

“My neighbor got me started,” says DeFilippo, a machinist and scheduler for Bowden Manufacturing in Willoughby. “He was doing it, and I just got hooked.”

DeFilippo and his wife, Karen, have been part of every Maple Madness Driving Tour since it began in 2001, and their production of maple syrup has increased annually. This year, the couple’s 8-acre Geauga County property is dotted with 350 tree taps — 300 with the modern tubing that delivers sap to the sugarhouse and 50 others with traditional galvanized metal buckets.

K-C Maple Sugar will be open during the Maple Madness Driving Tour on March 8 and 9. DeFilippo will lead visitors through the sugarbush where the trees grow, while Karen will slow boil the syrup in the sugarhouse.

Maybe you’ve never given much thought to real maple syrup. This month, 48 Ohio operations, ranging from small sugarhouses to large commercial businesses will welcome visitors during the Maple Madness Driving Tour, March 8, 9, 15 and 16. (Check the list of locations and hours at ohiomaple.org.) You can also learn about maple sugaring or just enjoy the finished product at one of these festivals and special events.