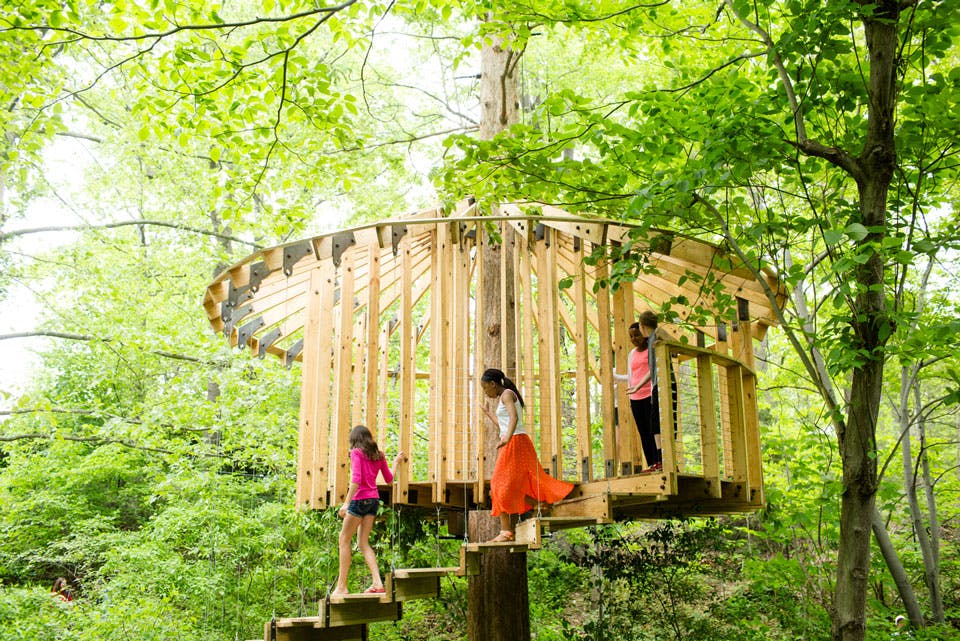 Check out creative treehouses at the Cleveland Botanical Garden and new music at Rock & Roll Hall of Fame.

Back to the Beach

Last summer, the Cleveland Metroparks provided thousands of northeast Ohioans a jump-start on their weekend with Edgewater Live. The free Thursday evening gatherings at Edgewater Beach return again with a mix of food trucks, live music and plenty of sunshine.

The event was a success in re-energizing people’s interest in the public beach just west of downtown, and it was joined by a free Friday evening event along the eastern shore called Euclid Beach Live — held on the site of a long-gone-but-beloved amusement park that operated from 1895 to 1969.

To celebrate its 20th anniversary, the Rock and Roll Hall of Fame and Museum is hosting a yearlong concert series featuring up-and-coming touring artists on the museum’s main stage or outdoor plaza when weather permits.

Elle King, a musician who spans country, rock, soul and blues, performed at the concert series’ June 5 installment, while the Danish rock band New Politics is set to take the stage July 21.

“We curate these shows and select bands that we feel are particularly exciting and that will be very well received by a broader audience,” explains Rock and Roll Hall of Fame and Museum president and CEO Greg Harris.

Since opening in 1995, the I.M. Pei-designed Cleveland landmark has welcomed 10 million visitors, and Harris says the Rock Hall’s anniversary speaks a great deal about the strength of the museum and those who support it.

“[The museum] resonates with people,” he explains. “It’s maintained its relevance and shows people care about the Rock and Roll Hall of Fame.” Visit website for musician lineup and dates. 1100 Rock and Roll Blvd., 216/ 781-7625, rockhall.com

The Cleveland Botanical Garden turns its attention to a childhood favorite this season with “Branch Out,” an installation of five treehouses designed by local architects.

Each creator was given a theme, with the goal of inspiring kids to learn about art, music, reading and math. “The subject of trees kind of evolved into something bigger, which is encouraging nature play and the treehouse being an icon of childhood,” explains Jen Anderson, director of guest services and special exhibits.

The outdoor exhibit, which runs through Aug. 23, aims to inspire kids to detach from technology and let their imaginations run wild as they explore the creatively crafted treehouses. They’ll uncover fun facts hidden throughout the grounds and learn about the value and benefits of trees.

This summer also brings the return of Gourmets in the Garden. The popular 13-week series features some of the region’s top chefs offering cooking demonstrations at the botanical garden. Guests learn to make gourmet dishes and sample the featured meal before exploring the grounds.

“This year, we asked our chefs to feature a tree ingredient to keep with our theme for ‘Branch Out,’ ” says Anderson. Visit website for hours, ticket information and Gourmets in the Garden lineup and dates. 11030 East Blvd., 216/721-1600, cbgarden.org


Thrill Seeking
Explore the treetops of Cleveland Metroparks’ Mill Stream Run Reservation by tackling the Go Ape adventure course. The five zip lines and 42 obstacles have visitors scaling ropes and crossing bridges as they travel through the canopy.

“We’ve got all sorts of crossings to get you from one tree to the next,” explains Go Ape U.S. managing director Dan D’Agostino, adding that the course offers rope ladders, tunnels, trapezes and two Tarzan swings. “You attach into a special harness and you basically swing through the air … [and land in] a big cargo net.”

After a 30-minute safety and training demonstration on the ground, you’re ready to get started on the two-hour-plus experience. The course is the first of its kind in the Cleveland area and serves as Maryland-based Go Ape’s first foray into Ohio (the company has 12 other courses throughout the country).

Four of the zip lines at the Mill Stream Run Reservation carry visitors over wetlands, providing the opportunity to take in aerial views of the more preserved parts of the park. Visit website for reservations. 16200 Valley Pkwy., Strongsville 44136, 800/971-8271, goape.com

Cleveland is packed with rich history and beautiful architecture, and the Nautica Queen offers a way to get a fresh look at both. Excursions down the Cuyahoga River and out onto Lake Erie treat passengers to a meal served alongside spectacular views and recorded narration that discusses sights along the way.

“The focus is all about seeing the city from the water’s perspective and seeing things from a different vantage point,” explains port captain Jim Dale.
Check out the spot where Moses Cleaveland first landed near the mouth of the Cuyahoga River, cruise beneath historic jackknife bridges that were vital to the city’s industrial past and take in the city skyline.

Along with the guided tour of the Cleveland lakefront, the Nautica Queen offers an array of themed cruises throughout the summer. These twists on the typical sightseeing excursion range from sunset wine tastings to nostalgic trips packed with music from the ’50s, ’60s and ’70s.

Built in 1981 and launched as the Nautica Queen in 1992, the ship has been updated throughout the years, most recently with a new interior that has included changes to the paintings and the buffet presentations.

“We try every year to expand or do better at what we do,” says Dale. Visit website for excursion information, pricing and reservations. 1153 Main Ave., 216/696-8888, nauticaqueen.com