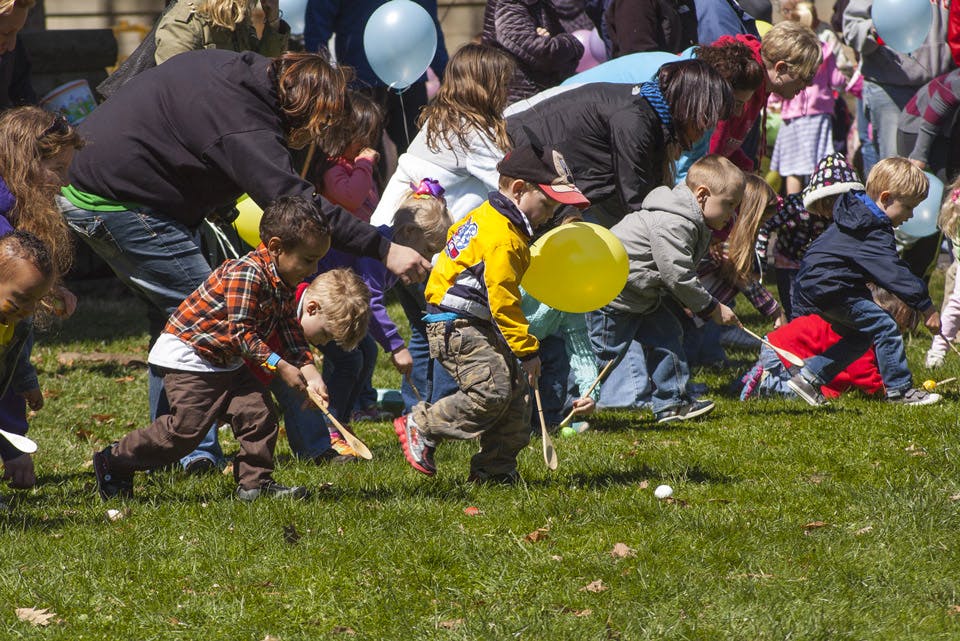 The annual White House Easter Egg Roll dates back to Ohioan Rutherford B. Hayes’ time in office. The tradition lives on in Fremont.

In the days before Secret Service protection and armed motorcades, the President of the United States was accessible on the streets of Washington D.C. Such was the case when Ohio native Rutherford B. Hayes held the nation’s highest office.

One morning, he was stopped by a child with a simple albeit unusual request. “He was out in his carriage and a kid approached him,” explains Christie Weininger, director of the Rutherford B. Hayes Presidential Center.

In 1876, Congress had passed a law banning the use of the Capitol lawn as a playground. Lawmakers argued there was no budget for landscaping and maintenance, but the move effectively killed off the annual Easter egg roll, which had been held there since the end of the Civil War. The child asked if the president would host the event at the White House, and he said yes.

Ever since Rutherford B. Hayes first welcomed kids to the White House in 1878, the president and first lady have annually invited thousands of children and their parents to visit the grounds on the Monday after Easter. There are story times and other activities, but the main event remains unchanged: Children use wooden spoons to roll Easter eggs across the White House lawn.

The Rutherford B. Hayes Presidential Center in Fremont, where the Hayes’ former family home is located, has been hosting its own Easter egg roll on the Saturday before the holiday since 1986 as a way to pay tribute to Hayes’ role in creating the White House tradition. Unlike the Washington D.C. roll, which distributes tickets by way of lottery, all children who show up on the grounds of the Hayes Center are welcome to participate. The price of admission is just three hard-boiled and colored eggs.

Although Hayes doesn’t get much praise for his presidential legacy, which was defined by civil service reform and the end of Reconstruction following the Civil War, the northwest Ohio center that bears his name was the first of its kind — a template for what presidents after Hayes would create to commemorate their own time in office, says Weininger. “The modern tradition of what we know as presidential libraries today started in Fremont.”

When Hayes left the White House in 1881, the post-presidency was much different than it is now. There was no pension for serving as president, and any presidential papers were property of the man, not the government.

Hayes’ predecessor, Ulysses S. Grant, was broke and fighting cancer. He had to write his memoirs to ensure his family’s financial health after his time in office. Hayes, on the other hand, was able to retire in relative security following his single term thanks to family money and a military pension. He returned to his home in Fremont, which is named Spiegel Grove due to the reflective puddles of rain that form on the grounds (Spiegel is the German word for “mirror”).

Hayes’ maternal uncle, Sardis Birchard, had purchased the 25-acre property in 1849 and started construction on the home in 1859 with the plan that it would be the family estate. Birchard had been a surrogate father and legal guardian to Hayes, whose own father and namesake had died just before the future president’s birth. Birchard, a successful merchant in northwest Ohio, funded his nephew’s education at Kenyon College and later Harvard Law. 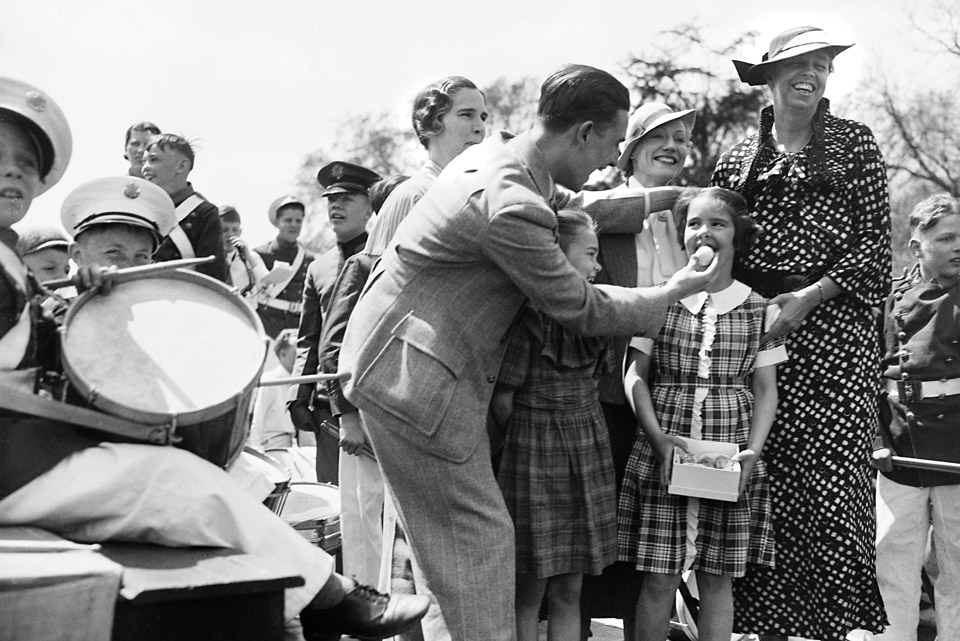 Kids and parents have fun at the White House Easter Egg Roll during the 1920s. The tradition dates back to Ohioan Rutherford B. Hayes’ time in office. (photo courtesy of Library of Congress)

Following college, Hayes went on to serve in the Civil War, rising to the rank of brevet major general, and he was elected to Congress while still in the Army before serving two terms as governor of Ohio. He didn’t live in the family home for the first time until 1873, a few years before he was elected president.

By the time Hayes and his wife, Lucy, returned to Fremont in 1881 following his decision not to seek re-election, the family had built an addition to the home, including a library, parlor and three bedrooms (with a bathroom off the master bedroom — revolutionary for the time). Another addition in 1889 doubled the residence’s size to 31 rooms.

“They knew they were going to be hosting a lot of dignitaries in his post-presidency and they were hoping for lots of grandchildren,” Weininger says. “They wanted a lot of company.”

It also wasn’t uncommon for people to just show up for an opportunity to meet the president.

During those years, Hayes continued to advocate for education. While governor, he was instrumental in the formation of the Ohio Agricultural and Mechanical College. After his time in office, he was offered the presidency of the school, which had been renamed Ohio State University. He turned it down, but served on the school’s board of trustees.

Lucy died in 1889, and Hayes followed her in death four years later. Both are buried on the Spiegel Grove grounds, along with Old Whitey, Hayes’ horse during the Civil War.

Kids gather each Saturday before Easter outside the restored estate Rutherford B. Hayes and his wife, Lucy, once called home.

In 1912, the Hayes’ five children, led by their son Webb, deeded the Spiegel Grove property to the state and gave the family’s possessions and papers to the Ohio Historical Society with the idea of creating a museum.

“[Webb] wanted it to be a tribute to his parents, but there was also such a strong educational element to it,” Weininger says. “He wanted his father’s papers accessible to the public in the place where he lived. If people were really going to understand the presidency as an institution and his father, they needed to do it in [that] context.”

Then called the Rutherford B. Hayes Memorial, the first presidential library in the United States opened on May 30, 1916. Announcements said “the doors would be thrown open to the schoolchildren of Fremont.” For nearly three decades, it was the only presidential center in the country, and it remains the only one to operate without any federal funding or oversight.

But over the years, the Hayes home changed, with updated decor and some room revisions. When design historian Gail Caskey Winkler first saw the house in 2007, she found a home that was built in the 19th century, but decorated like a 1940s-era house, with wallpaper added and rooms changed around. Hayes’ bathroom off the master suite, which he referred to as his “inner sanctum,” had become a dressing room. Winkler served as a consultant for the home’s $1.5 million restoration to bring it back to how it looked when the Hayes family lived there after leaving the White House.

“It was a big project, but we were so lucky because President Hayes didn’t throw anything away,” Weininger says. “We had receipts from when furniture was ordered or reupholstered or when wallpaper was ordered. They left us a lot of clues.”

Winkler says cabinets from the inner sanctum were found in the home’s basement. And because it was a president’s home, the residence was documented photographically as well.

“I can probably count on one hand the number of houses or historic structures I’ve found with that kind of documentation,”  Winkler says. “With that documentation, I could create it not as I saw it, but as President and Mrs. Hayes saw it.”

The house itself also provided clues. Restorations uncovered ghost marks of the 1880s wallpaper on the plaster.

“In some instances, we found scraps of the wallpaper behind the woodwork,” Weininger adds. “It’s an incredibly accurate restoration. We feel like if Rutherford and Lucy came back through the doors they would recognize it as their own.”

The project, which was completed in 2012, also restored Hayes’ library — home at one point to more than 12,000 volumes — as well as his inner sanctum.

Plans are being made for the Hayes Presidential Center’s centennial in 2016, with a host of activities scheduled around Memorial Day weekend. Of course, two months before that grand celebration, kids and adults will once again gather to roll Easter eggs, as they have each spring for nearly 30 years.

These days, Weininger says, those who first took part as kids are bringing their own children to experience Spiegel Grove’s spring tradition. “It’s passing on to another generation.”

For details about times, reservations and what you need to take part in the 2022 Hayes Easter Egg Roll visit the website or Facebook event.