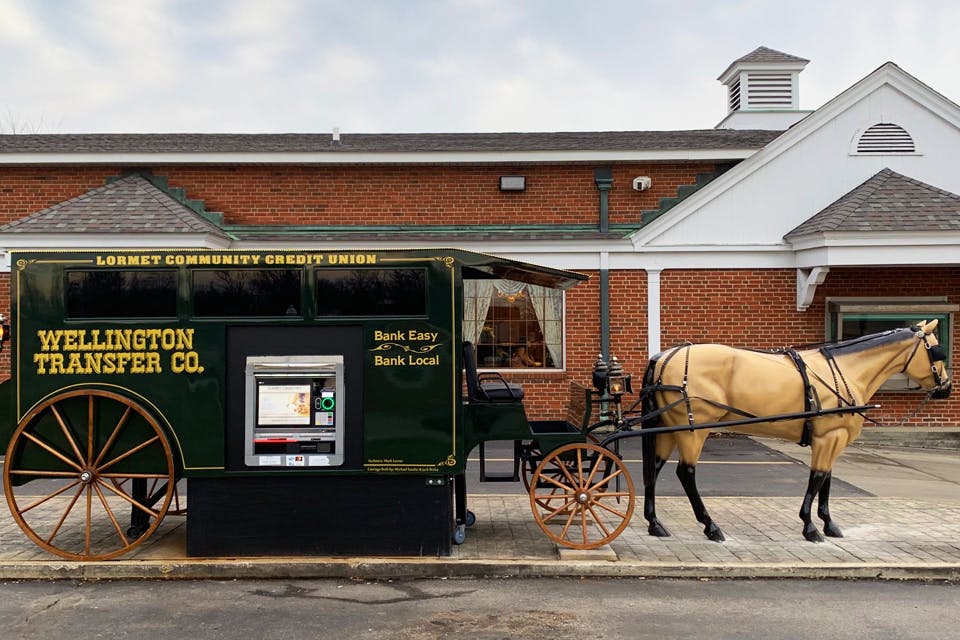 This roadside attraction is unusual for an ATM yet feels right at home in Ohio.

Just past the intersection of Main Street and East Herrick Avenue in Wellington, a brown horse hitched to a buggy appears as if it’s waiting for a signal to trot. Instead, it distributes cash all day long as one of the most unusual ATMs you’re likely to encounter.

“It was kind of a joke at first,” says Daniel Cwalina, president of the LorMet Community Federal Credit Union, where the horse-and-buggy ATM is located.

The idea came about during a casual chat at a business conference 15 years ago, but when Cwalina and his co-workers did some research, they realized that a horse-and-buggy ATM might actually have a place at the branch.

“I have a passion about our history, and we thought, this is going to be really neat,” he says.
Although the Victorian-style horse and buggy serves as a tribute to the southwest Lorain County town’s roots, Cwalina didn’t necessarily expect the ATM to become such an icon.

In fact, he went through a period during which he considered putting the horse and buggy to pasture in favor of a more traditional-looking cash machine, but Cwalina quashed that thought based on something he witnessed during his commute into work one day.

“I drove by one morning, going into the main office, and I looked to my right,” he recalls. “There was a woman who put her child up there and was taking a picture. And I just thought to myself, It’s got to stay.”

This year, Cwalina began working on renovation plans for the sculpture. The proposal includes a total remake, with extra consideration for weatherproof building materials and an eye for fine details that he hopes will help the ATM remain a local landmark for years to come.

“It complements the community,” Cwalina says. ”I’m very proud of it. It’s something that we are going to reinvest in.”