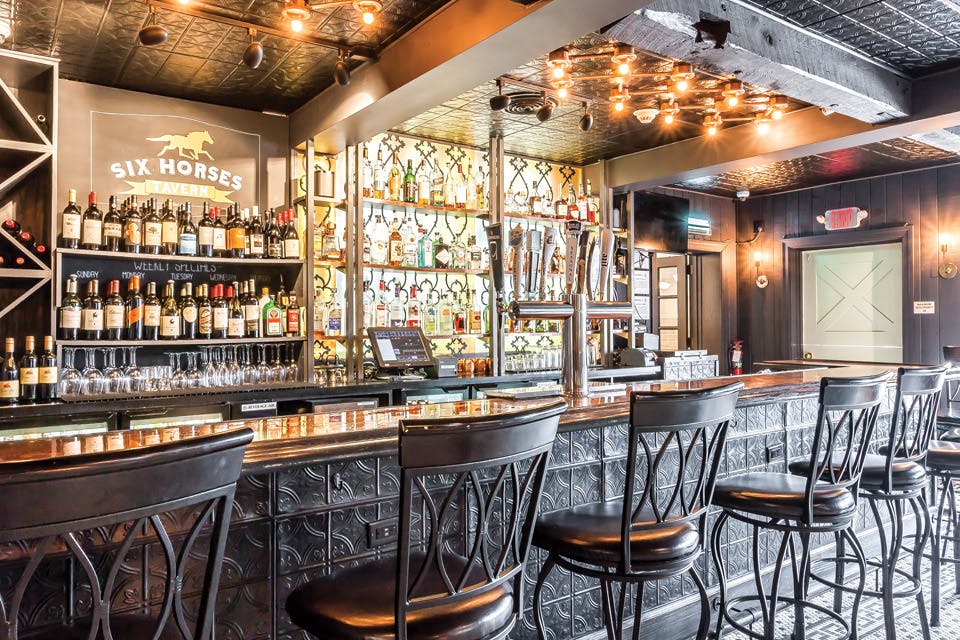 This northeast Ohio landmark was shuttered before its new owners teamed with HGTV’s Genevieve Gorder to create a modern hotel that honors its 90-year history.

The Six Horses Tavern has a dark brown tin ceiling and tile floors that give it a distinct 1920s feel. Just beyond the classic sheen, one notices the modern touches: hidden purse hooks and outlets for phone chargers. Over the years, entertainers such as Dean Martin and Rosemary Clooney stopped in at one time or another. Now, you can too, to raise a glass to the Aurora Inn’s new look for its 90th anniversary.

“The architectural integrity of what was originally designed had really been changed,” says Stephen Mansfield, proprietor of the Aurora Inn Hotel & Event Center. “This hotel was built in a classic Western Reserve style and none of that shined through when we bought it.”

In 2014, Mansfield and his business partners purchased the inn and began restoring the property. After undergoing a three-year renovation led by interior designer and HGTV personality Genevieve Gorder, the 66-room hotel unveiled its new look last month.

Gorder was brought in to give the inn a fresh, contemporary feel, while incorporating local history. One black and white photo hanging on the wall captures local cheese barons Frank Hurd and W.J. Eldridge dressed in 1880s high fashion. Another shows President Richard Nixon receiving the key to the city in 1972.

In the lobby, guests check in at a large desk built using salvaged beams from the inn. The original red brick floor was brought back to life after spending years hidden, and renovators uncovered a large brick fireplace that now serves as the room’s focal point.

The art deco chandeliers in the ballroom are one of Mansfield’s favorite features. They are also one of the few original elements of the 1927 inn that remains today following a 1963 fire.

“When we took over the hotel, they were up there, but they had been caked with decades worth of dust and dirt,” Mansfield says of the chandeliers. So, he got on a scaffold and spent about a week taking out every piece of glass to clean and polish it.

“[The inn] has created memories for 90 years,” he says. “I am really excited to take what was a closed, poorly managed, poorly run ugly building and bring it back to what I think is just a gorgeous current life.”