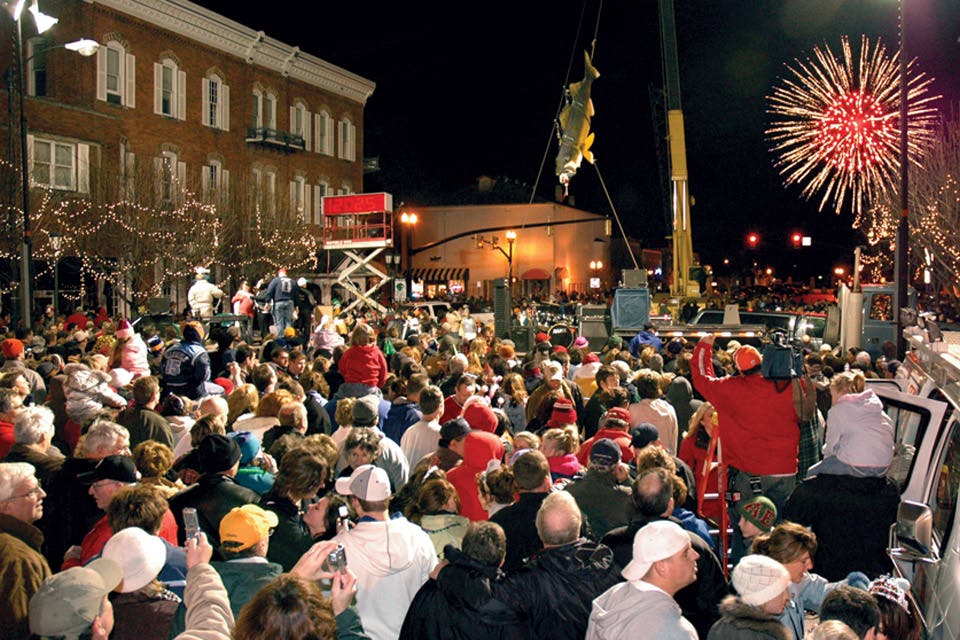 From a giant popcorn ball to a 600-pound walleye, here's how three Ohio towns ring in the new year.

If the idea of ringing in the New Year on a chilly night in Times Square isn’t your style, check out these three towns that hold their own version of New York City’s famous ball drop. From an 18-foot sausage to a 600-pound walleye, these small-town celebrations are sure to make for a memorable New Year’s Eve.

Walleye Drop | Port Clinton
The lakeshore town of Port Clinton marks the arrival of the New Year by dropping a 20-foot, fiberglass walleye weighing 600 pounds. The free event reflects the influence that the fish has on the town known as the walleye capital of the world. Restaurants pitch in by making walleye popcorn, chowder and sandwiches. The local Mon Ami restaurant and winery creates Walleye White, a white table wine, to mark the occasion. “It’s not a huge, big party that is overwhelming,” says event chair Lauren Schubach. “It’s really much more about the community and having fun that evening.” For more information about the celebration or to watch a live webcam of the Walleye Drop on New Year’s Eve, go to walleyemadness.com.

Pop-N-Drop | Marion
The town of Marion has been counting down to the New Year with the help of a giant illuminated popcorn ball since 2008. Marion’s ties to the snack food date back to World War I, when it was served to soldiers passing through town. Then, during the Great Depression, Warren Hoover Brown founded the Wyandot Popcorn Co. “When he decided to have a production factory, he decided to come to Marion because it had the workforce he needed and the train system was here,” says Gale Martin, executive director of the Wyandot Popcorn Museum, which features 56 antique popcorn poppers and peanut roasters. For more information, go to downtownmarion.com.

Sausage Drop | Elmore
Billed as the “wurst” event of the season, the northwest Ohio village of Elmore’s Sausage Drop happens just once every five years. Tank’s Meats, an Elmore institution since 1907, sponsors the celebration, which concludes with an illuminated, 18-foot sausage drop at midnight. The evening also includes a dog costume contest, a sausage-eating contest and a sausage-throwing contest. “We are always there for them, and they have always been there for us,” Tank’s Meats co-owner Eric Amstutz says of the relationship between the company and the community. “So, we like to give back.” For more information, go to villageofelmoreohio.com.