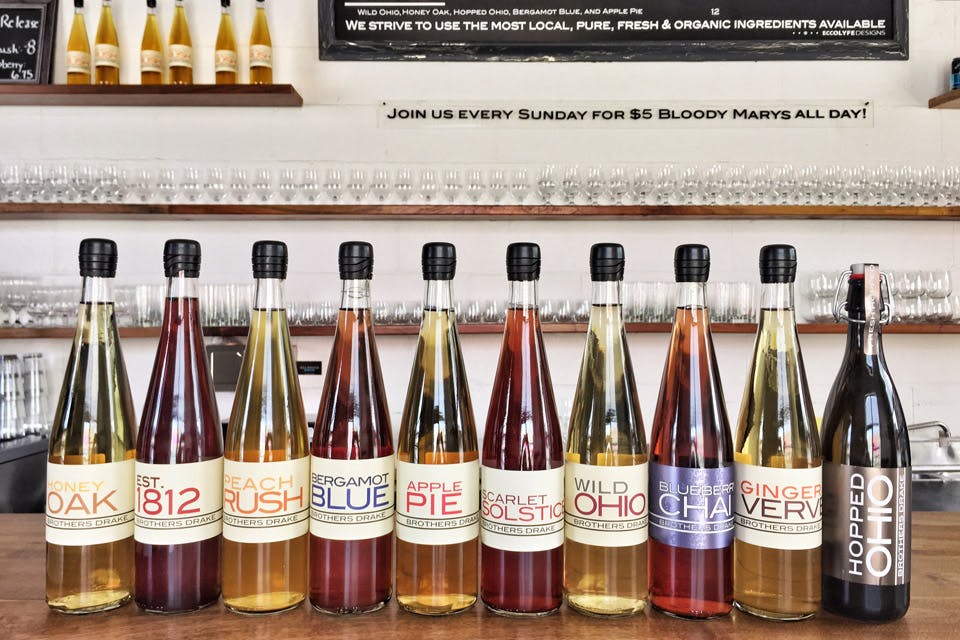 Check out these treats, spirits, beauty products and original designs that hail from our capital city.

MEAD: Brothers Drake Meadery
Mead is having a moment, and Brothers Drake Meadery does it better than most. Its sulfite-free honey wine is aged for more than a year and is made with local and organic products whenever possible. Take a $15 tasting tour and sample the Apple Pie mead, made from Ohio wildflower honey, apple cider, cinnamon, nutmeg and cloves. Besides the eight to 15 flavors of mead always on tap, Brothers Drake offers Ohio-made spirits and beer and Japanese comfort food (think dumplings and ramen). Add live music to the mix, and you can see why Brothers Drake, which opened in 2008, is always packed. As mead becomes more popular, co-owner Sarah Benary says it provides a good forum for education when it comes to saving honeybee populations. “The more interest in mead there is, we hope the more interest people will take in protecting our pollinators.” 26 E. Fifth Ave., Columbus 43201, 614/388-8765, brothersdrake.com

MACARONS: Pistacia Vera
Spencer Budros tasted his first macaron two decades ago at Zurich’s famous Sprüngli pastry shop. “I just fell in love with it,” he says. So when he and his sister, Anne Fletcher, opened Pistacia Vera in 2004, it was a given that macarons would be on the menu. These days, they sell nearly a million a year, in 12 flavors, as well as quiches, croissants, eclairs, tarts, tortes and more. Budros, a pastry chef, spent 12 years working in Scottsdale, Arizona, before opening Pistacia Vera. Fletcher, a financial planner, had been living in Virginia. “Both of us were starting our families and wanted to [raise] our kids … back in Columbus,” Budros says. “We’re a good team.” 541 S. Third St., Columbus 43215, 614/220-9070, pistaciavera.com

LOCAL SPIRITS: Watershed Distillery
When Greg Lehman and Dave Rigo’s wives introduced the men to each other, they hit it off immediately and began talking about going into business together. “The distillery was one of those ideas that wouldn’t go away,” Rigo says. “No one was making local spirits yet.” Watershed Distillery opened in 2010 with two products: vodka and Four Peel Gin. Today, Watershed sells six locally sourced spirits, including bourbon, which sells out every month. (They’re in the process of adding a second still to increase production capacity.) Visitors can check out the distillery with a $10 tour that is offered Thursdays, Fridays and one Saturday each month. 1145 Chesapeake Ave., Columbus 43212, 614/357-1936, watersheddistillery.com

HIGH-END WOMEN’S FASHION: Malvar = Stewart
Celeste Malvar-Stewart’s high-end designs for women typically begin in the forest or on the farm. She uses raw wool from Ohio Lincoln Longwool sheep, and she forages in the woods for the black walnuts and plants she uses to dye her fabric. She launched her couture label, Malvar=Stewart, in 2010 and is known for her gowns with fitted bodices that flow into swirls of brightly colored silk. A New York City transplant, Malvar-Stewart says she was initially shocked both by how vibrant Columbus is and by the spirit of its residents. “One of the things that I really enjoy about Columbus is that people will collaborate,” she says. 391 E. Livingston Ave., Columbus 43215, 614/370-1127, malvarstewart.com

SWEET & SAVORY TREATS: Fox in the Snow Cafe
Lauren Culley and her then-boyfriend-now-husband, Jeff Excell, were happily living in Brooklyn, New York, when Culley returned to her native Columbus for a visit. “She was struck by how much the city had changed since she’d left,” says Excell. “She came home excited about what we might be able to accomplish and contribute.” The result was Fox in the Snow Cafe, which opened in 2014 in Columbus’ Italian Village neighborhood. The shop’s sweet and savory treats include cinnamon rolls, sticky buns, scones, custard doughnuts (an oft-repeated request of the electrician who worked on their building), muffins and tarts. But the most popular item — they sell about 250 a day — is the egg sandwich, a souffled egg topped with candied bacon, arugula, Swiss cheese and a Dijon cream sauce and served on a ciabatta bun. “It was a runaway hit,” Excell says. 1031 N. Fourth St., Columbus 43201, foxinthesnow.com

AMERICANA-INSPIRED CLOTHES: Team Chipmunk
Team Chipmunk began more or less by accident. After 15 years working as a costume designer in New York and Los Angeles, Elizabeth Bourgeois and her husband researched a slew of cities before choosing Columbus as the place to raise their children. The plan was to take time off, but the Americana-inspired clothing Bourgeois made out of vintage fabrics for her daughter and son got noticed — everywhere. So she created a WordPress website in 2010 and within six months was receiving wholesale orders. The only problem was Bourgeois had no idea how to price or manufacture clothing. “I got some books from the library,” she says, “and learned as fast as I could.” Her creations include cotton A-line reversible dresses with a Midwest map print, darling graphic T-shirts, gingham shortalls for little boys and even a few dresses and skirts for women. Online orders only, teamchipmunk.com

CUSTOM SUITS: Jones Select
Gary J. Jones has a simple philosophy: A good suit has to fit both your body and your brand. “I think the most important thing is the client’s personality,” he says. He opened his Jones Select custom suit studio in Columbus in 2009. Since then, he’s outfitted athletes, CEOs and regular guys looking for an extraordinary suit. He takes 40 measurements to ensure a perfect fit but says that numbers don’t tell the whole story. He cites the example of NFL player-turned-pro boxer Ray Edwards. “He can wear something that’s a little trimmer, but if I made it trim, like the trend, he would be uncomfortable.” Jones Select suits start at about $1,000, and Jones’ studio is open by appointment only. 451 E. Mound St., Columbus 43215, 614/638-3600, jonesselect.com

NAIL POLISH: James Robert John
Rachel Worley loves nail polish — so much so that she devoted a year of her life to developing her own line named after her son, James Robert John. She also loves nail polish enough to believe that entering a market dominated by the likes of Revlon and OPI was a good idea. “I was very driven to do this,” she says of her 2013 launch. “Sometimes I look back on the beginning — the notes, my ideas, the questions I needed answers to — and I can’t imagine ever doing it again.” Worley’s polish is vegan and made without five chemicals commonly found in other polish, including formaldehyde. It sells for $14 a bottle and comes in 32 shades with names like “The One” (a blush pink), “Taking a Tech Break” (an earthy green) and “Love is Everything” (a subdued fuchsia that is Worley’s favorite).  James Robert John is sold at several Columbus-area boutiques and can be purchased online. jamesrobertjohn.com