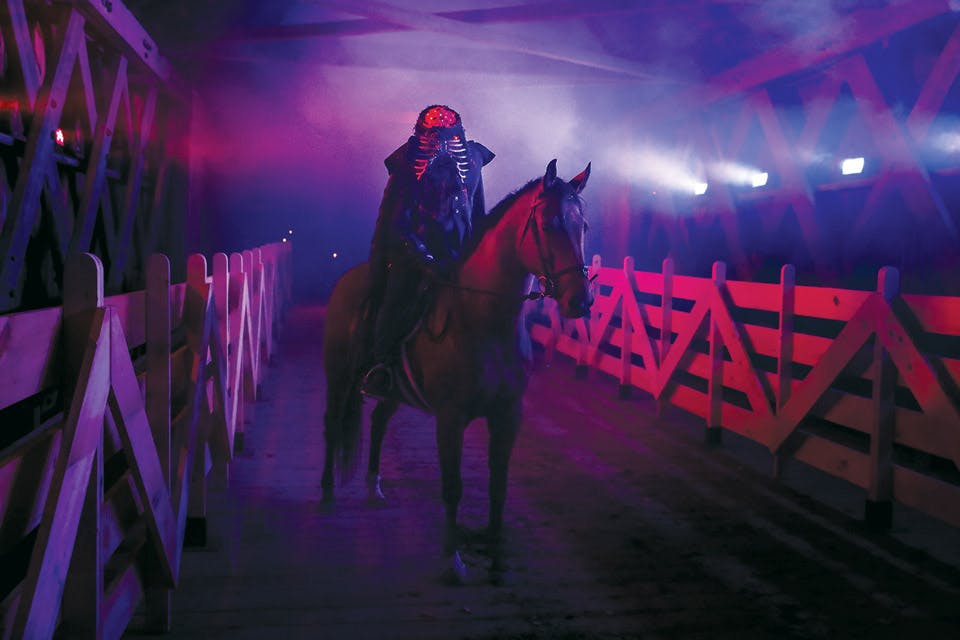 Boo at the Zoo, Powell

When it comes to hosting a Halloween bash, the Columbus Zoo and Aquarium follows a family-friendly philosophy that draws more than 90,000 people to Boo at the Zoo during the two weekends it takes place.

“We believe the holiday should be fun not frightening,” says Alec McWilliams, the zoo's experiential logistics coordinator. “Our goal is to present lots of aspects of Halloween that go beyond the scary stuff.”

Although geared toward the 6-to-10-year-old crowd, Boo at the Zoo features attractions for everyone. This year, Spider-Man, Captain America, Black Widow and Casper the Friendly Ghost will be on hand for meet-and-greets, as will a menagerie of the zoo’s residents, including polar bears and elephants. Hayrides, pumpkin-carving demonstrations and candy stops add to the festivities.

“This is one of my favorite times here because it’s fun to walk around and see all the kids dressed up as their favorite characters, including superheroes and tons of princesses,” says. McWilliams. “Once in awhile, we get a full family in costume. But to make sure everyone feels comfortable, adults can’t wear anything that covers their face and no weapons of any kind are allowed, fake or real.” Oct. 19–21, 26–28; 4850 W. Powell Rd., Powell 43065, 614/645-3400, columbuszoo.org


Cedar Point HalloWeekends, Sandusky
What started out as a way to give folks a chance to enjoy one last blast of summer fun quickly became what Jason McClure, Cedar Point’s vice present and general manager, describes as “a cool and different type of experience.” Since 1997, HalloWeekends has drawn visitors of all ages. Youngsters eagerly await the costume contest at the Peanuts-themed Great Pumpkin Fest and the opportunity to trick-or-treat for craft supplies. Teens and adults head for the six scare zones at the back of the park that are home to stalking scarecrows and Zombie High School. “For me, the scariest part is Deprivation, a pitch-black attraction filled with inflatables you have to squeeze past in order to get out of,” McClure says. “If you’re not afraid of the dark, it’s nothing. But if the dark bothers you, it definitely gets intense.” Fri.–Sun. through Oct. 28; 1 Cedar Point Dr., Sandusky 44870, 419/627-2350, cedarpoint.com

Haunted Castle of Carnage and Bloody Hollow Lights-On Matinee, Riverside
Councilman Mike Denning helped launch this attraction 30-plus years ago as a fundraiser for the Jaycees. Through the years, the organization has raised more than half a million dollars for community services. Housed in a former gristmill, the spooky site, which dates back to pre-Civil War days, is inhabited by clowns, zombies and horror icons. Freddy Krueger, Jason Vorhees and Leatherface await your arrival. But, Denning is quick to add, that doesn’t mean it isn’t family-friendly. “We have a Lights On Matinee on Oct. 20, where younger kids can tour the building to see that the monsters are not real,” Denning says. “They can decide for themselves if they want to come through in the dark.” Visit website for dates and times; 1213 Old Harshman Rd., Riverside 45431, 937/254-2576, riverside-jaycees.com

Since 1973, the woods-and-river ambiance of Sugarloaf Mountain Amphitheatre has provided a natural backdrop for “Tecumseh!” the saga of the legendary Shawnee leader who defended his Ohio homeland in the 1700s. A new experience takes the stage this month, based on a tale penned in 1819 by Washington Irving.

The Sleepy Hollow Experience at Haunted Mountain invites visitors to be part of the action as the story of the headless horseman comes to life, along with a mysterious woman in white, schoolmaster Ichabod Crane and British spy Major Andre.

After a preshow talk where the principal characters are introduced, the audience settles into their seats for Act I, then moves onto the stage for a closer look at what’s taking place.

“This is a highly theatrical production,” says producer Brandon Smith. “If you can imagine going to see ‘Phantom of the Opera’ on Broadway but instead of sitting in a theater seat, you’re sitting on the stage, that’s the kind of experience you are going to have.”

When the show ends, guests can opt to play laser tag along Major Andre’s haunted trail and solve puzzles in escape rooms.


Carnival of Horrors, Cuyahoga Falls
Nestled in the Cuyahoga Valley National Park, Blossom Music Center has been the summer home of the Cleveland Orchestra for 50 years. But as idyllic breezes give way to chilly nights and falling leaves, the woods take on a creepy quality worthy of Bach’s “Toccata and Fugue in D minor.” For 16 seasons, Ryan Pluta has staged his quartet of haunts that include a fun-house maze with endless corridors but only one way out and the Wicked Woods, where a flashlight becomes your best friend. The remarkable Freakshow in 3-D Terrorvision lets visitors view the world through glasses that seem to make walls move, floors drop and monsters pounce. “It’s a different atmosphere when you’re out there in the evening and not at a concert,” Pluta says. “The second people get out of the car, the mood settles in, and it’s really awesome.” Fri.–Sun. through Oct. 28; 1145 W. Steels Corners Rd., Cuyahoga Falls 44223, 330/576-6501, carnivalofhorrors.com

Land of Illusion Adventure Park, Middletown
The brick walkways, fire pits and streetlamps seem unassuming, but venture off the beaten path and you’ll find plenty of scares during Haunted Nights. There are demented clowns and zombies aplenty among the park’s creepy sites and a place designed to play on your worst phobia, but manager Kyle Ashley cites Temple of Terror as a crowd-pleaser. Patterned after an Egyptian tomb and shaped like a pyramid, it’s filled with what appear to be artifacts ready for discovery. “You feel like an explorer when you walk in,” Ashley says. “But as you keep walking, you realize that just maybe this is a bad idea, and maybe this isn’t an exploration because everything is coming alive.” Thur.–Sun. through 11/3; 8762 Thomas Rd., Middletown 45042, 513/423-9960, landofillusion.com

An intimidating mix that’s part cathedral, part Dracula’s castle, the Ohio State Reformatory looms large over the Mansfield countryside. More than 155,000 men came through here between 1896 when it opened and 1990 when it closed, and the site has served as the setting for several movies, including “The Shawshank Redemption.”

So it’s no surprise that more than 40,000 people make the pilgrimage to Escape from Blood Prison, the reformatory’s salute to the season.

“The building itself freaks people out when they get here,” says haunt manager Vic Amesquita. “Coming in and knowing it has a reputation for being haunted adds an extra scare factor.”

Upon walking through the foreboding front door, visitors are ushered into the central guard room with its maze-like marble floor and glass walls, before being shepherded to Granny Hatchet’s halfway house, which Amesquita describes as “part backwoods, part ‘The Texas Chainsaw Massacre.’ ”

Steps away in solitary confinement, an evil assortment of inmates dressed in the obligatory black-and-white stripes surround you with waiting arms.

“One of the actors might grab you and throw you in a cell,” Amesquita says. “And you never know what you might find roaming around in the fog and mood lighting.”

In the basement, the reformatory’s answer to a traditional haunted house attraction contains an infirmary, chapel and morgue staffed by werewolves, clowns and monsters.


The Pataskala Haunted Forest, Pataskala
Meet the Murdocks. They’ve lived here for 200 years and don’t take kindly to strangers. The clan, which consists of ghosts, aliens and a witch or two, make moonshine, perform archaic surgical procedures and love nothing more than scaring you. For 29 years, the Pataskala Lions Club has turned 13 acres into a lair that includes a mine inhabited by mad doctors, zombies and a gun-toting sheriff who hopes to put an end to the madness. “Have you ever been in the woods at night without a flashlight? That’s scary enough,” says Duaine Ashbrook, operating manager. Fri.–Sat. through Oct. 28; 8838 Refugee Rd. SW, Pataskala 43062, 740/755-9775, pataskalahauntedforest.com

Lake Eerie Fearfest, Sandusky
Designed to look like a 300-year-old Victorian home, Ghostly Manor Thrill Center lives up to its name year-round. But when Halloween nears, the center’s general manager, Billy Criscione, presents Lake Eerie Fearfest. This month, four haunted spaces with different themes flank the house: Nightmare, filled with challenging maze-like corridors; Quarantine, an insane asylum populated by zombies and mad scientists; Eerie Chateau, a home that is anything but sweet; and Dead in the Water, a ghost ship starring famous horror creatures. “People never know what’s coming next,” Criscione says. “You will be scared until the end of the tour.” Fri.–Sun. through Oct. 28, Oct. 31; 3319 Milan Rd., Sandusky 44870, 419/626-4467, lakeeeriefearfest.com