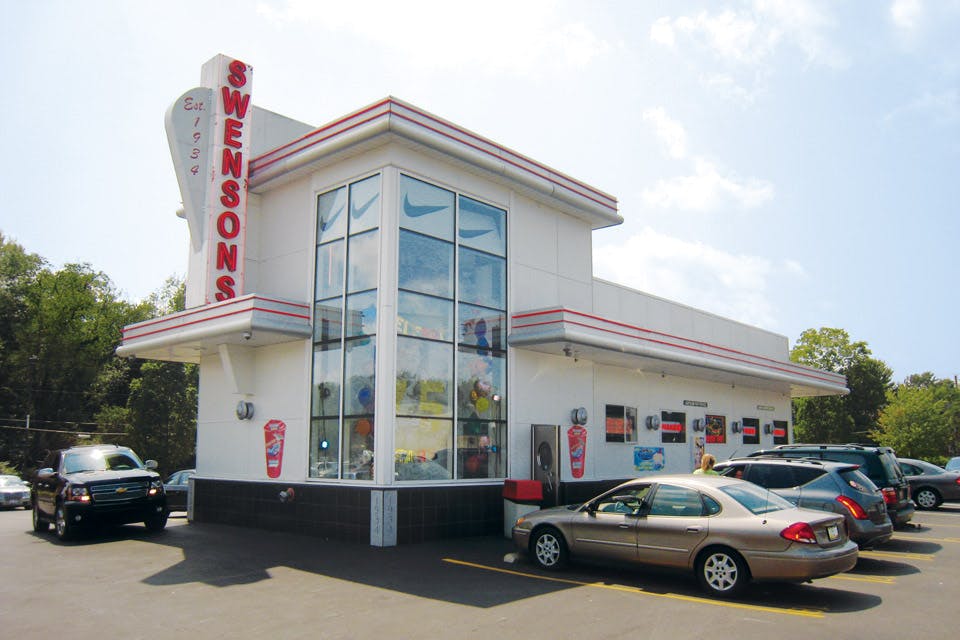 These Buckeye State favorites should be on every culinary adventurer’s map.

Although Wendy’s and White Castle garner most of the attention when it comes to signature Ohio burgers (and don’t get us wrong, we love both), there are still some famous creations across the state you’ve yet to sample. From a newer spot that features toppings such as Burgundy wine sauce with wild mushrooms and truffles to old standbys that have been making burgers the same way for decades, there’s a lot to love about the merger of beef patty and bun. Fair warning: You may have to wait a bit at some of these storied spots, but we’re pretty sure your stomach will thank you.

1. Heck’s Cafe: Located in a 120-year-old brick townhouse in Cleveland’s Ohio City neighborhood, just across the river from downtown, Heck’s Cafe opened in 1974 and quickly became known for its half-pound gourmet burgers. “By the late ’70s, it was the place to go in Cleveland,” says owner Fadi Daoud. What sets Heck’s Cafe’s burgers apart, according to Daoud, is that each patty is made from different cuts of beef, such as tenderloin, rib-eye and short rib, resulting in a delicious burger you won’t soon forget. 2927 Bridge Ave., Cleveland 44113, 216/861-5464, heckscafe.com

2. Swensons Drive-In: In 1934, Wesley “Pop” Swenson and local butcher Guy Witt created Akron’s iconic curbside-service burger shop. Patrons pull up, order and wait for their burgers, drinks and sides to arrive. “We try to get everything to you fast,” explains district manager Julie Peteya. “Even if that means running.” The concept is a holdover from days gone by, and customers flock to the eatery’s seven northeast Ohio locations for signature items such as the Galley Boy: a double cheeseburger topped with Swensons’ two signature sauces. Original location 40 S. Hawkins Ave., Akron 44313, 330/864-8416 (visit website for information on other locations), swensonsdriveins.com

3. The Thurman Cafe: This spot in Columbus’ German Village neighborhood is known for its 12-ounce patties, but true gastronomical adventurers can double down with The Thurmanator, a hulking creation that features two of the eatery’s signature patties. Most burger lovers opt for one of the more than 20 hand-formed, single-patty creations made fresh to order. “Since we are making each burger fresh,” explains co-owner Mike Suclescy, “it makes our wait time a little longer.” 183 Thurman Ave., Columbus 43206, 614/ 443-1570, thethurmancafe.com

4. Hamburger Wagon: What began as an aid mission to feed the victims of Ohio’s Great Flood of 1913 remains today as a thriving slider business that’s open daily. “We are the original food truck,” owner Jack Sperry says of the Amish milk cart where he cooks mini burgers on a 20-inch skillet. “We’ve been around for more than 100 years.” The original burger recipe created by Sherman “Cocky” Porter was a hit on Miamisburg’s market square in the early 1900s, and you can still find the Hamburger Wagon there. “We typically sell around 1,000 sliders a day,” says Sperry. 12 E. Central Ave., Miamisburg 45342, 937/847-2442, hamburgerwagon.com

5. Terry’s Turf Club: Terry Carter opened his build-your-own burger joint in 2007, and it’s become a Cincinnati favorite over the past decade. Customers can choose from a dozen cheeses and 14 sauces, and all of the restaurant’s half-pound patties are formed by hand to ensure a juicy burger. “I always tell people you need five napkins to eat these,” says Carter, who serves his burgers on special-recipe kaiser buns made by Sixteen Bricks Artisan Bakehouse. “The building blocks of every hamburger are the meat and the bun.” 4618 Eastern Ave., Cincinnati 45226, 513/533-4222