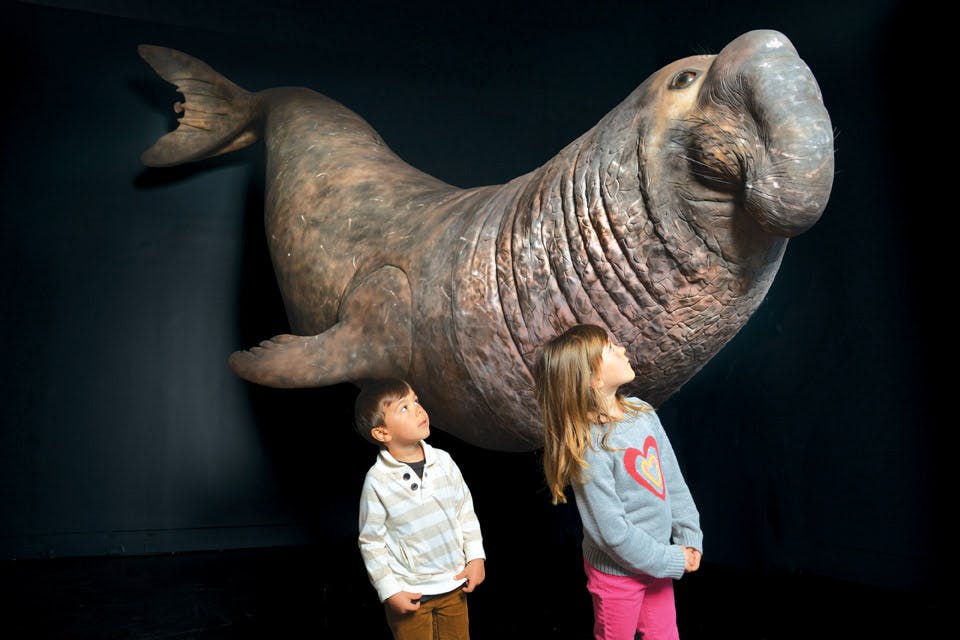 The coyote spots the horned lizard and it looks like, for a moment at least, the day isn’t going to end well for the reptile. But the small creature holds its ground and squeezes its eyes shut as if deep in thought.

Just then, a thin but powerful stream of blood shoots out of the corner of the lizard’s eye, splashing the coyote in the face. The diversion gives the reptile an opening to escape as its would-be predator bounds away in the opposite direction. The defense mechanism is as fascinating as it is surprising.

National Geographic’s video footage of the encounter is part of the Cleveland Museum of Natural History exhibition “Amazing Species: Life at the Limits,” which runs through July 9. Organized by the American Museum of Natural History in New York, it sheds light on the incredibly diverse strategies animals and plants employ to defend themselves, find food, move, breathe and reproduce.

It delves into some of the coolest, weirdest and, yes, sometimes gross adaptations that living creatures have developed over eons of evolution, which brings us back to that blood-shooting lizard. The stream of blood emanates from ducts in the corner of the animal’s eyes and can travel up to 3 feet. Not only does the survival feature serve as a distraction to those who want to do the lizard harm, but the blood also contains a chemical that is noxious to dogs, wolves and coyotes.

“When I was in the Army, I was in New Mexico and I had one of these lizards for a pet, but I never saw that,” says Timothy Matson, curator and head of vertebrate zoology at the Cleveland Museum of Natural History. “It is quite interesting.”

A walk through “Amazing Species: Life at the Limits” is a showcase of extremes. In one corner of the exhibition space, an enormous life-size model of an elephant seal dives down from the ceiling next to a chart that shows the far-reaching heights and depths animals can reach. The elephant seal is one of the deepest divers, able to routinely propel its body to an ocean depth of 2,000 feet, but has been known to go as deep as 5,000 feet. The same chart notes a Rüppell’s vulture can reach a mind-boggling height of 37,000 feet. 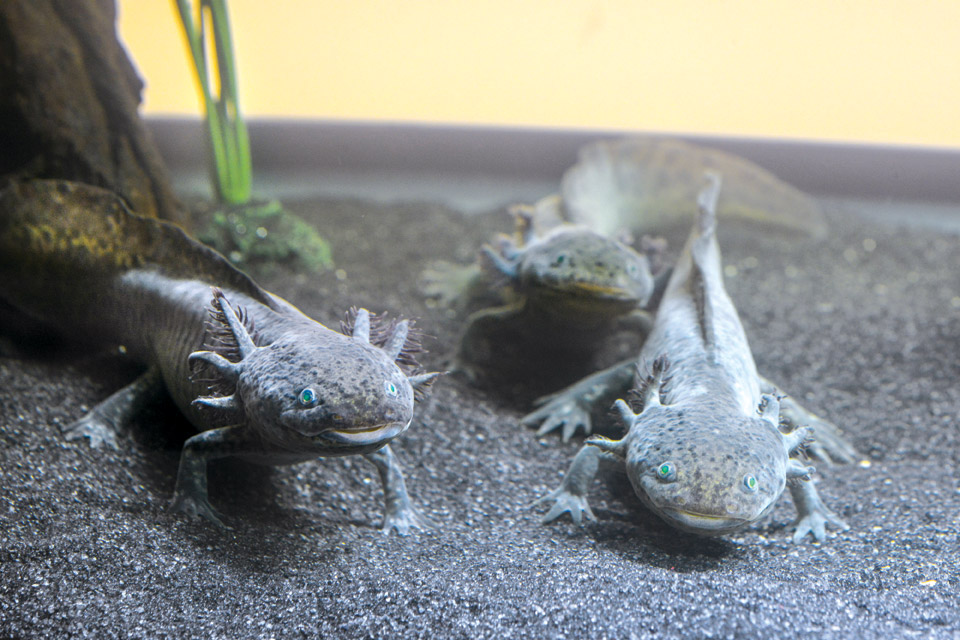 “We’re talking about things that are on the limits — on the outer edge,” explains Matson. ”What we are looking at are species that have adapted to environments that are very hostile.”

In the case of the elephant seal, the huge animal’s layers of fat, as well as its ability to conserve oxygen by diverting it from some organs in favor of others, have given it the ability to survive at such depths. But the adaptations featured throughout the exhibition are as strange and varied as the creatures covered.

A short distance away from the model of the elephant seal, an aquarium holds three live axolotl. Known as the Mexican salamander, the creature is captivating not only because it retains the gills from its larval stage throughout its lifetime, but also because it can regenerate pieces of its body.

“They have been used extensively for regeneration experiments … and if there are possibilities to apply these characteristics to people in the hopes of regenerating limbs,” says Matson. “You can remove the [axolotl’s] leg and it will regenerate. You can remove most of the tail and it will come back. It may not get as large as the original … but it will come back and allow the animal to function.”

The engrossing realities of survival showcased in “Amazing Species: Life at the Limits” are interspersed with a dose of interactive fun that captures the imaginations of kids visiting the exhibition.

Little ones are invited to climb on a huge version of the already huge Hercules beetle. (Males of the species measure 6 inches long and battle for females by lifting their rivals above their head and driving them into the ground.)

Nearby, a huge model of a wandering glider dragonfly hangs from the ceiling, giving guests an idea of what the insect’s next meal must see in its final seconds. (Thanks to its four wings, the dragonfly can reach speeds of 30 miles per hour.)

“This is an exhibit that lets you follow your curiosity … in terms of life on this planet and how it’s much more diverse, strange and unusual than we think about, because we don’t encounter these things on a regular basis,” says Evalyn Gates, executive director and CEO of the Cleveland Museum of Natural History. “It’s opening up a new window into science and the natural world around us that can’t help but pull people in.”

“Amazing Species: Life at the Limits” goes beyond animals and delves into how plants, coral and organisms living in the deepest depths of the ocean survive extreme conditions and overcome the inability to move from place to place.

One of the most attention-getting plants highlighted in the exhibition is Rafflesia, also known as the “corpse flower.” Found in southeastern Asia, the 28 varieties attract insects by putting off the scent of rotting meat. For those curious about the flower’s pungent smell, a canister gives guests the chance to take a whiff. 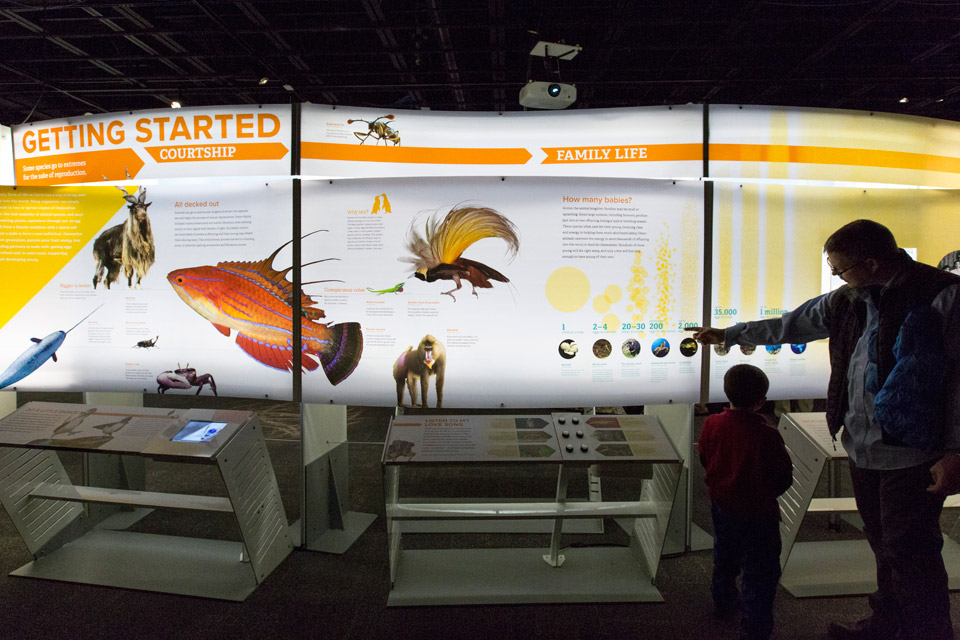 For many, the strangest organism featured in “Amazing Species: Life at the Limits” will be one that seems as if it were plucked from a science-fiction horror flick: the tardigrade. Also known as a “water bear,” the tardigrade has eight legs with tiny claws at the end of each and a pig-like snout.

Although it looks fierce, most measure around half a millimeter, or about two hundredths of an inch. Despite its minuscule size, the tardigrade is extremely resilient. It can withstand being temporarily chilled to minus 458 degrees Fahrenheit and heated to more than 302 degrees Fahrenheit.

It survives by deflating, drawing in its legs and surrounding itself with a waxy substance. When favorable conditions return, the creature makes proteins that help it revive quickly, with some of the 1,000 tardigrade species able to recover in as little as four minutes.

“They’ve been getting a lot more attention,” says Matson, who adds that tardigrades can be seen by the naked eye, but their transparent nature and extremely small size make it very challenging. He says the job is much easier with a dissecting scope or a hand lens.

“If you found a lot of moss in a really nice area, that’s the place where you’ll see a tardigrade,” explains Matson. “It’s gotten to the point now where we know quite a bit about them.”