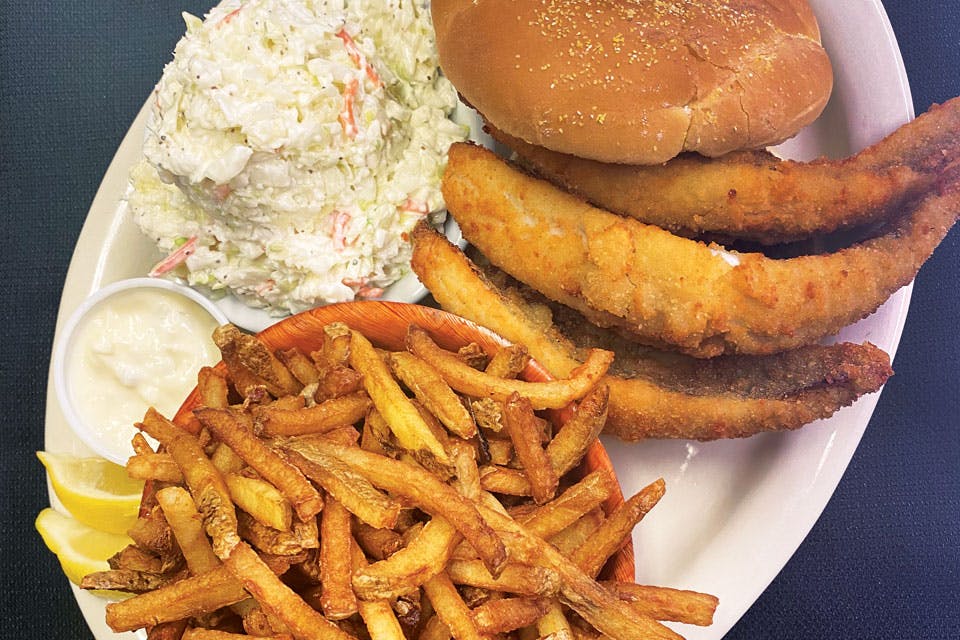 Whether you want it fried or broiled, one fish rules our Great Lake when it comes to your dinner plate.

For fans of Lake Erie fish, there’s nothing like yellow perch. Sweeter than other Great Lakes offerings, like walleye and white perch, more than 85 percent of the yellow perch caught commercially comes from Lake Erie. (It’s also regarded as one of the most sustainable fish to eat, recovering greatly from an ebb in the 1990s.) Many restaurants near Lake Erie serve their own take. These four should make your list.

The Seafood Restaurant • Sylvania: Since 1953, diners at The Seafood Restaurant in Sylvania have been able to get fish from all over, be it the Gulf of Mexico, the Atlantic Ocean or the Chesapeake Bay. But the most popular seafood items on the menu remain Lake Erie fish: perch and pickerel. For healthier eating, the perch is available broiled, but the version that’s coated lightly in cornmeal and fried remains far more popular, according to owner and general manager Candace Boardman, whose grandparents opened the restaurant. “There’s no other fish like it,” she says. 5504 W. Alexis Rd., Sylvania 43560, 419/882-9920, theseafoodrestaurant.net

Jolly Roger Seafood House • Port Clinton: The Jolly Roger has been a summertime staple since 1980, but in 2017 the restaurant began staying open year-round, which has kept its staff surprisingly busy and the residents of Port Clinton and the surrounding area quite happy. In addition to its fried perch, the restaurant breads its own onion rings and mushrooms daily, and makes its own cocktail sauce and tartar sauce, the latter of which is mustard-based and yellow. “It throws some people off at first, but we have people who buy it in bulk,” says Edmond Hoty, one of the restaurant’s owners. 1737 E. Perry St., Port Clinton 43452, 419/732-3382, facebook.com/jollyrogerseafoodhouse

Flat Iron Cafe • Cleveland: The Flat Iron Cafe opened its doors in Cleveland’s industrial flats in 1910, and it’s believed to be the city’s oldest restaurant. Perch has been on the menu since the 1940s but only on Fridays at first. It became an everyday option in 1995 and has since grown into one of the eatery’s most popular offerings. “When people think of the Flat Iron, they think of perch,” says owner David Steele, adding that the restaurant’s location helps keeps things fresh. “The fish market across the street catches it, cleans it and then walks it across the street.” 1114 Center St., Cleveland 44113, 216/696-6968, flatironcafe.com

Brennan’s Fish House • Grand River: Over the past 150 years, the building at 102 River St. in Grand River has been a hotel, a bar and a restaurant. Since 1973, it’s been home to Brennan’s Fish House, a place known for its collection of wonderfully eclectic decor donated by loyal customers over the years. “People bring their things and want them in the restaurant,” says owner Sharon Hill. “It’s personal to us all.” The perch recipe here is a simple one that has been handed down for generations: lightly breaded and quickly fried. “I think that makes the difference,” Hill says. Note: Sharon Hill sold the business to Tim Freeman, who continues to serve up the same great dishes regulars and visitors have come to love since 1973! 102 River St., Grand River 44045, 440/354-9785, brennansfishhouse.com

This article originally appeared in our March 2020 issue. New Sandusky Fish Co. has since closed.

New Sandusky Fish Co. • Sandusky: The New Sandusky Fish Co. is more than a place to get a perch sandwich. The restaurant also sells perch (and walleye — that other Lake Erie staple) that can be taken home and cooked and will clean the day’s catch for local anglers. Tony Spino opened the restaurant in 2000, and his grandson Billy Haggerty now manages the place. The restaurant is open seasonally, but that ensures each fish’s journey to your plate is a short one, according to Spino. “The perch we serve was swimming yesterday,” he says. 235 E. Shoreline Dr., Sandusky 44870, 419/621-8263. Permanently closed in Fall 2021.