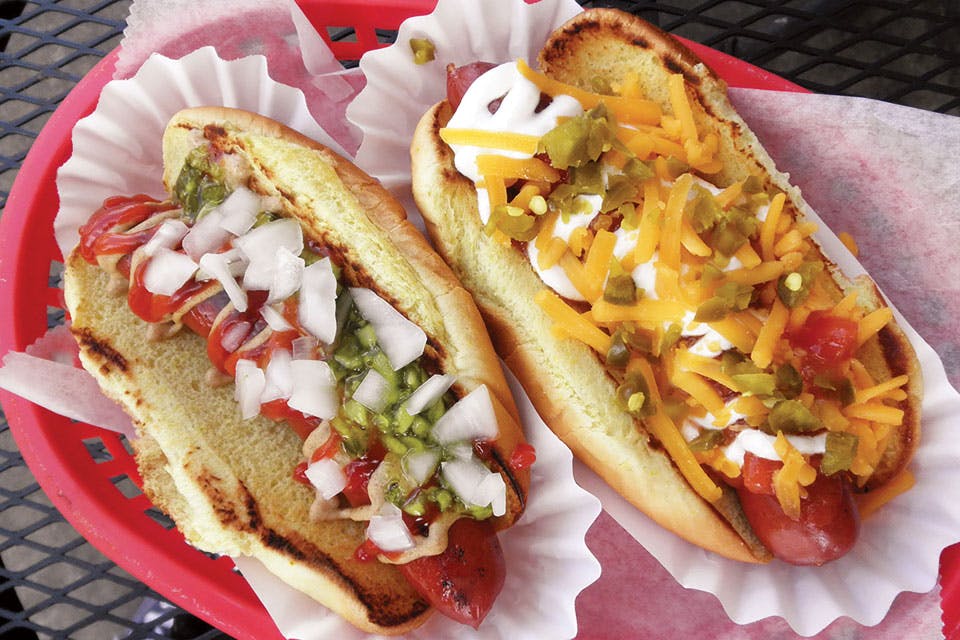 From twists on classic creations to a laundry-list of toppings, these spots do it right.

It’s easy to dismiss the simplicity of a hot dog. It’s also not fair. From Cincinnati to Cleveland — and all points in between — restaurants abound that put their own spin on the humble frankfurter (and how you can dress it up). From retro spots to a trendy gastropub, here are five places to get a hot-dog fix that are well worth your attention.

1. Happy Dog • Cleveland: Happy Dog co-owner Sean Watterson remembers the Polish restaurant that formerly occupied he and his business partners’ Detroit Shoreway neighborhood spot. “They served everything under the sun, plus kielbasa,” he says. In 2008, that space became home to the Happy Dog, which is now a destination known for its beef and vegetarian hot dogs with a choice of 50 different toppings and tater tots to be enjoyed with a lineup of more than a dozen condiments. Happy Dog also frequently hosts bands, poets and lecturers. “We view ourselves as the neighborhood’s living room,” Watterson says. 5801 Detroit Ave., Cleveland 44102, 216/651-9474, happydogcleveland.com. As of February 2021, Happy Dog is temporarily closed.

2. Dirty Frank’s Hot Dog Palace • Columbus: This spot opened in 2009 as a low-key alternative to downtown Columbus’  white-tablecloth restaurants and has since taken on a life of its own. The restaurant features Vienna beef, vegetarian or vegan dogs served on a poppy-seed bun (a nod to the owner’s Chicago roots). Dirty Frank’s first offering was a Chicago-style dog, which remains among the menu options today. Or, get creative by choosing from a list of more than 50 toppings. “If you don’t like what’s on the menu,” says manager Steve Heighton, “you can make your own.” 248 S. Fourth St., Columbus 43215, 614/824-4673, dirtyfrankscolumbus.com

3. O’Betty’s Red Hot • Athens: When you’re eating something as American as a hot dog, why not celebrate another American art form: burlesque. All the menu options here are named for famous burlesque dancers and the place’s name itself is suggestive of the entertainers that were once popular in the U.S. The small hot dog shop is also home to a hot dog museum: a collection of hot dog memorabilia from cooking utensils to bun warmers. “We had to take the museum out last year for construction,” says owner Bob Satmary, “and people would ask when it was coming back.” 15 W. State St., Athens 45701, 740/589-6111, obettys.com

4. Senate • Cincinnati: Chef Daniel Wright and his wife Lana own four eateries in the Over-the-Rhine neighborhood, including Senate. The gastropub is all about gourmet hot dogs, with options like the Spuds Mackenzie (topped with bacon, duck-fat fries, cheese sauce, pickled jalapenos and sour cream and chives) and the Croque Madame (topped with ham, béchamel sauce and poached egg). Wright’s favorite is the Trailer Park Dog, featuring bacon, cheese, coleslaw and the ingredient that he says ties everything together: crushed Grippo’s potato chips. “It’s sweet and spicy and one of the best chips ever,” he says. 1212 Vine St., Cincinnati 45202, 513/421-2020, senatepub.com. As of February 2021, Senate is temporarily closed.

The original version of this story included this about Retro Dog, which is now closed:

Retro Dog • Cuyahoga Falls: This old-school spot is hopping during the summer, thanks to its proximity to Blossom Music Center and local youth baseball fields. “Nothing says baseball like going to get a hot dog and milkshake after the game,” says general manager Pete Holan. Retro Dog offers a rotating selection of specialty milkshakes alongside its lineup of classic and creative hot dogs, which range from The Beast (a footlong dog topped with sweet pickle relish, yellow mustard and ketchup) to the Mac Diggity Dog (topped with macaroni cheese, bacon and Sriracha). 350 E. Steels Corners Rd., Cuyahoga Falls 44224, 330/928-3500, retrodog.com