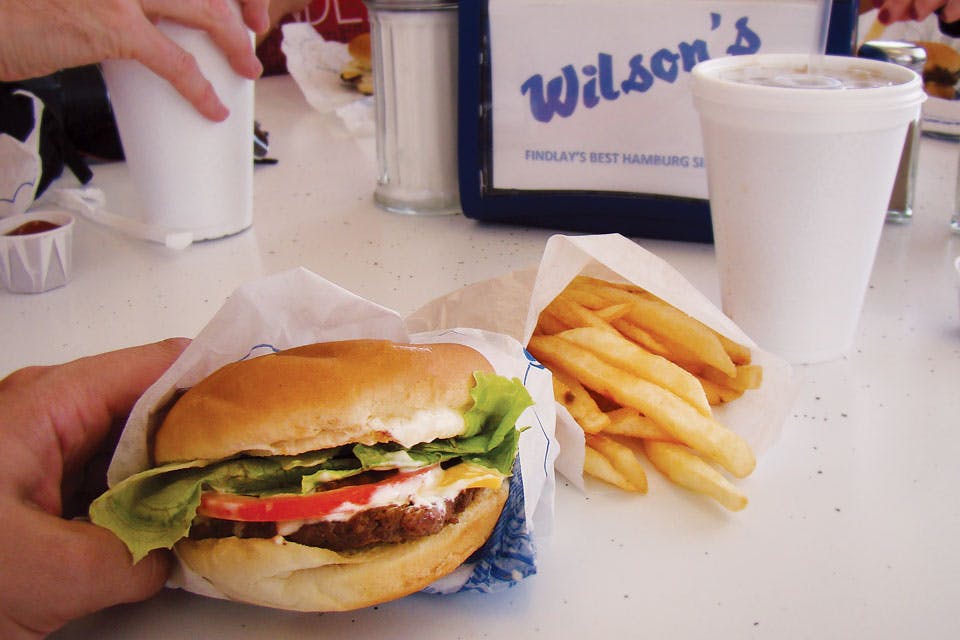 When you want a legendary burger, look no further than these longstanding spots.

Whether you prefer yours plain, with a slice of cheese or piled high with plenty of toppings and condiments, the hamburger is a canvas for all kinds of culinary creativity. But sometimes, you just want to keep things simple and delicious. Check out these Ohio burger joints that have made serving up the perfect patty not only an art form but a legacy that stretches generations.

1. Swensons Drive-In Restaurants • Akron: The energetic servers dart to and fro, filling orders in what usually amounts to just under 8 minutes. It’s one of the attributes that has made this place so popular since Akron resident Wesley T. “Pop” Swenson opened his drive-in in 1934. “We strive for white-tablecloth service at an affordable rate,” says Swensons’ marketing manager Tiffany Reed, who started her career there making milkshakes at age 16. Order the Galley Boy, a double cheeseburger with two special sauces. “The sauces complement each other so well,” Reed says. “They give the burgers a flavor that can’t be beat.” 40 S. Hawkins Ave., Akron 44313, 330/864-8416, swensonsdriveins.com

2. Midway Oh Boy • Elyria: For Kim Disbrow, a trip to Midway Oh Boy in her hometown was always a treat. “We would celebrate a good report card or the end of the school year there,” she says. Her parents David and Carole Disbrow bought the restaurant in 1987 and although Kim is a teacher in Pittsburgh, she comes home to help out. The menu features a variety of sandwiches, but it’s the Oh Boy (a double-decker, bun-in-the-middle cheeseburger topped with lettuce and a special mayonnaise sauce) that’s garnered legions of fans, including chef Michael Symon who told audiences on “The Chew” he’d been eating them his entire lifetime. 6620 Lake Ave., Elyria 44035, 440/324-3711, midwayohboy.com

3. Wilson’s Sandwich Shop • Findlay: Wilson’s Sandwich Shop adheres to a simple system that began in 1936 when it opened. Customers order “hamburgs” cafeteria-style: If you want it plain, say “without.” For a cheeseburger, it’s “with.” “Everything” means add mustard, pickle and onion, while “all four” translates to mustard, pickle and onion with ketchup. “Regulars still use the lingo, but you don’t have to know it to get a good meal,” says Doug Baker, who’s owned the shop with his wife Stacy since 2014. Although Wilson’s has chili, hot dogs and BLT’s, its burgers are its bestsellers. 600 S. Main St., Findlay 45840, 419/422-5051

4. Crabill’s Hamburger Shoppe • Urbana: This burger spot was founded in 1927, when milkman Forest Crabill began selling sliders for a nickel in a garage in downtown Urbana. “We’ve kept things pretty much the way my grandfather did,” says owner Marsha Hiltibran. “He believed sliders were unique and the perfect size for little ones. If you’re really hungry, you can order a double.” The tiny restaurant only has counter space for eight diners. “Customers are like family,” Hiltibran says. 727 Miami St., Urbana 43078, 937/653-5133, crabillshamburgers.com.

5. K’s Hamburger Shop • Troy: The neon “Eat” sign shaped like a chef has long welcomed diners to K’s Hamburger Shop, the restaurant Marcia Bodmer’s parents Paul and Doris Klein and Paul’s twin brother David opened in 1935. “Dad would always say every time someone chooses to spend a nickel with you, you should be grateful,” says Bodmer, who started working there at age 13 and is now the owner. “That’s a philosophy we believe today.” That old-school approach also applies to the feel of the place, according to Bodmer. “Walking in here is like a time warp,” she says. 117 E. Main St., Troy 45373, 937/339-3902, kshamburgershoptroy.com