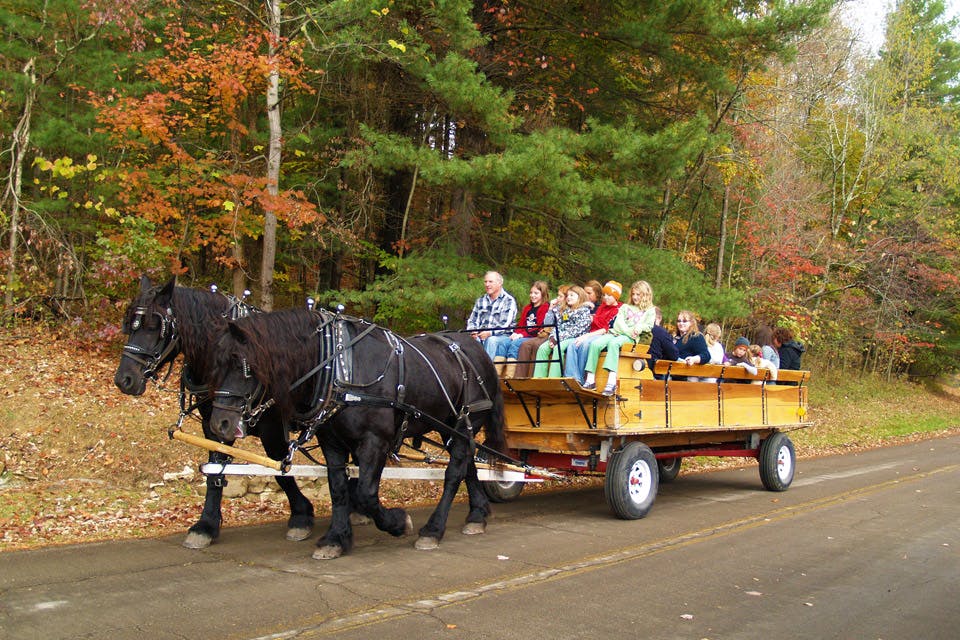 Check out six autumn events in one of Ohio’s least populated and most scenic counties.

Morgan’s Raid Re-enactment
Sept. 14–18
Two years of planning culminates in this event that re-creates our state’s attack by Confederate forces in 1863. The 13-day raid by more than 1,900 cavalrymen swept across southeastern Ohio from Wilkesville to Buffington Island on the Ohio River, and this re-enactment will follow Gen. John Hunt Morgan’s 55-mile ride.

Dressed in period-appropriate attire, participants will camp along their trek. Although the public is not permitted to ride with the cavalry re-enactors, there are several social events over the course of the route. A Sept. 16 skirmish in Chester is followed by a dance. Another dance and dinner takes place in Portland the next day. But the main event is an all-day encampment and battle scene on Sept. 18.

“We’re planning to have riverboats that will have cannons on them,” event co-chair Constance White says of re-creating the final fight where Morgan was ultimately defeated. “It was the only major battle in the Civil War in the state of Ohio.” morgansraidreenactment.com

Vinton County Air Show
Sept. 18
The Vinton County Airport has one runway and covers just 55 acres, but this annual air show has drawn spectators for more than four decades with a number of aerial performances, including a skydiving St. Nick.

“Santa Claus jumps out of an airplane, and while he’s skydiving, the plane … makes another pass and dumps candy,” says Nick Rupert, president of the Vinton County Pilots and Boosters Association, which operates the airport. This free event includes formation flying by the Red Dragon Chinese Yak Flying Team, aerobatic shows by radio-controlled aircraft and the opportunity for spectators to purchase a ride in the sky once the day’s performers have landed.

“There were [many] furnaces in the state,” says Ohio State Parks naturalist John Hickenbottom, explaining that Ohio’s abundant natural resources led to a boom in iron production during the 1800s. “The iron produced in those furnaces aided in the Civil War.”

The 3-mile hike covers relatively level terrain, making it an accessible walk for most. Led by naturalists and volunteers from nearby Hocking College, it encourages questions and an appetite. A traditional meal of homemade cornbread and beans waits at the end of the trail, as well as sassafras tea. “For a long time people have used the [sassafras] roots for tea,” says Hickenbottom. “It smells kind of like Froot Loops. It’s spicy and just a nice, subtle tea.” 27331 St. Rte. 278, McArthur 45651, 740/596-4938, parks.ohiodnr.gov/lakehope

Midnight at Moonville
Oct. 15
Cyclists, hikers and horseback riders all pass through the Moonville Tunnel by day as they traverse the rail-bed-turned-recreational-byway that passes through Vinton and Athens counties. But by night, the tunnel is a place of paranormal activity, or so the legends go.

“A brakeman for the railroad was in the tunnel with his lantern, trying to signal the train as it was coming to stop, and he wasn’t able to,” says Brian Blair, president of the Moonville Rail Trail Association. The brakeman’s ghost has become ingrained in local lore, and it’s part of the allure of Midnight at Moonville, an event that celebrates the history and heritage of the old train line while delivering a few Halloween-season chills.

Along with craft and food vendors, live music and wagon rides, guests will have the chance to encounter ghost hunters hard at work. “If you look real close and you see just right,” says Blair, “you’ll see the brakeman’s lantern.” 27331 St. Rte. 278, McArthur 45651, 740/596-4938, vintoncountytravel.com

Leaf Peep/Young Eagles
Oct. 16
Launched more than a decade ago, this annual free event began in part as a way to give kids ages 17 and younger their first taste of aviation. But members of the Vinton County Pilots and Boosters Association soon noticed that interest in the two- and four-seat plane rides reached beyond just youth.

“A lot of adults have never been in a small airplane,” says Steve Keller, secretary of the Vinton County Pilots and Boosters Association. “Many have been in a big one, but flying in a small one is a very different experience.”

The all-day event serves as a fundraiser for the airport. Volunteers prepare picnic-style foods to sell to attendees (perhaps best saved for after a flight) and a rotation of three aircraft takes turns carrying passengers over Vinton County and the Hocking Hills. A 25-minute ride, which costs $30 for adults and is free for kids, promises breathtaking views of the mid-October foliage.

Attractions span four locations throughout Lake Hope State Park, starting at Lake Hope Lodge and extending to the Hope Schoolhouse, the Iron Furnace and the park’s nature center, with vendors, demonstrations and activities set up at every turn.

“We have atlatl throwing — which are long spears — we have crosscut saws, we have a wood carver,” says Lori Grupenhof, assistant park manager of Lake Hope State Park. “We have a tractor parade with some of the old tractors that were used way back when.” Instead of traditional trick-or-treating, event coordinators hide candy in haystacks for kids to find throughout the day, and wagon rides are part of the evening offerings. There’s even a pet costume parade.