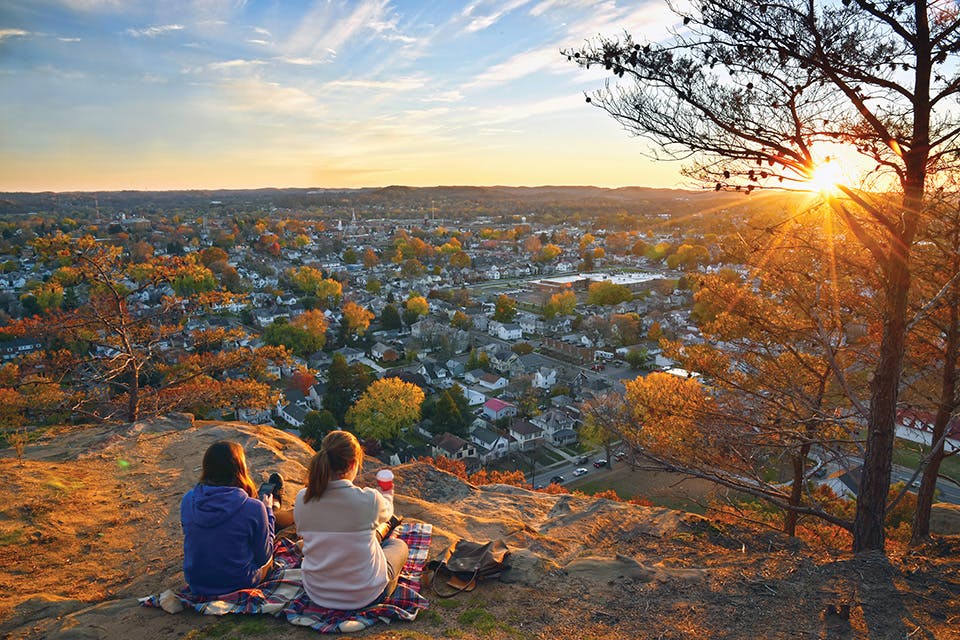 From a lookout point high above Lancaster to a shot of the Milky Way across the treetops of the Hocking Hills, these 16 photographs show the Buckeye State at its most beautiful.

Mount Pleasant, Lancaster
Lancaster’s Rising Park is home to a 250-foot sandstone bluff called Mount Pleasant, which offers expansive views of the town below. Columbus-based photographer Randall Schieber was visiting the spot one fall evening when he happened upon two women sitting atop the bluff, which he says only made his photo better. “I really liked the way it turned out because I like to do overviews without people, but I also like to have people in there to give it the human element,” Schieber says. “It helps to give you better depth and better sense of perspective.” Instagram: @rlschieber3 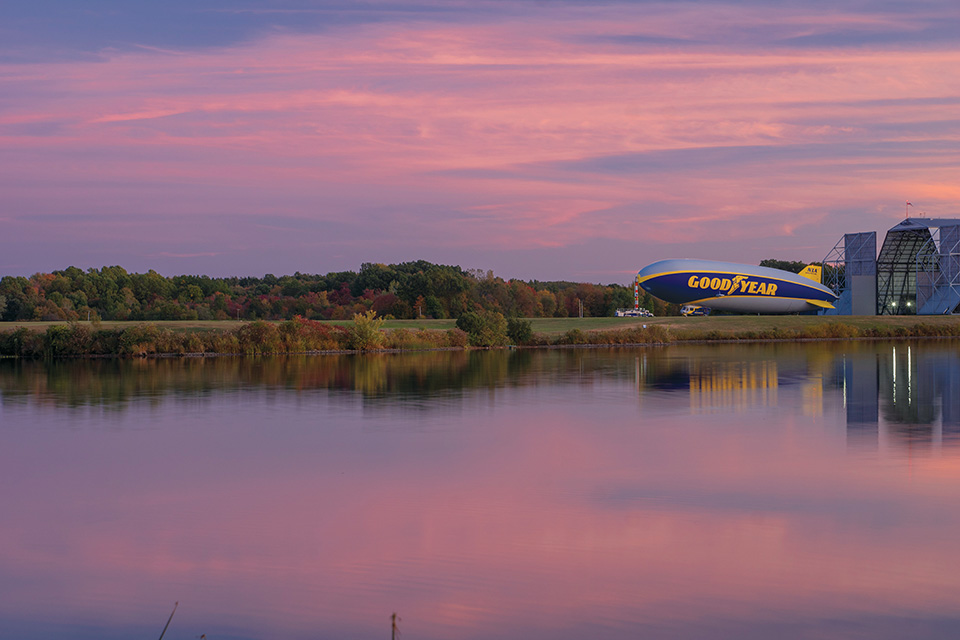 Wingfoot Lake State Park, Portage County
Just across Wingfoot Lake near Mogadore lies the hangar that houses the Goodyear Blimp. Those who fish or walk their dogs at Wingfoot Lake State Park often get the treat of watching the iconic airship leaving or returning. It’s one of the reasons Liz Schweitzer of North Canton loves visiting. “I had actually been walking around the park and the blimp hadn’t been there,” Schweitzer recalls. “Right before sunset, I was at the other end of the park and I saw it flying in, so I ran to go catch it.” She ended up with this shot to add to her collection of Goodyear Blimp photography. Instagram: @honkytonkhellion 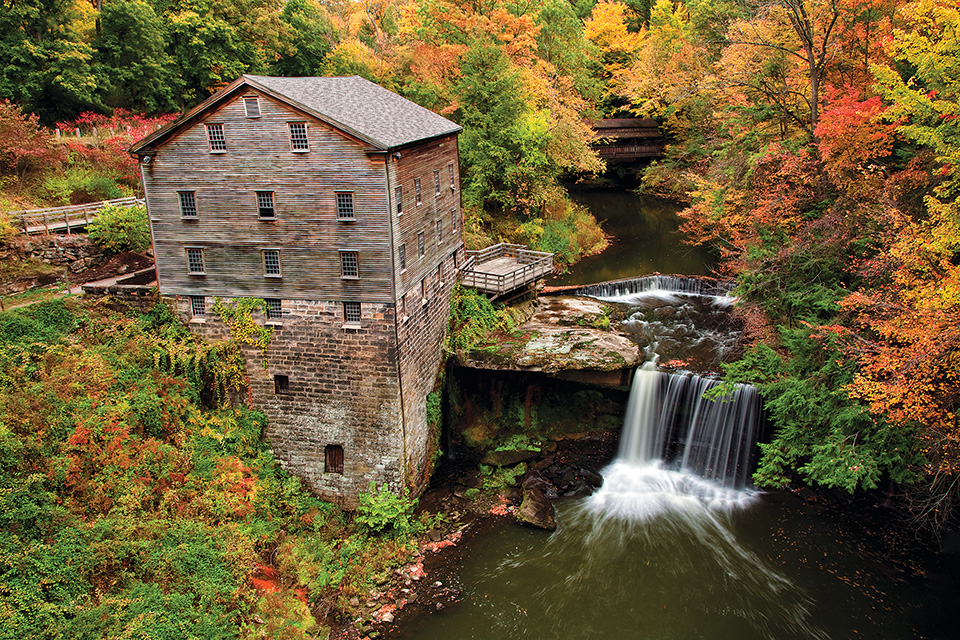 Lanterman's Mill, Youngstown
Located within Youngstown’s Mill Creek MetroParks, this historic and picturesque mill is nestled along U.S. Route 62. The stunning reds, yellows and oranges that frame Lanterman’s Mill combined with the rushing water create a soothing and tranquil atmosphere. Photographer Darrell Moll of Norwalk traveled to capture this image after seeing the structure in a book. “Just the sound of that water coming over, hitting the rocks in the bottom, it just kind of relaxes you,” says Moll. “Your body just kind of gives up ... and says, ‘You know what? This is a pretty special place.’” Instagram: @darrellmollphotography 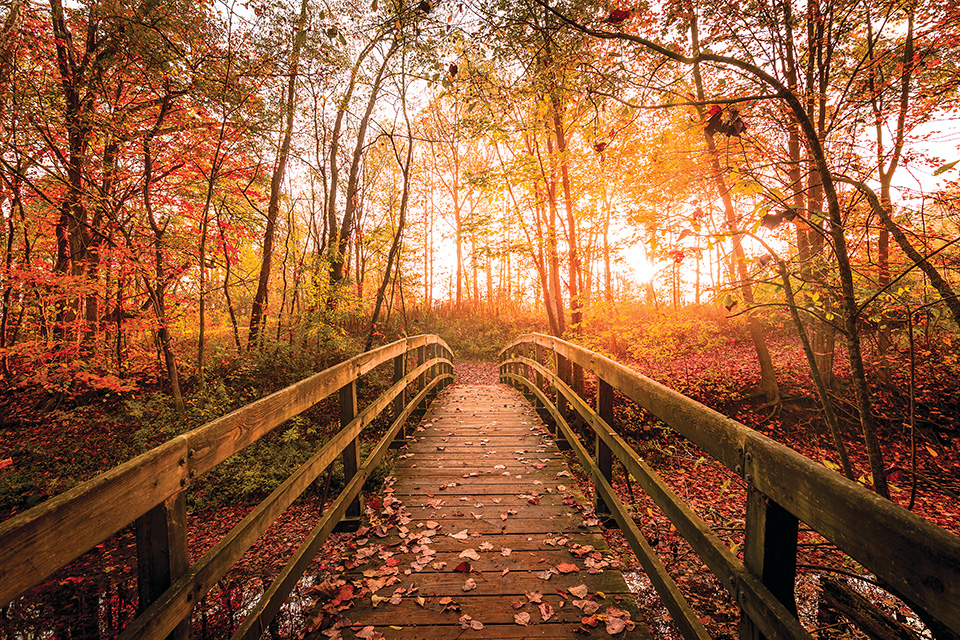 Hubbard Valley Park, Medina
Photographer Nick Hoeller is always looking for new locations to capture near his Medina home, with many of his images featuring beautiful landscapes. He created this photo at the city of Medina’s Hubbard Valley Park one fall day when the conditions were just right. “The morning that I went out, it was beautiful,” he recalls. “There was a little fog in the air, the sun came up really nicely through the trees ... even the colors, it’s just something you can’t redo.” Hoeller says he enjoys photographing red and orange fall leaves because they saturate the photo and make it pop. Instagram: @nickhoeller 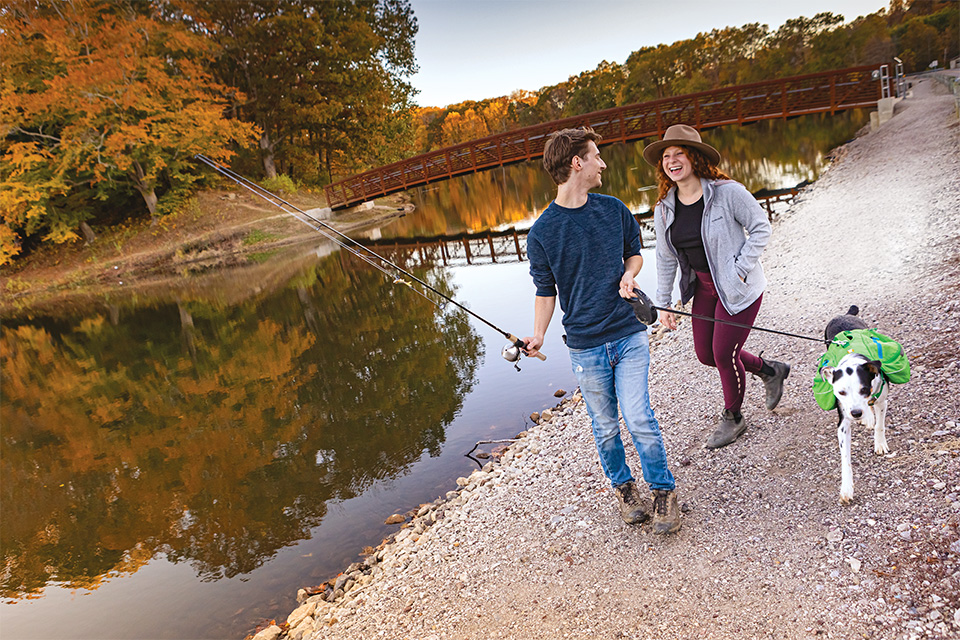 Lake Alma State Park, Wellston
Having never visited Lake Alma before, photographer Laura Watilo Blake was pleasantly surprised to find its beauty hidden within the heart of Vinton County. “It’s a special place, a small gem that most people don’t necessarily know about,” says Blake, who admits that she would have never known about it without her penchant for wanting to explore unfamiliar spots throughout our state. “It’s been my goal to discover every corner of Ohio,” she says. “There’s always something new to find. ... You don’t think it can get better, then the next day something amazing happens.” Instagram: @ohiojourneys 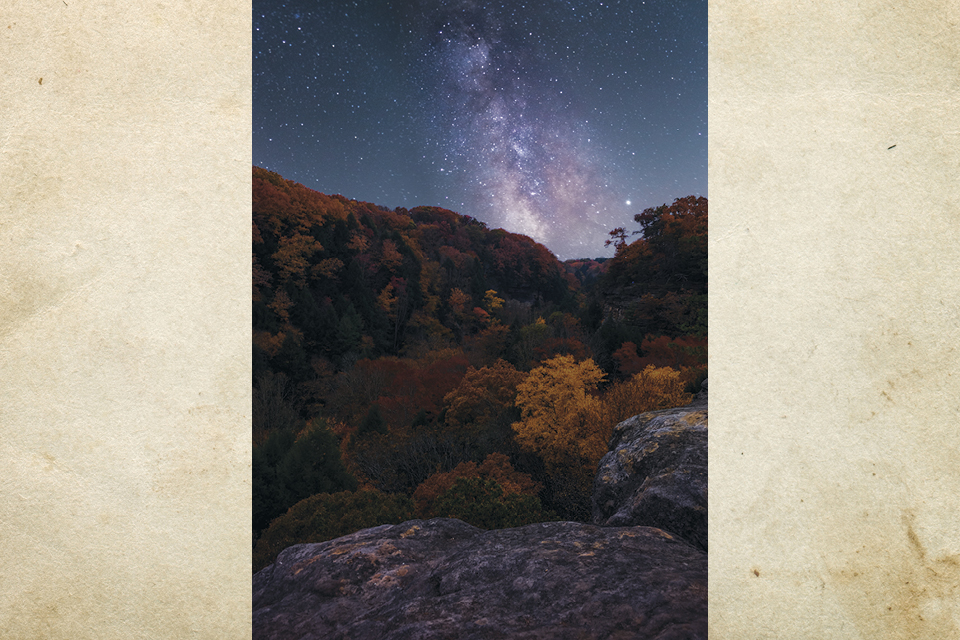 Hocking State Forest, Hocking County
One of Columbus photographer Matt Huber’s hobbies is capturing photos of the Milky Way galaxy. He created this one at a gravel pull-off along state Route 374 in Hocking State Forest. “That whole area turns really bright colors at that time of year, and I was trying to think of creative ways to get that in the foreground,” Huber says, noting that the trees make the Milky Way stand out. “The shot was two exposures stacked on top of each other. One to get all the colors and one for the actual Milky Way.” Instagram: @_mhuber 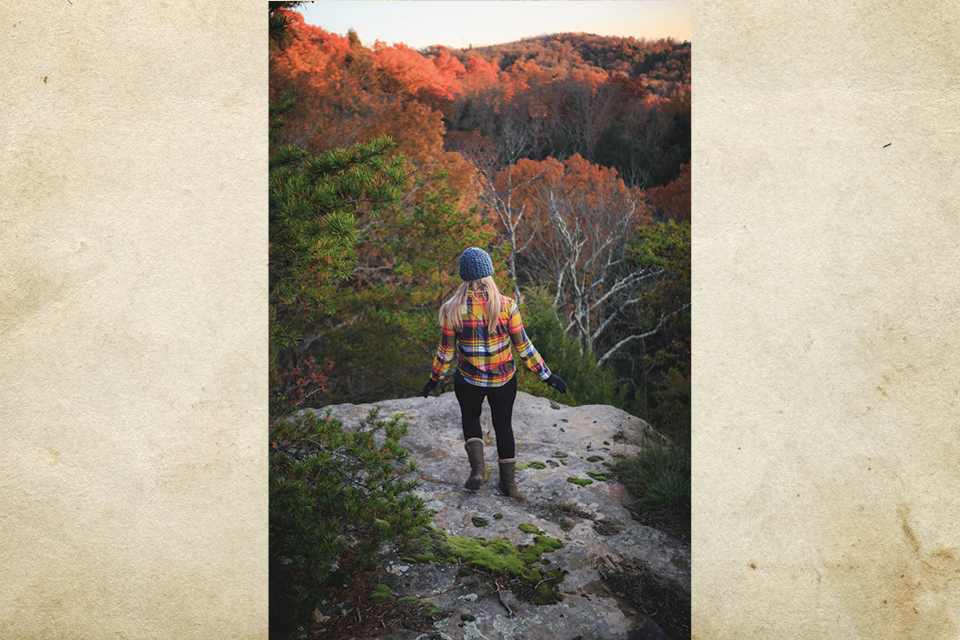 Airplane Rock, Hocking County
The trailhead for Airplane Rock is located just a short drive from Conkles Hollow State Nature Preserve. Photographer Corey Fry says this rugged hike is a good one because it’s less visited than other areas and promises a breathtaking finale. “It’s gorgeous,” he adds. “It’s not one of the main spots that people know about.” Fry first experienced the Hocking Hills as a child and has been visiting ever since. “You just kind of keep hiking and keep exploring,” he says. “There are a lot of places you kind of have to go out of your way to find still.” Instagram: @seeefry 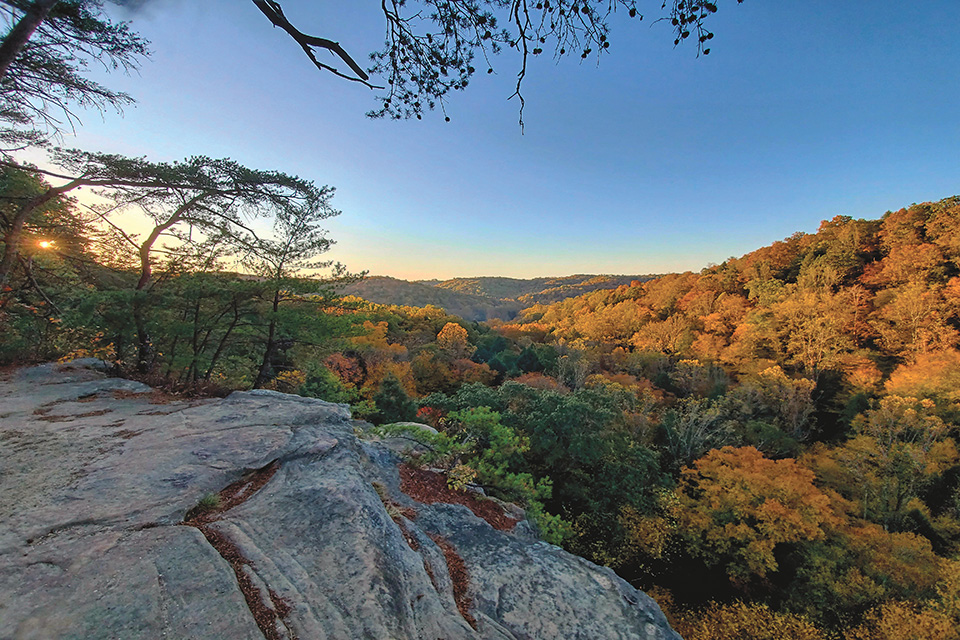 Conkles Hollow Rim Trail, Hocking County
The rim trail at Conkles Hollow State Nature Preserve is known for its scenic overlooks that provide incredible forest views. “It’s my favorite trail down there,” says Dave Edmonds. “You get a lot of bang for your buck, so to speak.” Edmonds has hiked the route many times over the past 20 years and recommends visiting at sunrise or sunset for getting the most out of one of the Hocking Hills’ most incredible views. “If you get there real nice and early, you get the crisp air of the fall,” he says. “It’s just a magical spot to watch the sun come up.” Instagram: @huthehunter 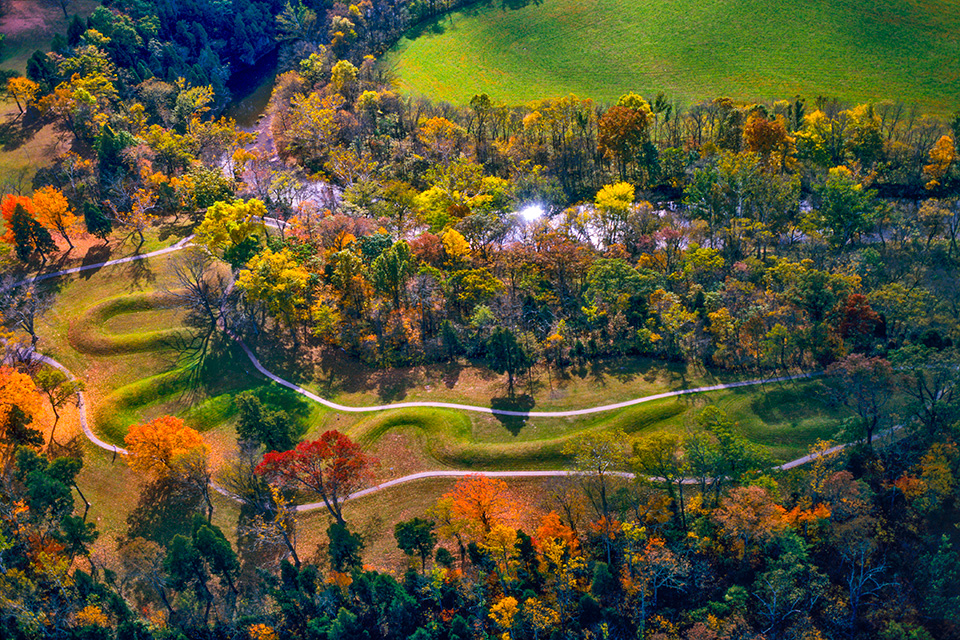 Serpent Mound, Adams County
Built more than 1,000 years ago by the Fort Ancient people in what is now Peebles, Ohio, the Serpent Mound is one of the most recognizable ancient earthworks with its long, serpentine form and curving tail. Photographer Tom Till traveled from Moab, Utah, to create this image from a plane. “This is one of the most striking of the mounds,” says Till, being well-acquainted with similar earthworks from his photographic journeys across all 50 states and 130 countries. “I shot this on film late in the day. I got really lucky with the lighting.” Instagram: @tomtilltours 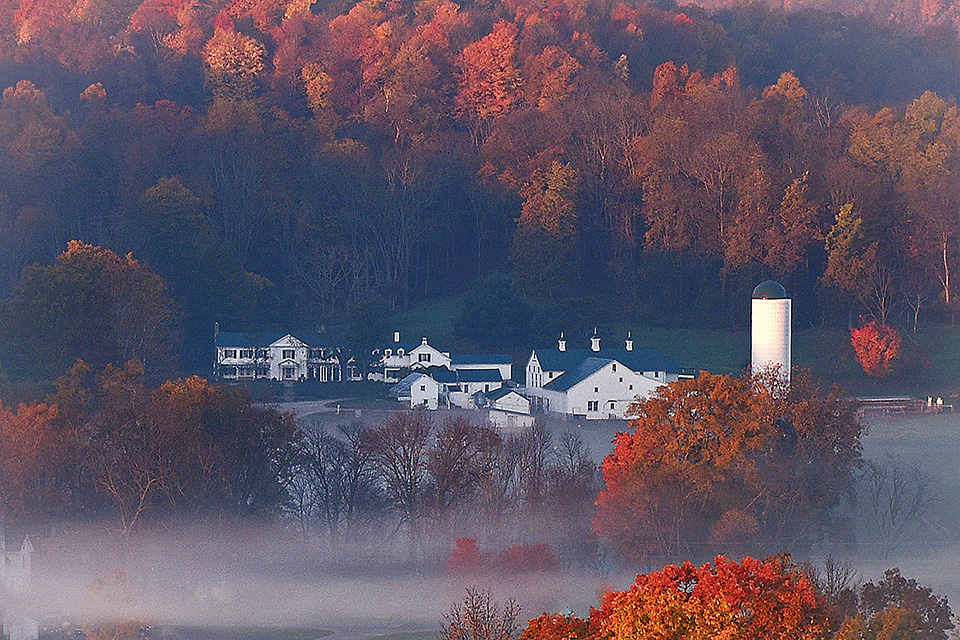 Mount Jeez, Perrysville
Located near the northern edge of Malabar Farm State Park, which was established by author and conservationist Louis Bromfield in the 1930s, Mount Jeez was named for the wowed exclamations the impressive views of the countryside and farm below elicit from visitors. Lexington resident Chuck Hagan visited a few times during 2016 to capture the progression of the autumn colors. “It’s an iconic place around here, especially in the fall,” he says. “You get a lot of fall colors, and you can sometimes get the fog coming off Pleasant Hill Lake in the other direction of the farm.” Instagram: @chuckhagan 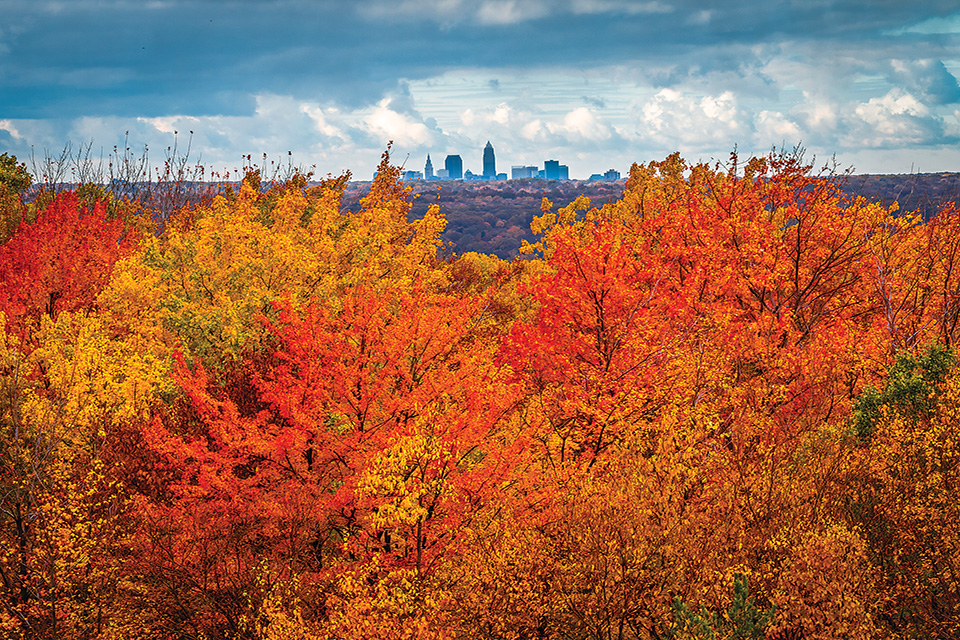 Gildersleeve Mountain, Kirtland
Located just 18 miles east of Cleveland, Gildersleeve Mountain in Lake Metropark’s Chapin Forest Reservation offers an incredible view of autumn treetops with the skyscrapers of downtown far in the distance. Cleveland-based photographer Gabe Leidy likes to capture his city’s skyline in various ways, including from this unique and seldom-seen vantage point. Gildersleeve Mountain offers such a striking perspective because the geological formation sits 1,163 feet above sea level. “It’s also a really good spot for fall colors,” Leidy says. “I think it’s the composition of hardwood trees that are growing there.” Instagram: @gabe_leidyphoto 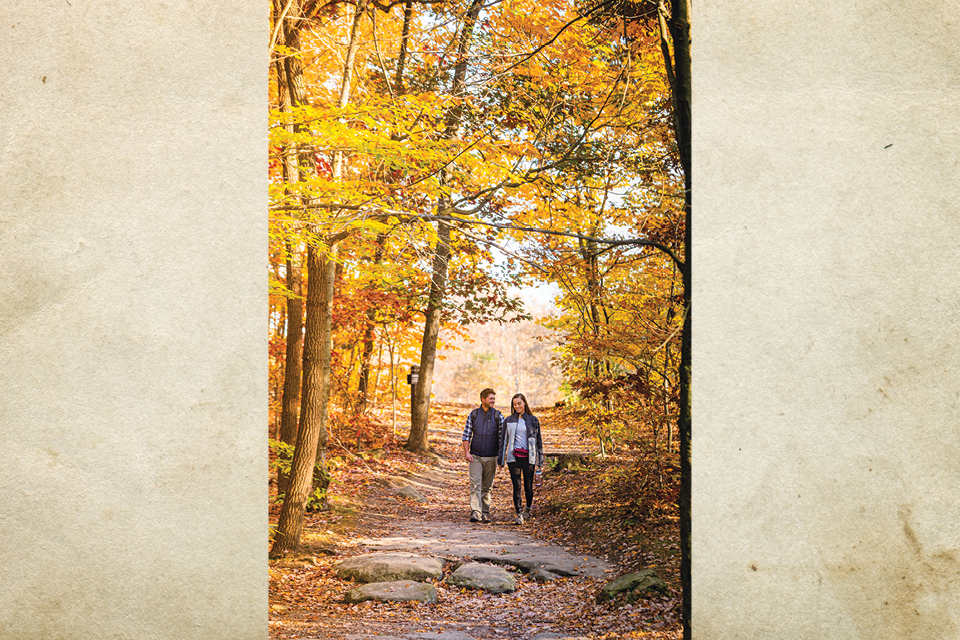 Trail to Ledges Overlook, Peninsula
To photographer Laura Watilo Blake, there’s something about having so much nature in one spot that makes Cuyahoga Valley National Park’s Ritchie Ledges such a beautiful place to visit come fall. The Cleveland-based photographer captured this image of a couple on the trail leading to the Ledges Overlook. “The towering cliffs and the trees make you feel so small compared to what mother nature has thrown at us,” she says. “And [Ritchie Ledges] offers great opportunities to scramble among the rocks, explore and make you feel like you’re the first one to discover something new.” Instagram: @ohiojourneys 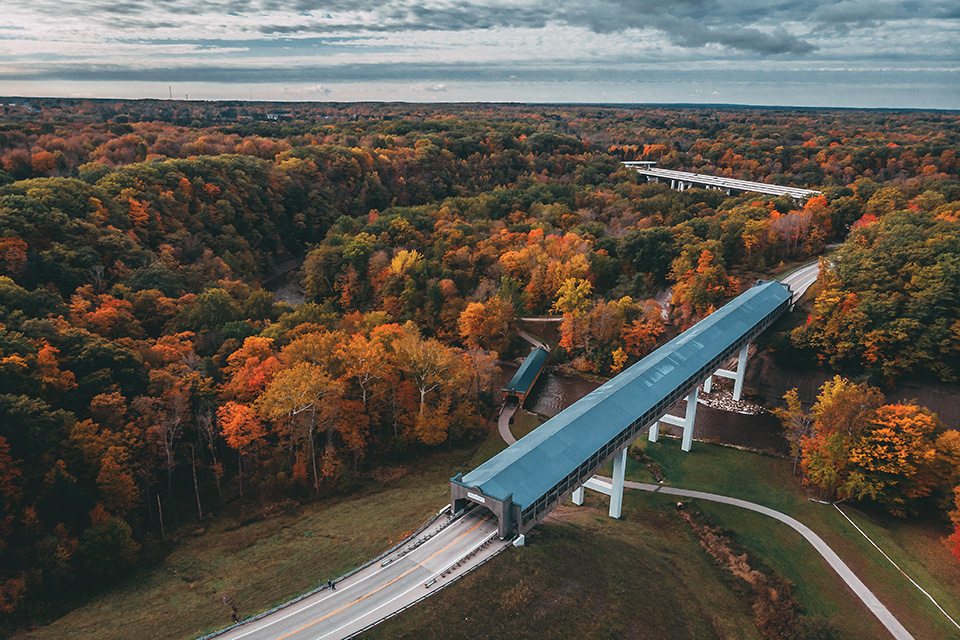 Smolen-Gulf Bridge, Ashtabula
Photographer Chris Rhodes’ bird’s-eye view of the Smolen-Gulf Bridge captures the beautiful structure at the height of fall color. The span, which is the longest covered bridge in the United States at 613 feet , was opened in 2008 and designed by former Ashtabula County engineer John Smolen, who made it his work to preserve the county’s historic covered bridges while also building new ones that pay tribute to the area’s heritage. As Smolen once told us, “This is covered bridge country.” 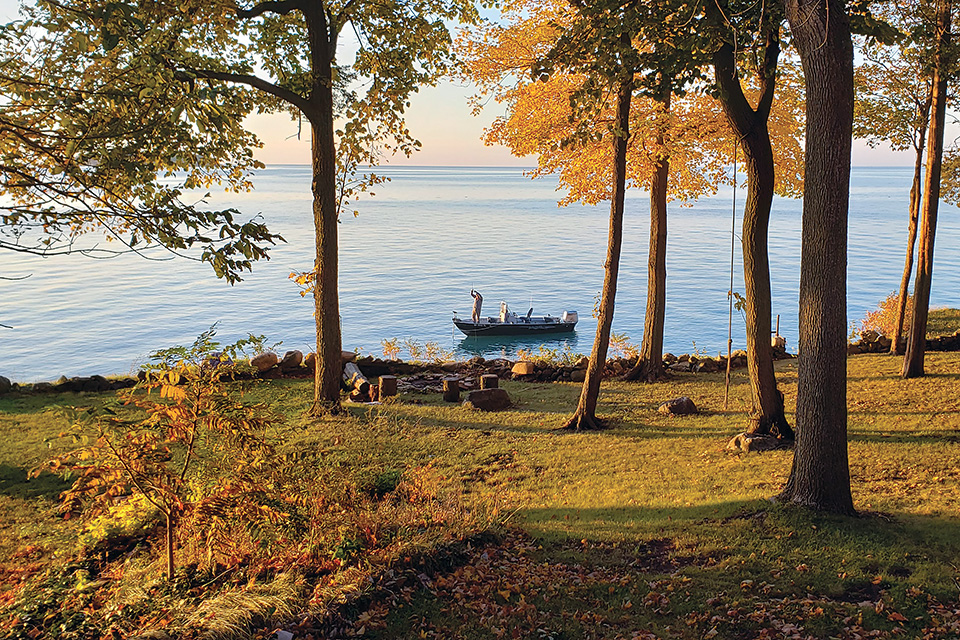 South Bass Island, Ottawa County
Sudden flashes of inspiration often produce the most fascinating candid shots. It was just such a moment that Nathan Cooper of Millbury quickly took advantage of when he saw a fisherman floating by his family’s summer cottage on the westernmost end of South Bass Island. “I was just outside sitting on our deck, and this guy was fishing in this little boat,” Cooper recalls. “I was inspired ... by the great evening lighting in the fall along with the fishing boat.” Instagram: @krambman 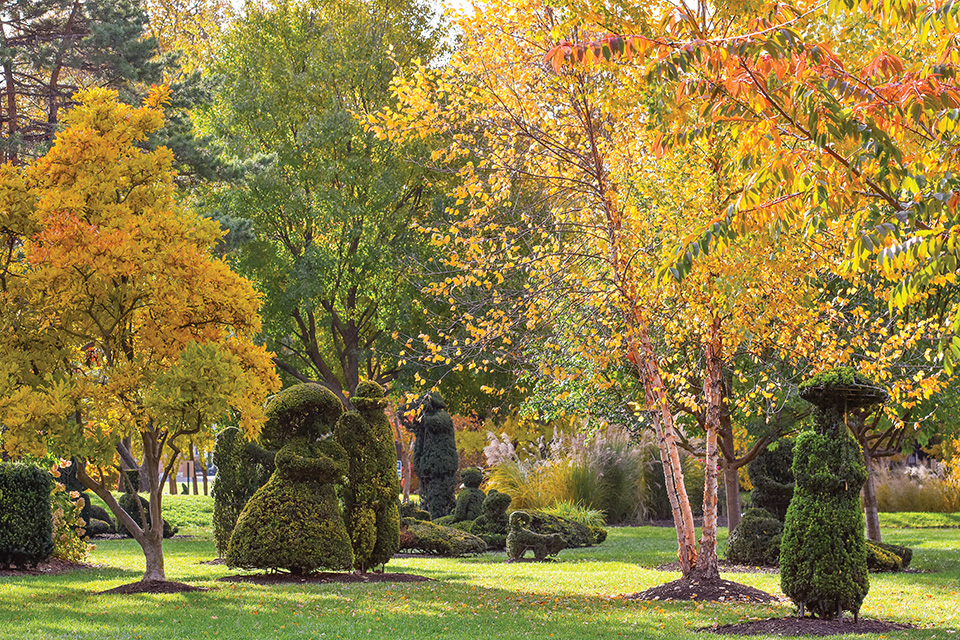 Topiary Garden, Columbus
Designed to look like post-impressionist painter Georges Seurat’s “A Sunday Afternoon on the Island of La Grande Jatte,” Columbus’ Topiary Garden has drawn photographer Randall Schieber since it opened in 1992. He has photographed the park in all seasons, adding that he probably has more photos of this spot than any other. “It’s amazing that I can still go down there, because it’s not a big park, but I can still find an interesting view or interesting light,” Schieber says. He adds that he likes this image of the park because the fall leaves have a subtle color palette and complement the topiaries. Instagram: @rlschieber3 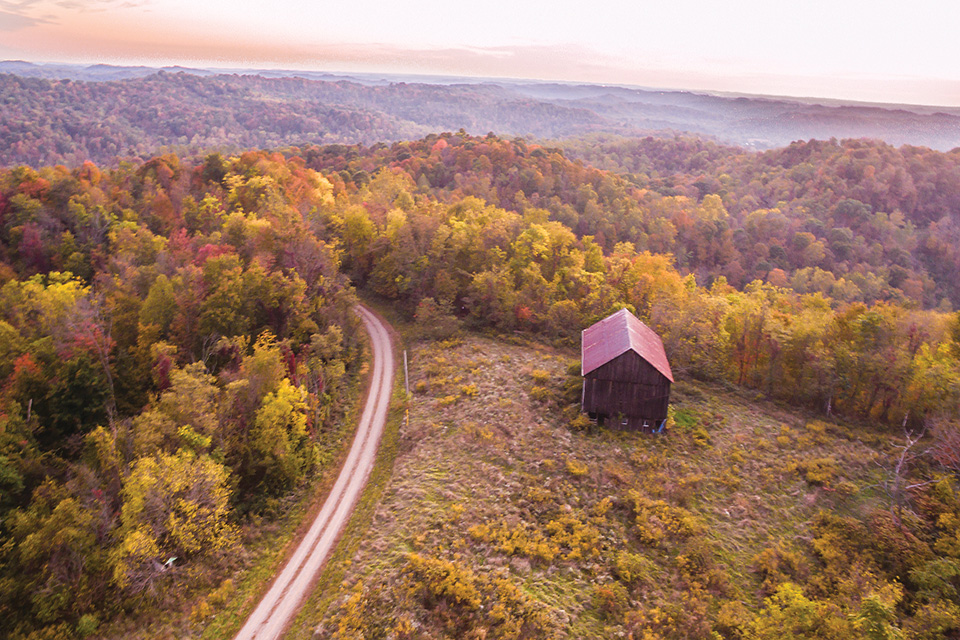 Wayne National Forest, Washington County
Washington County resident and photographer Bruce Wunderlich was driving through Wayne National Forest north of Marietta, along a narrow country lane off Archers Fork Road, when he stumbled upon this rustic wooden barn. So, he returned that autumn knowing the spot would be the perfect place for creating images of the fall foliage, using a drone to gain his sky-high view. “[The picture] is very typical of what Wayne National Forest looks like,” he says. “The mountains, the hills, the countryside. It’s on a road anyone can drive on, and it’s a spot I’d like to go back to again.” Instagram: @bruce_wunderlich