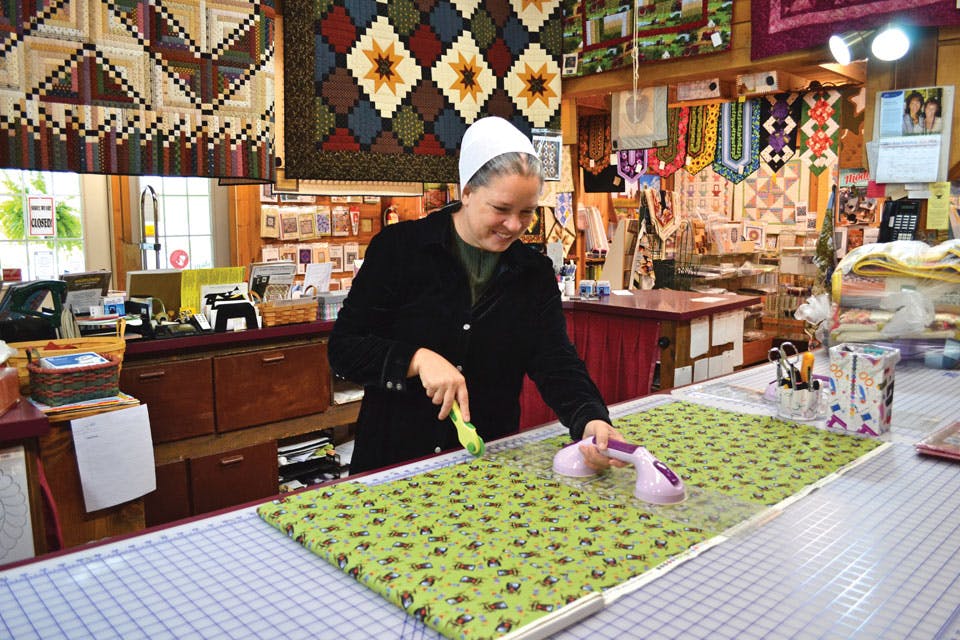 From quilts to dolls to rugs, Ohio’s Amish Country is home to beautiful cloth- and textile-based works.

Day-trippers crowd the aisles at Gramma Fannie’s Quilt Barn in Millersburg. They eagerly peruse the 2,000 bolts of cotton fabric in stock, searching for patterns that beg to be transformed. Sedate Civil War-era prints replete with tea roses line the shelves alongside cloth patterned in prairie colors of russet and wheat.

The volume of visitors increases, along with the chatter, as the day progresses. But the hubbub doesn’t faze Rosie Miller, 52, and her sister, Carol, 40. When the siblings, who follow the New Order Amish way of life, are not offering customers friendly advice, they stand quietly behind the counter measuring, then cutting, the latest batch of cotton material they’ll piece together to make the quilts for which they’re known.

“Most any fabric is nice if it’s used in the right way,” Rosie explains. “But for quilts we make to sell here, we choose colors we would choose for ourselves.”

She prefers serene hues of navy and mauve. Carol, on the other hand, is drawn to jewel tones of purple and deep raspberry. The siblings painstakingly piece, pin and hand-stitch layer upon layer of squares, rectangles, triangles and circles together to create traditional patterns that evoke flying geese, stars, log cabins and other designs that have spanned generations of quilt makers. Each sister estimates she makes 40 to 50 quilts a year, from twin to king-size. Prices range from $550 to $1,200. Sometimes, the women work as a team. Other times, they pursue their own projects.

“Rosie and Carol are perfectionists,” says Jo Ann Hershberger, owner of Schrock’s Amish Farm & Village, where Gramma Fannie’s is located. “The corners on everything they make fit together perfectly, and the stitches are all the same. That’s why people come here. They know the quilts will be done the best way they can be.”

The siblings take Hershberger’s compliments with shy smiles, as if they wonder what all the fuss is about. To them, making a quilt is as natural as breathing.

“Sewing satisfies an artistic need that I have,” Rosie explains. “If I don’t get sewing done during the day, I’d give up sleep to do some.”

“And trust me, she does,” Carol good-naturedly affirms. “I’ve told her more than once that I think it’s time she stopped for the evening.”

The oldest and youngest in a family of eight children, the siblings were taught how to quilt by their mother, Lydiann. Like many Old Order Amish groups, they have an eighth-grade education; travel by horse and buggy; wear plain caps and clothing; and often speak in the Pennsylvania German dialect. The basic difference is the religious doctrines they ascribe to.

“The New Order is purely faith-based and gives our youth something constructive to do with their time that’s edifying and builds up their lives,” Carol explains. “We do not believe in rumspringa [the rite of passage in which Amish teens leave their communities to experience the world before deciding whether or not to return to the fold] ... Instead, we go from following the standards our parents set to making our own decision to become a church member, then follow the same standards we were raised with.”

Although their lives may seem staid to outsiders, the sisters’ flair for design never stops evolving. An avid wildflower hobbyist, Rosie often spends her free time searching for flora native to Ohio, which she sketches for quilt designs. Carol says she enjoys nothing more than educating customers about new fabrics on the market.

“I hope visitors who come here can see that it is indeed possible to have a joyful, fulfilled life without having televisions, radios, cell phones and all of the so-called necessities that we are perfectly happy and content without,” Carol says. 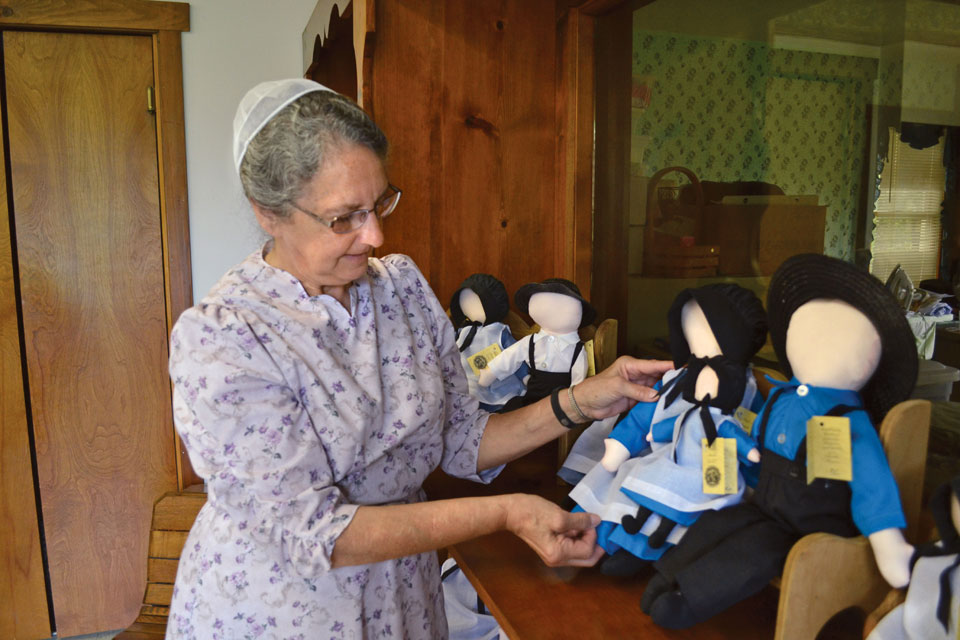 Their faces are void of expression. But that doesn’t mean the rag dolls Ruth Wile makes in her home aren’t loaded with personality. Each is dressed in their Sunday best. The boys sport black pants, suspenders and white shirts, with straw hats placed jauntily atop their heads. The girls are demurely outfitted in black bonnets, solid-colored dresses and white aprons.

For 30 years, Wile has fashioned dolls replicating the faceless Amish ones that were popular more than a century ago. Parents and grandparents praise them for their simplicity. Collectors prize them as folk art.

“Although many Amish families consider dolls to be just toys, there was a time when that wasn’t so,” explains Wile, who lives in Winesburg. “For centuries, children were forbidden to play with dolls that had expressions on their faces. To do so was considered a violation of the biblical creed cautioning against making graven images.”

Wile, 61, respects the importance of religious principles. A Conservative Mennonite, she dresses in traditional prayer cap and frock and fervently follows the doctrine that preaches salvation through Christ’s blood. But followers of her way of life do drive cars, use electricity and computers and have telephones. In fact, other branches of the Christian group dress like mainstream America.

“Many people think the Mennonites split from the Amish, but it was really the other way around,” the seamstress says. “They felt we were too liberal.”

Wile and her husband John, also a Conservative, married in 1971 and had four children. John started his own welding business, and Ruth worked in a factory inspecting tubing intended for hospital use. Their life centered on family and community.

But in 1984, the world they knew shattered: John’s enterprise failed, and Ruth was diagnosed with thyroid cancer.

“That year, we had no money,” she recalls. “So I decided to make a doll for my daughter for Christmas. I finished it while I was in the hospital recovering from surgery.

My doctor was determined to buy it for his daughter at any price. The more he asked about the doll, the more determined I became that I would give it to my daughter, which I did.”

Resembling a more exquisitely crafted member of the Cabbage Patch Kid family, the doll’s appeal served as the catalyst for a new business venture. While on the mend from cancer treatment, Wile visited several gift boutiques in nearby Berlin, asking owners if they’d be interested in purchasing handcrafted dolls she could make that would be similar to the one she gave her daughter. When it was deemed that production costs would far outweigh profit, plainer Amish dolls became the obvious alternative.

Following patterns she designed herself, Wile — assisted by her daughter, Brenda Miller — cuts 16 to 32 layers of cotton material at a time, enough to make attire for 32 dolls. The duo then assembles the clothes on a Bernina sewing machine. It’s a meticulous process that can take more than 100 hours to complete.

“Some people have the idea that when you’re sewing doll clothes, it’s no big deal if the measurement is not exact,” Wile says. “An eighth of an inch off is like being half an inch off on an adult size.”

After the duo finishes the clothes, they stuff 12 to 20 pounds of polyester filling into each of the 32 nine-piece cotton doll bodies Wile has prepared. Once the dolls are sewn together, the final step is dressing them. Although it sounds simple, it can be a challenge.

“Bows have to be crisp, not limp,” she says. “Sometimes, it takes us two or three attempts to get it right.”

At one time, Wile created 5,000 dolls a year. But bouts of rheumatoid arthritis have scaled that number to fewer than 1,000. They are available in four sizes ranging from 9 to 18 inches tall, and each is hand-signed and named after a friend or family member. The seamstress sells them exclusively at her shop, which is next to the Amish Country Campsites business that she and John own and operate. Prices range from $19.95 to $39.95.

“I’m so grateful that people enjoy my work,” Wile says, marveling at the fact that her creations have been sent to Japan, Australia, Switzerland, Germany, Argentina and Iraq. “These dolls have become part of my life. I love to see them go off to good homes.” 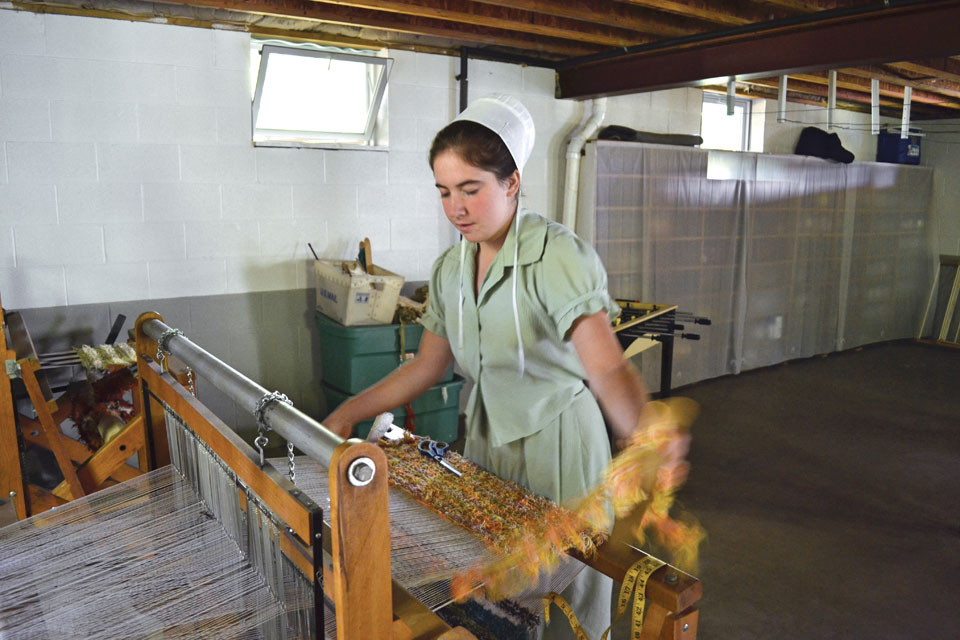 A semi rumbles up the driveway to Kathy and Leroy Millers’ 14-acre homestead in Middlefield. But the 1,200-pound bundle the truck driver deposits in the shed next to the family buggy isn’t a bale of hay intended for their horse.

Instead, the hefty parcel contains material that the couple buys from a company in Michigan. Over the next 12 months, Kathy, 38, and her 18-year-old daughter, Regina, will weave it into rag rugs that promise to add flair to any decor.

Usually made from discarded blankets, jeans and shirts, traditional rag rugs are often one-dimensional in appearance. But the Millers create theirs with selvedge fringe — the long bands of polyester, cotton and rayon that remain after the rest of the cloth has been fashioned into upholstery, drapes or bedspreads. The resulting textures range from nubby to shaggy to velvety.

“From the minute I saw Kathy’s rugs, I knew I had to have them in my store,” says Terese Volkmann, owner of Lilac Garden Gift Shop in Burton, recalling the day six years ago when the Millers arrived at her door asking if she’d be interested in selling their hand-loomed wares.

Since then, Volkmann has become the exclusive distributor of the rugs, which she says practically sell themselves. Each rug is 27 inches wide and available in lengths of 30 inches, 44 inches and 72 inches. Prices range from $35 to $90.

“[Their] eye for color is exquisite,” the shopkeeper says. “Since these are made from a variety of materials, the feel is like nothing else you’ll find.”

Kathy heralds each new bale with eager anticipation. “It’s always exciting because you never know what shades you’re going to get,” she says.

After sorting colors according to palette in their spare time, mother and daughter stand in front of the wooden loom that’s been in the family for more than a century and begin weaving. Each of the 350 rugs the pair makes each year takes around 45 minutes to complete.

Since the loom is operated by hand and foot, the weave can be adjusted according to the thickness of the material.

“Which means,” Volkmann says, “that the rugs wear like iron.”

As members of the Old Order Amish, the Millers do not use electricity. Instead, they rely on gas-powered lanterns and battery-powered LED lights. And, like many Amish youth, Kathy explored the outside world by participating in rumspringa at age 17. But she says there was never any doubt that she would return to her roots.

“The things I experienced then didn’t mean much to me,” the mother of eight says quietly. “Family and faith are my life.”