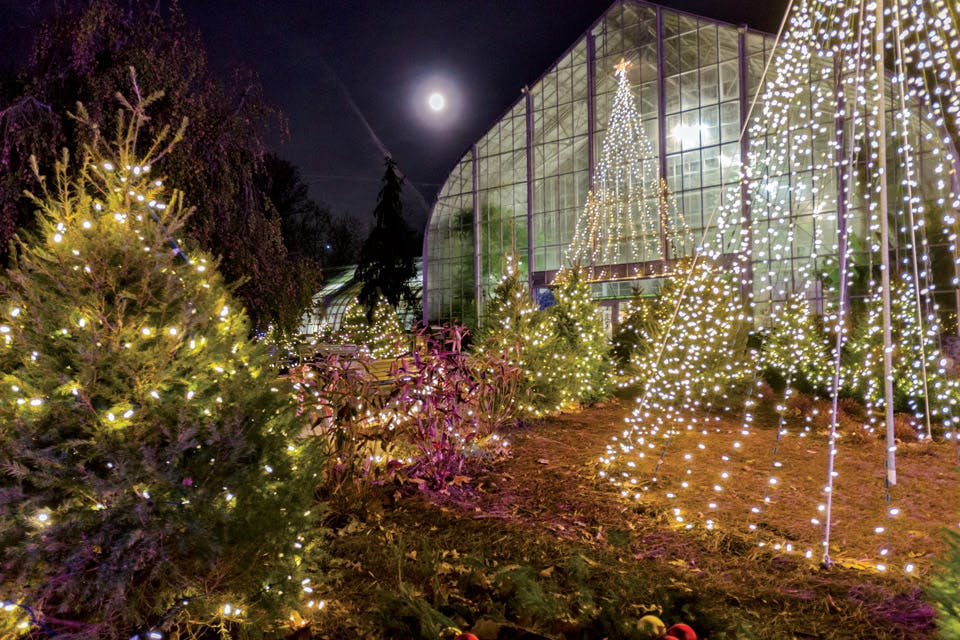 The Krohn Conservatory’s annual event returns with thousands of flowers and naturally created depictions of some of the city’s most famous architecture.

As fall fades to winter each year, Cincinnati’s Krohn Conservatory bursts with lush flower displays featuring more than 3,000 varieties of poinsettias, evergreens, cyclamen and coleus, with a model train display weaving through them.

The show, which opens Nov. 18, features the city’s iconic architecture, as replicas of historic and notable structures peek out from among the floral displays. But it’s the materials that go into each that make them extra special.

“It’s called ‘botanical architecture,’ ” says Andrea Schepmann, director of Krohn Conservatory. “Everything is made of something natural, or something plant-based.”

Visitors can follow garden-railway-sized train cars as they journey over trestles made of grapevines and willow, and enjoy re-creations of Cincinnati landmarks such as the Union Terminal and the Roebling Suspension Bridge.

“The amazing thing about the botanical architecture is that when you look at different structures, you don’t even realize that might be a pinecone or half a gourd on top,” says Schepmann. “Not only are they all natural materials, but they are so correct in their architectural rendering that it’s just amazing.”

The event has become a tradition that brings families back year after year to see the changing displays and the traditional Nativity scene. Nov. 27 brings the unveiling of the holiday tree adorned with ornaments made by Krohn Crafters, a small group of nearly two dozen volunteers who meet throughout the year to create ornaments made of pinecones, twigs and nuts.

“We find a lot of folks want to come and stage family photos in and among the thousands of poinsettias,” says Schepmann. “It’s nice to become a part of their family memory.”