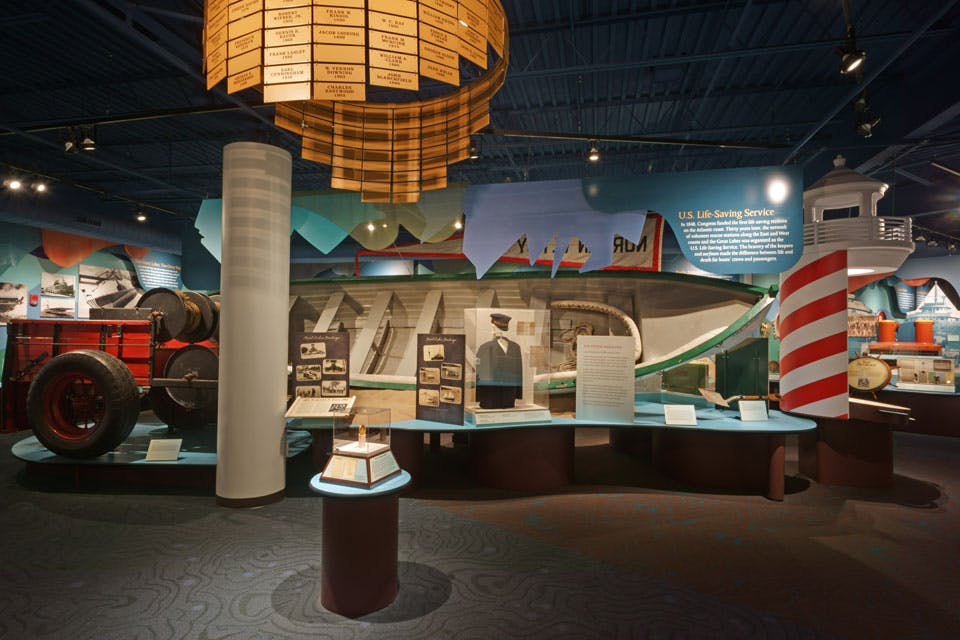 From shipwrecks to industrialization, the National Museum of the Great Lakes tells the story of our inland seas.

It’s easy to lose sight of how dangerous the Great Lakes can be. From a cottage at Geneva-on-the-Lake or during a day trip to Put-in-Bay, Lake Erie is fun, even tranquil at times. But the Great Lakes also conceal thousands of stories. If you spread out all of the shipwrecks that have occurred on them over the past 250 years, they’d average one every 11 days.

That danger is one of the overarching themes at the National Museum of the Great Lakes. A 75-pound bell from the Cortland and actual wreckage from other ships are displayed alongside a life raft that didn’t save anyone from the Great Lakes’ most famous sinking, the Edmund Fitzgerald. There are also pieces related to disaster prevention and recovery, including artifacts from the U.S. Life-Saving Service, a 19th-century precursor to the U.S. Coast Guard.

“We want people to get an idea of the enormity of the Great Lakes and their history, and that’s one way of [exploring it],” says Chris Gillcrist, executive director of the National Museum of the Great Lakes. “I joke that the Bermuda Triangle’s got nothing on the Great Lakes. There are ships we’ve lost that we don’t know how they sank, and we can’t find them.”

But the story told at the National Museum of the Great Lakes is also one of life — from plants and animals to the people who earned their living on the water. When the Toledo museum opened along the Maumee River in 2014, its name was intended to make a statement about the scope of the institution’s focus. For years, the Great Lakes Historical Society had run the smaller Inland Seas Maritime Museum in Vermilion, but that attraction needed more space and a bigger vision.

“We didn’t put the word ‘maritime’ in the name of the new museum,” Gillcrist says. “It’s not just a museum of boats.”

Covering roughly 10,500 square feet of exhibit space (triple the size of its previous incarnation), the National Museum of the Great Lakes has more than 250 artifacts on display — from tools used aboard ships to samples of the industrial materials hauled by freighters — that trace the history of the Great Lakes and the birth of the Industrial Revolution.

“It’s utterly fascinating,” says Carrie Sowden, the museum’s archaeological director. “Someone might think, Oh, I have no connection to the Great Lakes, but they really do. … They just don’t know it.”

When French explorers saw the Great Lakes for the first time, they called them “les mers douces” — the sweet seas. What they couldn’t have known at the time was how harshly unforgiving these waters can be. Because of sudden weather changes, Gillcrist says the Great Lakes are home to more shipwrecks per surface square mile than any other body of water in the world.

“Our weather here is so unusual, and it can be freakish,” Sowden adds. “On Lake Erie, you can get 10-foot waves that come up in three hours, and three hours is not enough time to go hide in a port if you’re sitting out in the middle of the lake.” 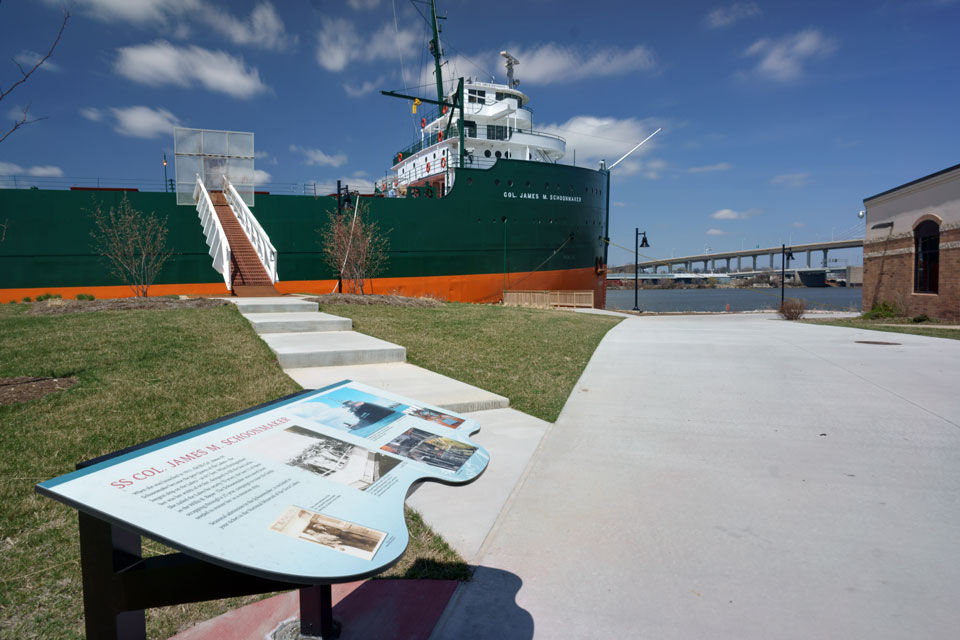 The SS Col. James M. Schoonmaker freighter was christened in 1911 and spent decades on the Great Lakes. Today, it's moored next to the museum and is open to visitors May through October. (photo by David Fox, Hilferty and Assoc.)

Although thousands of ships met their end on the Great Lakes, the most famous to do so was the Edmund Fitzgerald, a freighter that fell victim to a Lake Superior storm on Nov. 10, 1975, with all 29 crew members on board. Musician Gordon Lightfoot memorialized the ship’s sinking in song and Cleveland’s Great Lakes Brewing Co. named a beer after it. Although most people in Ohio at least recognize the ship’s name, many do not know all the details surrounding its final voyage.

Gillcrist says one of the reasons the Great Lakes haven’t seen a shipwreck of that magnitude since 1975 is the advent of global positioning systems, which can determine a ship’s location within about 10 feet.

“The home office knew it was in Lake Superior, but didn’t know where,” Gillcrist says when discussing the sinking of the Edmund Fitzgerald. He adds that an aircraft discovered it four days after it disappeared.

Another reason for the decrease in shipwrecks is that there are simply fewer ships on the Great Lakes today, and those that do travel the waters are much larger than they were 40 years ago. The Edmund Fitzgerald was 729 feet long and could carry 26,000 tons, while today’s ships are longer than 1,000 feet and can carry up to 72,000 tons, according to Gillcrist.

Artifacts from the Edmund Fitzgerald on display at the National Museum of the Great Lakes include the life raft and life buoy found on Lake Superior following the ship’s sinking. The famous freighter is also the subject of the first documentary produced by the museum, which is shown twice a day Wednesday through Saturday and bears a title borrowed from maritime law cases of the 1900s: “A Good Ship and Crew Well Seasoned.”

Stretching 618 feet, the SS Col. James M. Schoonmaker is a small boat by today’s standards. But when it was christened in 1911, it was the largest bulk freighter in the world. Today, it’s moored next to the National Museum of the Great Lakes and welcomes visitors to step aboard for a closer look at a time-tested workhorse.

The Schoonmaker sailed throughout the Great Lakes, but its most traveled route was bringing iron pellets from the Upper Peninsula of Michigan or Minnesota’s Mesabi Range to ports in Toledo, Cleveland or Ashtabula. The ship would then return north filled with coal mined in West Virginia, Kentucky and Ohio. It made thousands of those trips — first for the Shenango Furnace Co., and then Cleveland-Cliffs — before it was effectively retired in 1980. 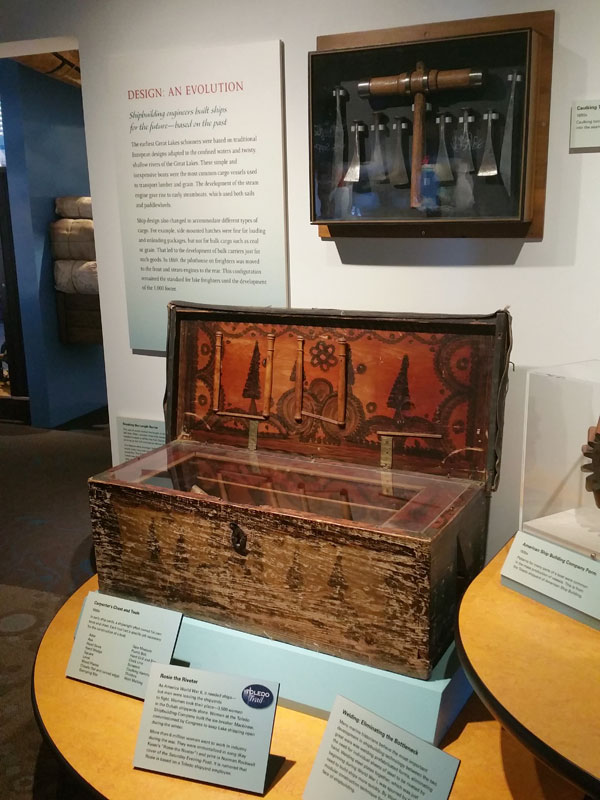 Standing in one of the cargo holds, the ship’s enormity is obvious, yet it seems small when one realizes that around 30 people lived and worked here for nine or 10 months at a stretch, manning bilge pumps, cooking meals or shoveling coal.

“Mineral resources around the Great Lakes made the Industrial Revolution possible,” Gillcrist says. “The Great Lakes have dramatically impacted our continent’s development in the last 300 years. If you look at textbooks, that story isn’t being told.”