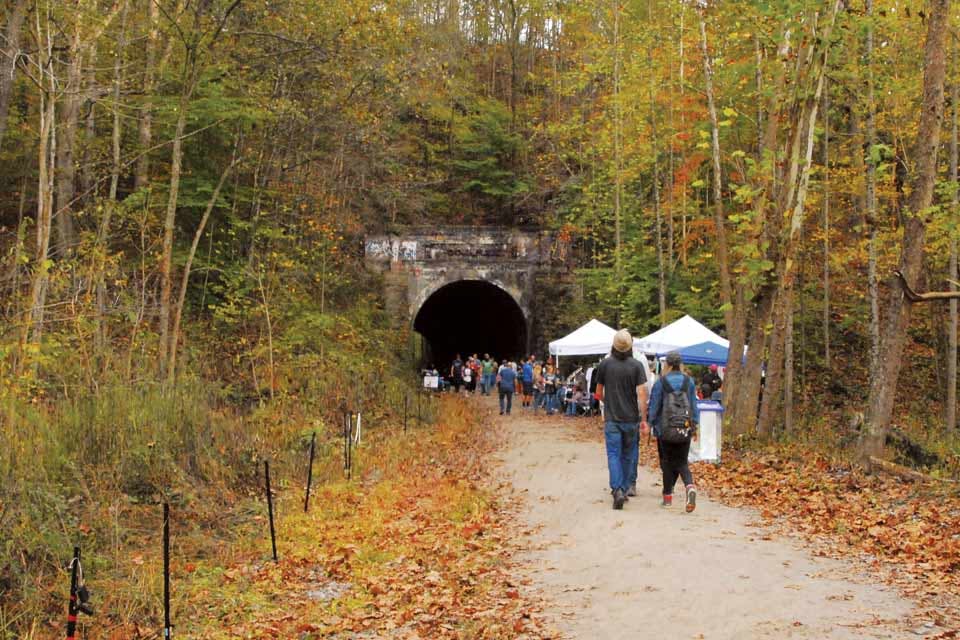 In Ohio’s least populated county, trees cover a vast majority of the hills and valleys, making for great fall fun once the leaves begin to turn.

Some people feel a chill. Others see a lantern swinging in the dark. Ghostly figures have even been said to appear in photographs. The story goes that such unexplained phenomenon could be the apparitions of train engineer Frank Lawhead or fireman Charles Kreich, the men who died when two freight trains collided head-on near Vinton County’s Moonville Tunnel in November 1880.

Lawhead was on one train, while Kreich was on the other. The dispatcher’s failure to notify the eastbound train of the westbound train’s schedule set up a tragic outcome in this wooded and secluded stretch of southeast Ohio’s Appalachian country.

Moonville was never a booming town. Even during its heyday in the 1870s, the village topped just more than 100 residents, but the brick train tunnel bearing the town’s name, a few sandstone foundations and a tiny pioneer cemetery remain to this day.

“Moonville Tunnel attracts a variety of individuals, from history buffs to paranormal researchers,” says Caleb Appleman, marketing director for the Vinton County Convention & Visitors Bureau. “Visitors frequently ask if I’ve ever seen a ghost there. I can only say that strange things do seem to occur, and it’s probably best if you experience them for yourself.”

The annual Midnight at Moonville festival (set this year for Oct. 13 from 3 to 11 p.m.) brings more than 2,000 people to the tunnel. The day is full of family-friendly fun, including spooky wagon rides, storytellers, craft and food vendors, and acoustic music by country and bluegrass bands. The event culminates with a paranormal research investigation that uses an electronic voice phenomenon device to pick up supernatural sounds.

A new bridge built across Raccoon Creek makes accessing Moonville Tunnel easier than ever. There are also shuttles that take visitors from the parking area to the bridge. Parking is $5, but the event is free. Just don’t forget to bring a flashlight. State Route 278 off Wheelabout Road; parking at 71945 Shea Rd., McArthur 45651, vintoncountytravel.com 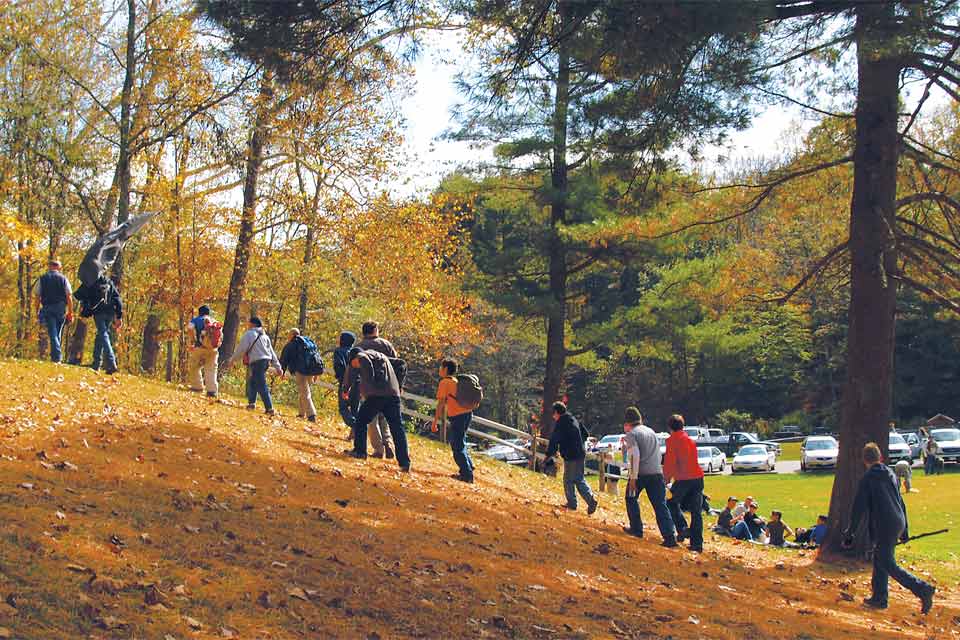 From 1854 to 1875, Hope Furnace roared with iron production and the nearby town of the same name had a train station, school and a handful of houses. By the time the lake the area is known for today was created during the 1930s, most residents had moved away.

Throughout the year, Lake Hope State Park brings people back for the rugged beauty of the area’s waters, gorges and woods, including the surrounding Zaleski State Forest. In the fall, sugar maple, hickory and oak trees are a feast of yellows, reds and oranges.

“Everyone loves the fall season,” says Lori Grupenhof, the park’s assistant manager, who works with fellow staffers to showcase Lake Hope each autumn.

The annual Lake Hope Fall Hike (scheduled this year for Oct. 20, from 10 a.m. to 2 p.m., with the last group departing at 10:30 a.m.) offers a 3.2-mile trek from the shelter house to the historic Hope Furnace. Trail leaders accompany each small group and teach about the flora, fauna and history of the area.

“Although it’s a little over 3 miles, it’s not difficult,” says Grupenhof, adding that the hike is not good for small children because it moves at the pace of an adult’s gait.

Once hikers reach Hope Furnace, they enjoy a hearty homemade bean soup cooked over an open fire and cornbread. Afterward, a shuttle takes them back to the shelter house

During R.O.A.R. Day (set for Oct. 27 from 10 a.m. to 4 p.m.), Lake Hope hosts a celebration that combines the area’s Appalachian cultural and natural heritage with Halloween fun.

Basket weavers, soap-makers, wood carvers and more demonstrate their craftsmanship and sell their wares, and apple cider is made with an old-fashioned cider press. Halloween-inspired activities include pumpkin tossing, pumpkin painting and a costume contest. During the day, the nature center, the lodge and the one-room schoolhouse — the only remaining building of the town of Hope — host activities. 27311 St. Rte. 278, McArthur 45651, 740/596-3030, parks.ohiodnr.gov/lakehope 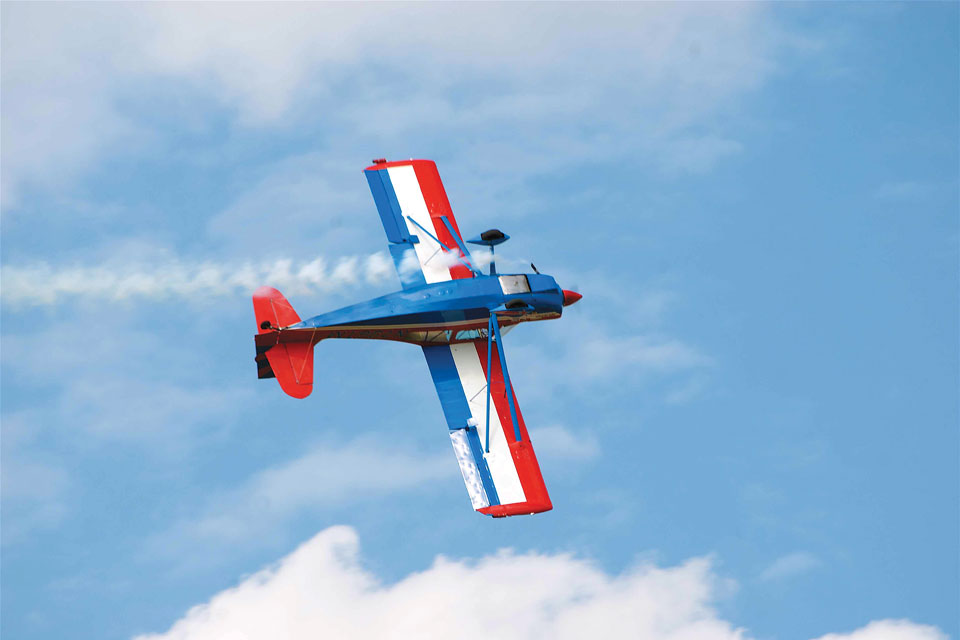 Each year, at the start of the Vinton County Air Show (set this year for Sept. 16 from 11 a.m. to 5 p.m.), Bob Church jumps from a small airplane that buzzes above the crowd, kicking off Ohio’s largest free air show.

That catching up among pilots happens in between acrobatic flying acts, remote-control airplane demonstrations and displays by small planes with names like Red Thunder.

The barbecue chicken dinners cooked up on a grill are another air show draw. Parking donations help keep the small airport operating, and airplane rides are available after the show for a fee.

Lake Alma State Park, which is located about 15 miles from the airport, was home to a privately owned amusement park with a dance pavilion, bowling alley and a carousel in 1903. These days, hiking trails, campsites and the quiet beauty of the 60-acre lake and surrounding hills are the main draw.

During this year’s annual Halloween campout (set for Oct. 19 through 21) the quiet gives way to fall-themed fun with a few spooky scares thrown in. The pumpkin-decorating and costume contests are aimed at kids, but adult ingenuity turns campsites into ghostly glee. Over the years, inflatable witches, skeletons and jack–o’-lanterns have greeted trick-or-treaters and hayride participants. Awards are given each year for the best decorations, and the competition is fierce.

“In the past, people have decorated their campsite like a graveyard with a coffin where a person pops out,” says Jamie Phillips, natural resources technician for Lake Alma State Park. “During the hayride, some people dress up in costumes and come out of the woods to scare people.”