These Ohio institutions share insight and inspiration as they showcase stories and artwork that highlight the African American experience.

“Memories and Inspiration: The Kerry and C. Betty Davis Collection of African American Art” is the story of a couple who spent more than 30 years collecting vivid and interesting art that emphasized representation of the Black image. From Feb. 4 through May 14, Cincinnati’s Taft Museum of Art features around 60 works from the collection.

“[It] is inspiring because it is an incredible collection of African American art,” says Tamera Lenz Muente, curator of the Taft Museum of Art. “Visitors to the Taft are going to see artists that they probably know about like Jacob Lawrence and Romare Bearden, but they’re going to learn about a lot of artists that they may have never heard about and see the amazing accomplishments of these artists who have not been represented as well as they should have over the decades in museums.”

Kerry Davis, a retired mailman, and C. Betty Davis, a former television news producer, felt it was essential to showcase a wide range of Black artists to serve as inspiration. When Kerry began purchasing art, he and Betty had no idea how significant their collection would become. As the couple invited friends, family and members of the community to their home to enjoy the artwork, people would often remark that it was unlike anything they had ever seen. Kerry says that many African Americans were not inclined to visit art museums because they didn’t see themselves there.

“For so long you walk into a museum, and you see a lot of European stuff. It’s good, but it doesn’t grab you because it doesn’t tell your story,” he says. “So, when your children go in and they go left and right, you can’t blame them. You have to give them something that they can recognize, and that’s what we hope to do.” 316 Pike St., Cincinnati 45202, 513/241-0343, taftmuseum.org

National Underground Railroad Freedom Center | Cincinnati
The exhibition “ ‘Free as they want to be’: Artists Committed to Memory” tells powerful stories through photography and video.

The photograph of Malcolm X’s FBI files in the National Underground Railroad Freedom Center’s “ ‘Free as they want to be’: Artists Committed to Memory” exhibition appears minimalist at first glance, but it speaks volumes. It’s just two white boxes on a black background, but photographer Wendel A. White seems to invite the viewer to focus on the weight of what’s inside.

“It’s kind of mind blowing that here’s this figure in American history, knowing his history and personal life, and then here are two microfilm carriage reels of FBI files on him,” says Stephanie Lampkin, the Cincinnati museum’s curator. “It kind of focuses your attention.”

The image is one of 15 by White in the exhibition, which runs through March 5 and features nearly 100 works by more than 20 artists. Co-curated by Deborah Willis of the Tisch School of the Arts, New York University, and Cheryl Finley of the Atlanta University Center Art History and Curatorial Studies Collective, the exhibition features historical and contemporary photographs, films, projections and mixed media that aim to capture the legacy of slavery and the struggle for racial and social justice, while also depicting what it means to be free.

“It really looks at photography and film as mediums for essentially allowing artists to express their desire to be as free as they want,” says Lampkin, who notes that the phrase in the exhibition’s title comes from celebrated Black writer James Baldwin.

Dawoud Bey’s shadowy photos of outdoor scenes let the viewer imagine what it might have been like to be someone seeking freedom under the cover of darkness. Adama Delphine Fawundu’s “In the Face of History” series sees the artist superimpose an image of herself over historical documents, such as the act of Congress stating that Harriet Tubman’s pension for her services as a nurse during the Civil War would be increased.

Another series of photos in the exhibition, “One More River to Cross” by Daesha Devón Harris captures underwater images of people’s legs as they run through water, which feels poignant displayed in the National Underground Railroad Freedom Center due to its location along the Ohio River, once a key boundary for freedom seekers.

“Her pieces really resonate with the environmental features that [the museum] is surrounded by,” says Lampkin, who notes there’s also a video that accompanies the images. “In the film, you can hear the sloshing of the water and the shifting and movement of the pebbles in the water. It just adds that extra element of realism to the experience.” 50 E. Freedom Way, Cincinnati 45202, 513/333-7500, freedomcenter.org 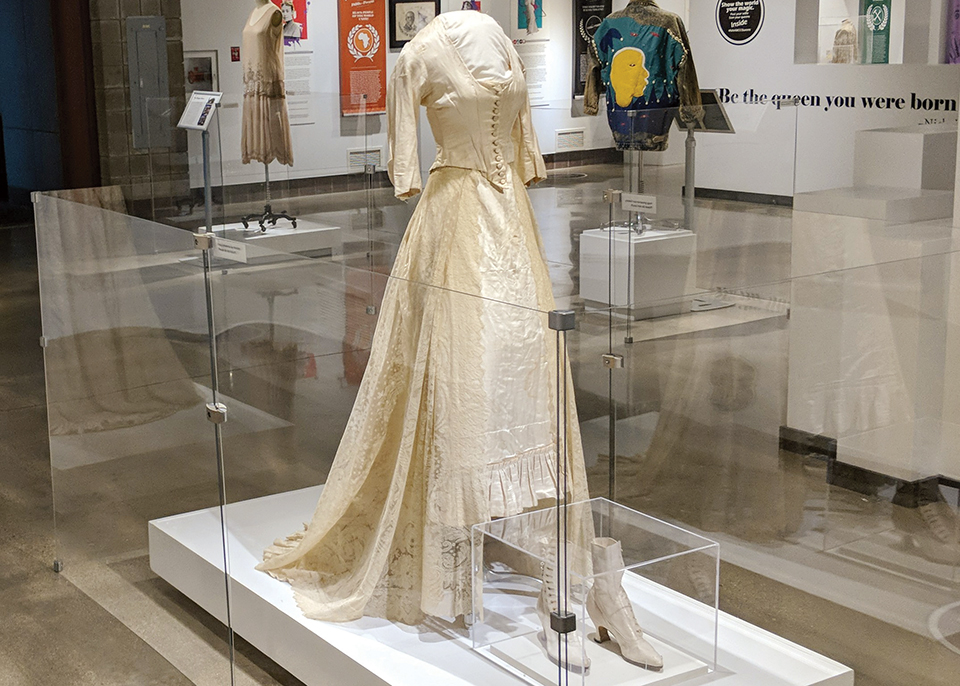 The National Afro-American Museum & Cultural Center first opened to the public in 1988, but its beginnings stretch back to the early 1970s. The idea for the museum was born at the end of the Black Power Movement. During that time, there were some museums dedicated to local African American stories and histories, but there was no national museum highlighting African Americans. The state of Ohio helped generate the funding needed to bring such an institution to fruition.

The National Afro-American Museum & Cultural Center has an extensive collection that includes over 9,000 artifacts and pieces of artwork, 700 linear feet of manuscript collections and thousands of photographs. Exhibits at the center share many of those items with visitors.

“One thing that we do pride ourselves in is the fact that the vast majority of what you’re going to see is going to be artifacts and other material that is part of our permanent collection,” says Charles Wash Jr., director of the National Afro-American Museum & Cultural Center. “We rarely borrow material from other organizations because we have so much right there on-site.”

The permanent collection features African American protest art of the late 1960s, an Alex Haley collection that features the author’s typewriter and his final draft of Roots: The Saga of an American Family, a collection dedicated to Col. Charles Young (who was posthumously promoted to brigadier general in 2021) and much more. The museum also holds the archival collection of Anna Arnold Hedgeman, the only woman on the executive committee that planned the 1963 March on Washington, where Martin Luther King Jr. delivered his “I Have a Dream” speech.

“Behind the Mask: Black Power in Comics,” currently on display at the center, tells the story of the rise of Black comic book creators during the 1950s, ’60s and ’70s, and how they used the artform to create superheroes that reflect the Black experience.

“A lot of people don’t realize how old some of the comic book characters are,” Wash says, pointing to the fact that Black Panther first appeared in 1966. “We have some of the original material on display.” 1350 Brush Row Rd., Wilberforce 45384, 937/376-4944, ohiohistory.org/naamcc