From haunted sites to fields of glory, our checklist offers destinations to keep an eye out for when you’re on the road.

King-Size Creations
Ohio’s collection of castles reflects our ongoing fascination with the Europe of centuries ago.

Landoll’s Mohican Castle: Inspired by the castles of Germany, the Landoll family began construction on this property in 1996. Welcoming its first guests in 2002, the resort features 17 suites outfitted with flat-screen TVs and Jacuzzi tubs. 561 Twp. Rd. 3352, Loudonville 44842, 419/994-3427, landollsmohicancastle.com

Loveland Castle: Harry Andrews embraced the romance of the medieval age when he began building his Chateau Laroche in 1929. German, French and English influences are evident in the stone structure that has four towers. Today known as the Historical Loveland Castle & Museum, the property is a place to learn about knights, view period weaponry and picnic in the gardens. 12025 Shore Rd., Loveland 45140, 513/683-4686, lovelandcastle.com

Piatt Castles: Abram Piatt built Mac-A-Cheek castle in 1871, and his brother Donn Piatt finished the nearby Mac-O-Chee castle a decade later. While the interior of Mac-O-Chee reflects the Victorian era in which it was built, Mac-A-Cheek features more modern touches, including the TV that belonged to Abram’s descendants who lived there during the 1950s. Mac-A-Cheek: 10051 Township Rd. 47, West Liberty 43357; Mac-O-Chee: 2319 St. Rte. 287, West Liberty 43357, 937/465-2821, piattcastles.org

The Brumback Library: Built in 1899, this Gothic and Romanesque revival structure was created to look like a castle, but its purpose was to serve as the first county library in the United States. Original marble, brass, tile and oak are found throughout the building, and a 10,000-square-foot addition in 1992 used limestone from the same quarry the original builders did. 215 W. Main St., Van Wert 45891, 419/238-2168, brumbacklib.com

Time Travel
Grab a bite to eat, take a tour or book a stay at one of these historic inns.

Pennsylvania House: Founded by Pennsylvania native David Snively in the 1830s, this inn along the National Road is now a museum offering guided tours. The button collection dates back to the 1700s and spans a wide variety of materials, including ivory, bogwood and glass. 1311 W. Main St., Springfield 45504, 937/322-7668, pennsylvaniahousemuseum.info

The Red Brick Tavern: With prime rib on the weekend and barbecue ribs the first Thursday of every month, this tavern doubles as a Madison County dining destination. The place has been serving guests since 1837 and today stands as the second-oldest stagecoach stop in the state. 1700 Cumberland St., London 43140, 740/852-5254, historicredbricktavern.com

Stockport Mill Inn: This property along the Muskingum River opened as a mill in 1906 before it turned into an inn and restaurant almost a century later. This spot retains its mill identity and offers a home-cooked Sunday buffet. 1995 Broadway St., Stockport 43787, 740/559-2822, stockportmill.com

Sports Centers
Walk in the footsteps of some of the Buckeye State’s most famous athletes.

Ohio Stadium: The Horseshoe is one of the cathedrals of college football, and although this 90-minute tour is a bit pricey, it offers guests the opportunity to get an up-close look at the home of the Ohio State Buckeyes. $100 per person for groups less than 10, two-week notice required; 411 Woody Hayes Dr., Columbus 43210, 614/247-6713, ohiostatebuckeyes.com 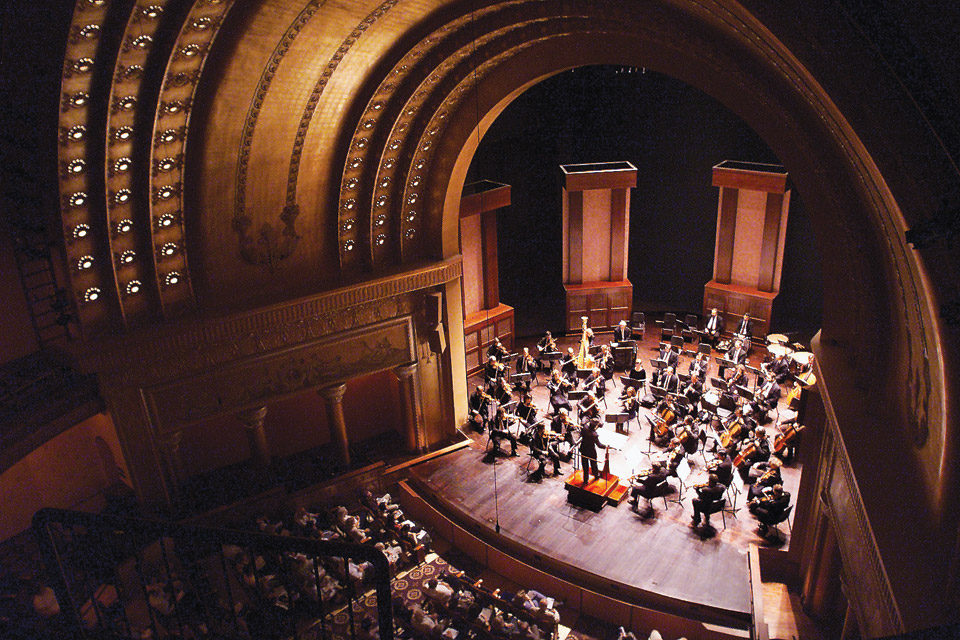 The Southern Theatre in Columbus opened in 1896. It is the oldest surviving theater in central Ohio. (photo by Randall L. Schieber)

Curtain Call
Our state is filled with historic theaters that have played host to countless stage legends.

Southern Theatre: Opened in 1896, this Columbus playhouse is the oldest surviving theater in central Ohio. Ornamental touches include a series of gilded concentric arches in the main house lit with 204 bulbs. The hand-painted murals over the side boxes are likenesses of Shakespeare and Christopher Columbus, the city’s namesake. 21 E. Main St., Columbus 43215, 614/469-1045, capa.com

Playhouse Square: The second-largest performing-arts center in the country attracts more than a million theatergoers each year. Outside, suspended 44 feet in the air, the GE Chandelier sparkles with 4,200 resin crystals, earning a Guinness World Record as the largest outdoor chandelier in the world. 1501 Euclid Ave., Cleveland 44115, 216/241-6000, playhousesquare.org

Twin City Opera House: Since opening in 1892, this Victorian theater has been a stop for country music acts and is the home of the Ohio Valley Opry. It’s also a favorite haunt for paranormal investigators hoping to catch a glimpse of usher Everett Miller, who worked at the theater in the early 1900s. 15 W. Main St., McConnelsville 43756, 740/962-3030, operahouseinc.com

Local Haunts
These stops celebrate ghostly tales and the spirit of days gone by.

Moonville Tunnel: In 1880, Frank Lawhead’s train collided with another near Moonville, claiming the engineer’s life and two others. Sightings of a ghostly man walking with a lantern near the railroad tunnel have been reported for a century. Midnight at Moonville celebrates that haunted heritage each October. Park at Lake Hope State Park, 27331 St. Rte. 278, McArthur 45651, 800/596-4459, vintoncountytravel.com

Olde Town Ghost Tours: Visit the 1816 Dublin cemetery and historic properties in this walking tour for ages 12 and older. Keep an eye out for Pete, a local wandering spirit who is said to often join in for part of the tour. Tours offered May–October, visit website for times; $10; 75 N. High St., Dublin 43017 614/284-6158, oldetownghosttours.com

Punderson Manor: An Ohio State Park lodge since 1956, this home’s roots stretch back to millionaire Karl Long, who started construction on the property during the 1920s only to lose it, along with his fortune, in 1929. Over the years, guests have reported strange happenings. 11755 Kinsman Rd., Newbury Twp. 44065, 440/564-9144, pundersonmanorstateparklodge.com

Ethnic Eats
Dine on cuisines from across the globe without ever leaving Ohio.

Li Wah: This Cleveland dim sum spot is open seven days a week and on weekends invites patrons to choose from a selection of small dishes served from nine carts that circle the room. Li Wah offers 10 varieties of dim sum, including its signature homemade steamed or fried dumplings. 2999 Payne Ave., Cleveland 44114, 216/696-6556, liwahrestaurant.com

San Marcos Restaurant: Make your way through the Mexican market stocked with products you won’t find in your usual grocery store before taking a seat at this Toledo restaurant that has been dishing out fresh and authentic Mexican cuisine since 2009. The colorful walls and painted chairs make this spot extra cheery, but the flavorful tacos are the star. 235 Broadway St., Toledo 43604, 419/244-2373, sanmarcosmexicanrestaurants.com

The Buckley House: Located in a circa-1879 Victorian home, chef Emad Al-Masri uses super-fresh, often-local ingredients to create Mediterranean cuisine with influences ranging from northern Italy to Lebanon to Morocco. Seafood and lamb dishes, as well as desserts, are favorites, and up to 10 specials are offered daily. 332 Front St., Marietta 45750, 740/374-4400, bhrestaurant.com