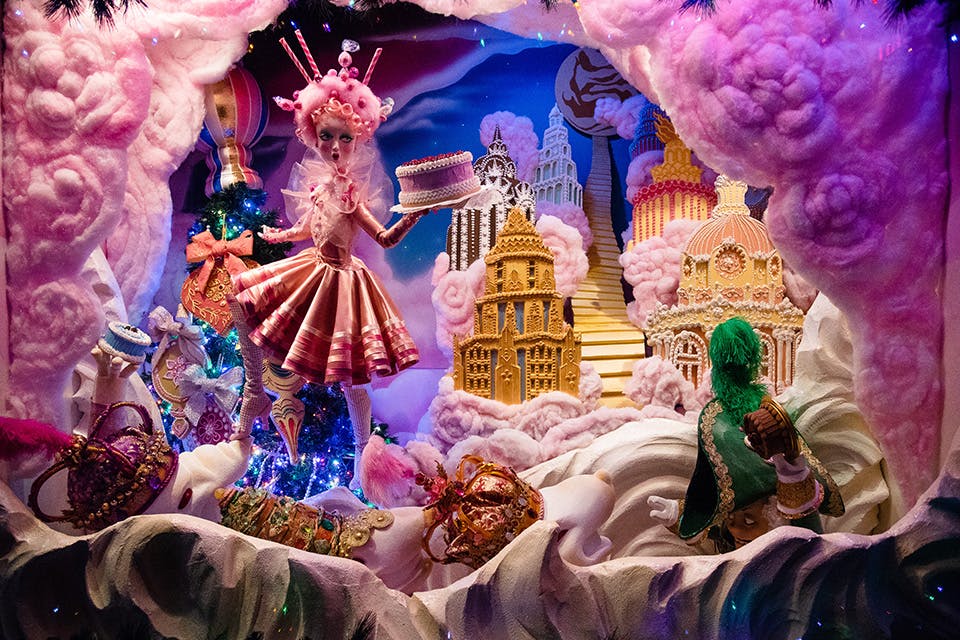 From zoo nights and model trains to Christmas museums and light shows, here is how to make the most of the season.

Castle Noel
Medina | Open year-round
Immerse yourself in a museum filled with memory joggers, Christmas movie memorabilia and incredible holiday displays at Castle Noel. Created by artist Mark Klaus and housed in a former church in downtown Medina, this year-round destination is the largest privately owned collection of Hollywood Christmas props from movies, including pieces from “The Grinch,” “Elf,” “Jingle All the Way” and many more. (You can even check out Cousin Eddie’s RV from “National Lampoon’s Christmas Vacation,” which is parked outside.) Beyond the iconic props, Klaus’ museum also includes an unrivaled collection of window displays that once appeared in New York City department stores such as Saks Fifth Avenue, Bloomingdale’s and Macy’s. Then, there are the displays celebrating favorite holiday gifts from Christmases past, spanning from the 1950s through the 1990s. Guided tours are offered in small groups and culminate with an all-ages ride down a slide like the one Ralphie did in “A Christmas Story.” Visit website for hours. 260 S. Court St., Medina 44256, 330/721-6635, castlenoel.com

North Pole Express
Northwest Ohio Railroad Preservation | Nov. 26–Jan. 2
On Friday, Saturday and Sunday nights, Northwest Ohio Railroad Preservation in Findlay offers holiday-season rides on a quarter-scale train through a winter wonderland of twinkling lights and festive decorations. In addition to enjoying a ride on the scaled-down rail line, visitors can also take in the model train displays inside the small on-site museum and neighboring train barn. The North Pole Express experience also includes as many as 160 decorated trees, which are displayed both across the grounds and inside, while Santa and Mrs. Claus are scheduled to make appearances on select nights throughout the season. Northwest Ohio Railroad Preservation was founded in 1998 as an all-volunteer, nonprofit dedicated to the preservation, promotion and education of railroad history in northwest Ohio. Its full-size rolling stock on display includes two cabooses, a box car and small diesel switch engine and a relocated railroad depot. Visit website for hours. 12505 County Rd. 99, Findlay 45840, 419/423-2995, nworrp.org 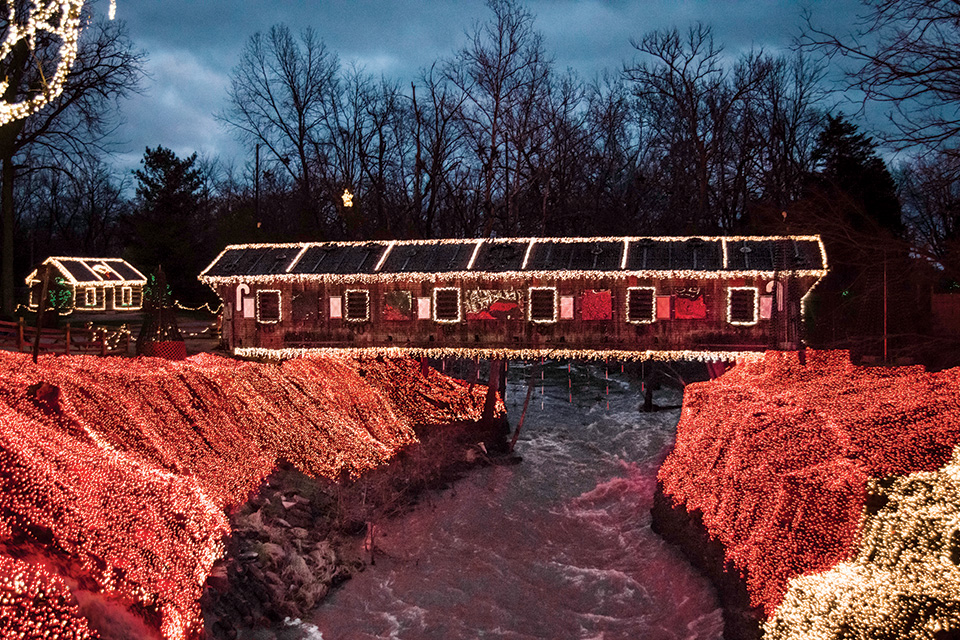 The Legendary Lights of Clifton Mill
Clifton | Nov. 26–Dec. 30
Located near Yellow Springs, the tiny village of Clifton is home to one of the state’s most famous holiday light displays. The exterior of the historic Clifton Mill and its adjacent covered bridge as well as the riverbank they sit on are decorated with strings of lights each holiday season. The mill was constructed in 1802 but was decorated for the first time in 1987 when Anthony Satariano Jr. and his father strung 100,000 lights at their property for the holidays. Now a display totaling almost 4 million lights, the annual spectacle draws families from near and far. There is also a light show on the covered bridge, a miniature town (complete with a 1950s Frisch’s Big Boy, opera house and drive-in movie theater) and the Satariano family’s collection of more than 3,000 likenesses of Santa Claus. Visit website for hours. 75 Water St., Clifton 45316, 937/767-5501, cliftonmill.com

Dickens Victorian Village
Downtown Cambridge | Nov. 1–Jan. 1
Travel back in time and get a hearty dose of holiday spirit with a visit to Dickens Victorian Village in downtown Cambridge. First created for the 2005 holiday season, the seasonal display features around 170 handmade characters dressed in Victorian-era garb and posed throughout downtown. (The unique display is a labor of love for the group of local volunteers who bring it to life each year.) Kick off your trip to town with a stop at Dickens Victorian Village’s welcome center, where you and the family can dress up in Victorian-inspired clothing and snap a photo in front of the decorated Christmas trees or with the Charles Dickens character. Another holiday staple in downtown Cambridge is the Guernsey County Courthouse Light Show, a 66,000-light, one-hour presentation set to holiday music that runs continuously throughout the evening. Light show runs from 5:30–9 p.m. nightly and to 11 p.m. most weekends. 801 Wheeling Ave., Cambridge 43725, 740/432-9230, dickensvictorianvillage.com 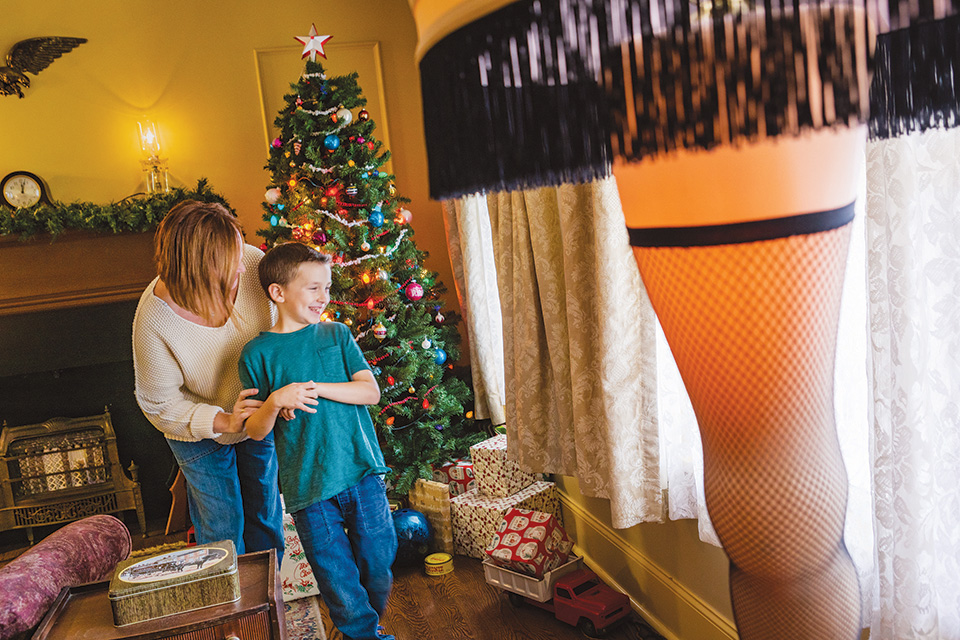 A Christmas Story House & Museum
Cleveland | Open year-round
We promise, you will not shoot your eye out. Experience the magic of a holiday classic with a trip to Cleveland’s A Christmas Story House & Museum. Located in the city’s Tremont neighborhood just outside downtown, this 1895 home served as the Parker family’s residence when exterior scenes for the 1983 movie were filmed here. (Interior scenes of the home were shot elsewhere, but the inside of the house has been lovingly re-created to match the movie.) Brian Jones, a San Diego native who also owns a company that sells replicas of the leg lamp the film made famous, bought the home on eBay. He restored it to its on-screen appearance and then opened a museum and gift shop across the street that showcases memorabilia tied to “A Christmas Story.” The property is open to the public for tours, and photo ops abound throughout the home and its backyard. Visit website for hours. 3159 W. 11th St., Cleveland 44109, 216/298-4919, achristmasstoryhouse.com

Steubenville Nutcracker Village & Advent Market
Downtown Steubenville | Nov. 23–Jan. 8
Visit a winter festival that captures the imagination with more than 180 6-foot-tall nutcrackers displayed throughout downtown Steubenville. What is billed as the world’s largest collection of life-size nutcrackers is free to visit and was launched as a local collaboration to create newfound excitement around the city’s downtown, which had been hurt over the years by the decline of the area’s steel industry. In 2015, Jerry Barilla, the owner of a local appliance store, had the idea to put collections of nutcrackers on display in empty storefronts to create a holiday-season attraction. Local craftsman Mark Nelson added on to that concept by building a prototype of a 6-foot-tall nutcracker with the help of his daughter and brother that served as the inspiration for this fun festival that runs from around Thanksgiving into the New Year. On display continuously throughout the season. 155 N. Fourth St., Steubenville 43952, 740/275-4134, steubenvillenutcrackervillage.com 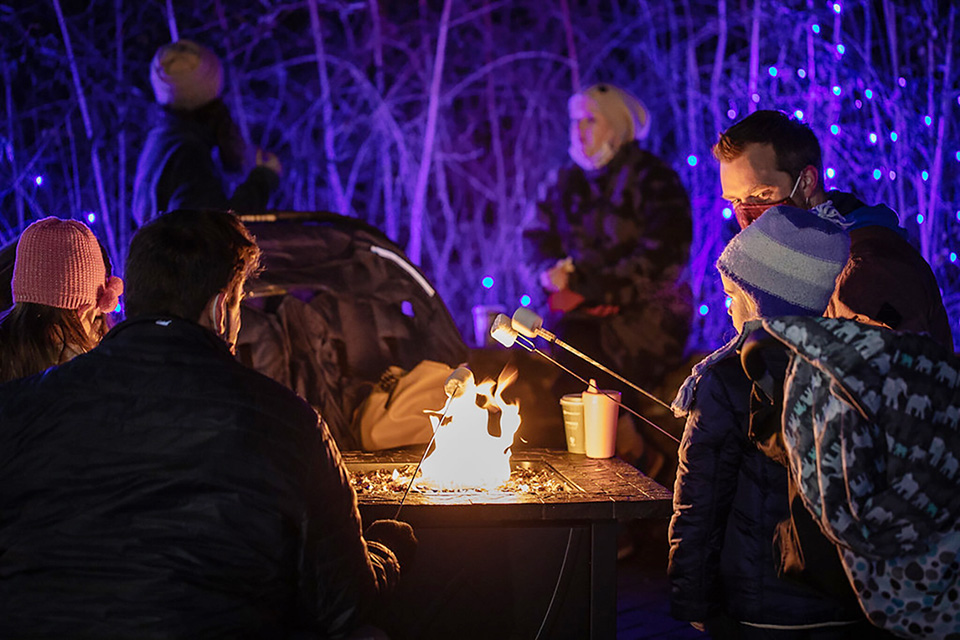 PNC Festival of Lights
Cincinnati Zoo & Botanical Garden  |  Nov. 19–Jan. 9
The Cincinnati Zoo & Botanical Garden’s annual event features more than 4 million lights strung throughout the zoo, creating a “Wild Wonderland” that delights all ages. Displays range from Under The Sea and The Rainbow Tunnel to The Wild Lights show on Swan Lake and 27 large animal lanterns scattered across the grounds. (First held in the early 1980s, the event requires crews to begin hanging lights in early August in order to be ready for the holiday season.) Other attractions and events that are part of the PNC Festival of Lights include the North Pole Express train, appearances by Santa and his helpers, a search for statues of the zoo’s star hippopotamus in Fiona’s Fairyland, costumed characters and the opportunity to roast s’mores. When it’s time to escape the lower temperatures, multiple heated buildings offer the chance to warm up and see zoo animals. Included in zoo admission, 10 a.m.–9 p.m. PNC Festival of Lights activities begin at 4 p.m. each day. 400 Vine St., Cincinnati 45220, 513/281-4700, cincinnatizoo.org

Holiday Junction featuring the Duke Energy Holiday Trains
Cincinnati Museum Center | Nov. 12–Jan. 2
Hop aboard for a Queen City tradition by heading to the Cincinnati Museum Center’s annual holiday train display. The model trains, some of which date back as far as 1904, are presented within elaborately crafted winter scenes that bring out the kid in all of us. Snap an Instagram-worthy shot at the majestic Northern Lights photo op display, take part in a holiday scavenger hunt and explore Brickopolis, custom Lego creations that include versions of structures inspired by famous places and stories as well as mobile Lego trains. The Omnimax theater is showing “The Rocky Mountain Express,” a film that traces the route of the Canadian transcontinental railroad and the awe-inspiring scenery through which it passes. Santa Claus will arrive the day after Thanksgiving and stay through Dec. 24. Open Thur.–Mon. 10 a.m.–4 p.m., closed Thanksgiving Day and Christmas Day. 1301 Western Ave., Cincinnati 45203, 513/287-7000, cincymuseum.org 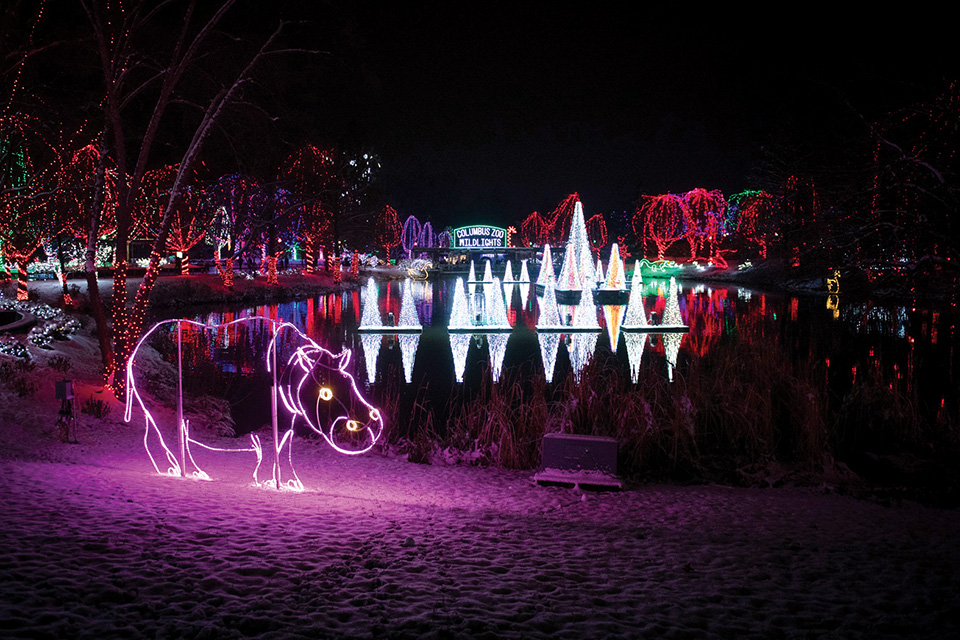 Conservatory Aglow
Franklin Park Conservatory and Botanical Gardens | Nov. 20–Jan. 9
Franklin Park Conservatory and Botanical Gardens shines with this spectacular annual light display that serves as the Columbus landmark’s largest exhibition of the year. New for 2021 is a presentation of various topiary animals residing in cozy illuminated habitats. There is also a kid-focused Candyland area with a lit-up lollipop forest and a life-size gingerbread house. Returning favorites from years past include the Glass Ornament Trees, decorated with hundreds of beautiful orbs, the Rainbow Tunnel (illuminated with a seasonal color scheme), the Paul Busse Garden Railway decorated for occasion and an animated light show in The Scotts Miracle-Gro Foundation Children’s Garden. Food and drink will be available to purchase, and unique holiday decor and gifts can be found at the Botanica Gift Shop & Greenhouse. 5–9 p.m. (the conservatory closes at 4 p.m. and reopens at 5 p.m. for Conservatory Aglow). 1777 E. Broad St., Columbus 43203, 614/715-8000, fpconservatory.org

Journey Borealis
Pyramid Hill Sculpture Park & Museum | Nov. 19–Jan. 2
This drive-through display among the rolling terrain of Pyramid Hill Sculpture Park in Hamilton features more than 1 million lights. Dubbed “Journey Borealis,” the show is created as an illuminated trip to the North Pole. It opens with a half-mile entrance of glimmering trees and arches before winding through the blue-and-white glow of Jerusalem’s Hannukah Celebration. Travelers will also see the Candy Cane Forest (with more than 50 yarn-wrapped trees), the Grinch’s Greenland and Bethlehem’s Birth of Jesus before arriving at the North Pole. Although “Journey Borealis” has a new expanded route, families who have made an annual holiday-season visit to Pyramid Hill Sculpture Park will still see their favorites. For the full experience, visitors are encouraged to download the Otocast app for their smartphones in advance in order to enjoy the show’s soundtrack, performed by the Butler Philharmonic Orchestra and Cincinnati Boychoir. No vehicles larger than a 12-passenger van; Mon.–Thur. 6–9 p.m., Fri.–Sun. 6–10 p.m. 1763 Hamilton Cleves Rd., Hamilton 45013, 513/868-1234, journeyborealis.com 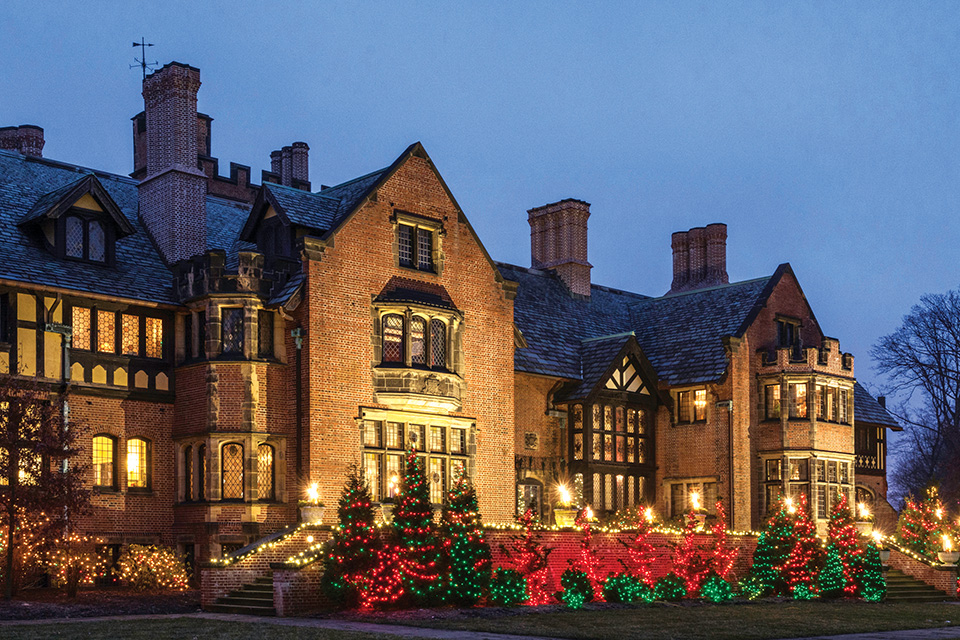 Deck the Hall
Stan Hywet Hall & Gardens | Select nights Nov. 26–Dec. 30
Feel the nostalgia and warmth of the Christmas season at Akron’s historic Stan Hywet Hall & Gardens, as the former estate of Goodyear & Tire Rubber Co. co-founder F.A. Seiberling is transformed into a holiday spectacle. A variety of rooms inside the manor house are staged to a different theme each year. The 2021 edition is “Lights, Camera, Christmas!” and the mansion will be decked out in the style of family favorites and classic Christmas movies. Decorations include 25 trees and a movie-theater-themed Reception Room. Outside, explore the 70-acre grounds and take in the display of 1 million holiday lights. “Dazzle,” a choreographed light show in the Great Garden is synchronized to holiday music. As visitors explore the grounds they can enjoy hot chocolate, cider and gingerbread as well as other festive concessions. Santa makes an appearance each night as well. Visit website for nights and hours. 714 N. Portage Path, Akron 44303, 330/315-3287, stanhywet.org

Wildlights
Columbus Zoo and Aquarium | Nov. 19–Jan. 2
The Columbus Zoo and Aquarium’s Wildlights has been a central Ohio holiday tradition since the late 1980s. The zoo becomes a bright and sparkling environment filled with animated displays that total more than 3 million lights. Attractions include the Polar Bear Express train ride that takes visitors through the North America Winter Wonderland as well as camel rides and the 1914 Mangels-Illions Grand Carousel, which was originally located at Columbus’ Olentangy Park. Visitors are invited to gather around Conservation Lake for a S’mores Experience, where they can build their own melty treats while taking in the captivating light display. Indoor areas open during the event include Manatee Coast, Discovery Reef, the Reptile Building, Adventure Coast sea lions and others. Reindeer will also make appearances during the festival, and Santa Claus will be at Polar Frontier through Dec. 23. Sun.–Thur. 5–9 p.m., Fri.–Sat. 5–10 p.m., closed Thanksgiving Day, Christmas Eve and Christmas Day. 4850 Powell Rd., Powell 43065, 614/645-3400, columbuszoo.org