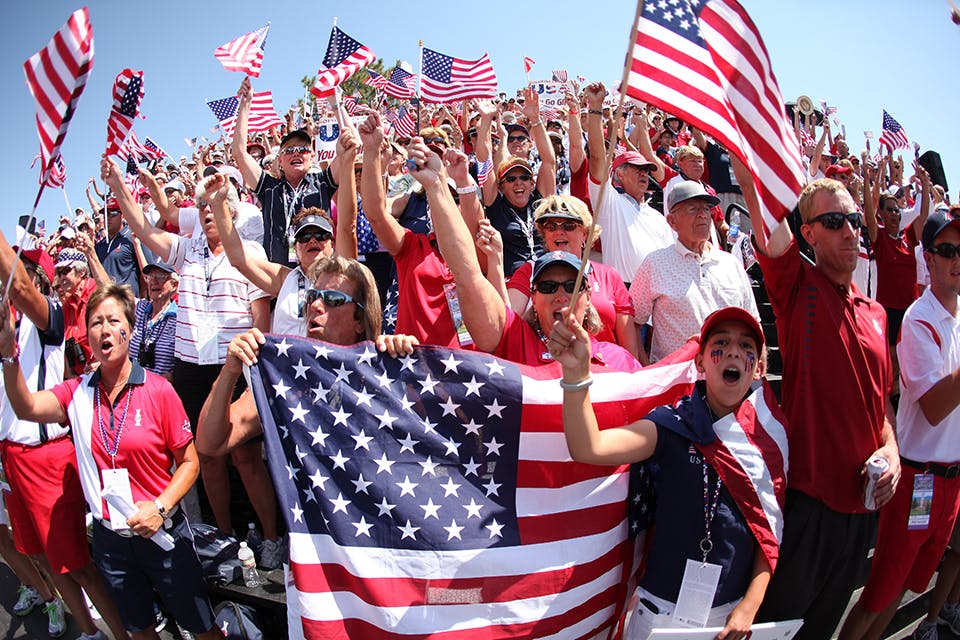 The biggest global team event in women's professional golf is coming to Toledo in September 2021.

This event is different than your typical professional golf tournament. It’s not about the traditional golf clap and there are no Marshals holding Quiet Please signs. We need you to GET LOUD, dance to the music on the first tee, paint your face, dress up in red, white and blue, and support TEAM USA.

Event tickets can be purchased at solheimcupusa.com.

The Solheim Cup combines the tradition and prestige of the game of golf with passion for one’s country. This biennial, trans-Atlantic team match-play competition features the best U.S.-born players from the Ladies Professional Golf Association (LPGA) Tour and the best European members from the Ladies European Tour (LET). The U.S. Team leads the competition, 10-6, with Europe having won the 2019 Solheim Cup at Gleneagles, Scotland.

Special Events
The city of Toledo has truly embraced the Solheim Cup and will be hosting many events in the Downtown Toledo area throughout the week. Solheim After Sundown Presented by Danberry Co., Realtors & Opening Ceremony event tickets are not included in your ticket purchase and must be purchased separately.

Solheim After Sundown Presented by Danberry Co., Realtors is the kick-off event for Solheim Cup week and will be taking place right in the center of downtown Toledo on Tuesday, Aug. 31! The event will feature an Americana theme, live music, delicious food, a live and silent auction and much more.

Tickets are $75 and are on sale now. Purchase your ticket at solheimcupusa.com/event-tickets (Solheim After Sundown will not be hosted at the tournament course and is NOT included in your previous Solheim Cup ticket purchase).

Opening Ceremony will be hosted at Promenade Park in downtown Toledo for a once-in-a-generation celebration! The Opening Ceremony will be one of a kind, as the downtown Toledo streets will be filled with artists, live performances, musicians, and aromas of fabulous cuisine from local Toledo restaurants. The live ceremony will stream throughout the footprint, followed by a performance by Gwen Stefani who will ignite the stage and continue the celebration.

Tickets are on sale at Ticketmaster and promenadeconcerts.com. (The Opening Ceremony will not be hosted at the tournament course and is NOT included in your previous Solheim Cup ticket purchase).

Team USA
The 2021 U.S. Solheim Cup Team will comprise 12 American players from the LPGA Tour, selected in the following order:

Captain Pat Hurst is a five-time member of Team USA and a six-time LPGA Tour winner, including the 1998 ANA Inspiration. Her Assistant Captains are Angela Stanford and Michelle Wie West, with one more Assistant Captain still to be named.

Team Europe
The 2021 European Solheim Cup Team will comprise 12 European players from the LET, selected in the following order:

Captain Catriona Matthew is a nine-time member of Team Europe and a four-time LPGA Tour champion, including the 2009 AIG Women’s Open. Her Vice Captains are Laura Davies, Kathryn Imrie and Suzann Pettersen.

Host Club
Inverness Club has forged a place of distinction in professional golf. Opening in 1903, the historic club has been the site of12 championships, including four U.S. Opens and two PGA Championships. Byron Nelson, who served as head golf professional from 1940 to 1944, recognized Inverness Club as his home course. S.P. Jermain, their first Board President, was credited with conceiving the idea of the Ryder Cup. The championship course was designed by the renowned architect Donald Ross. Inverness Club hosted the 2019 U.S. Junior Amateur and the 2020 LPGA Drive On Championship and is the host site of the 2021 Solheim Cup.