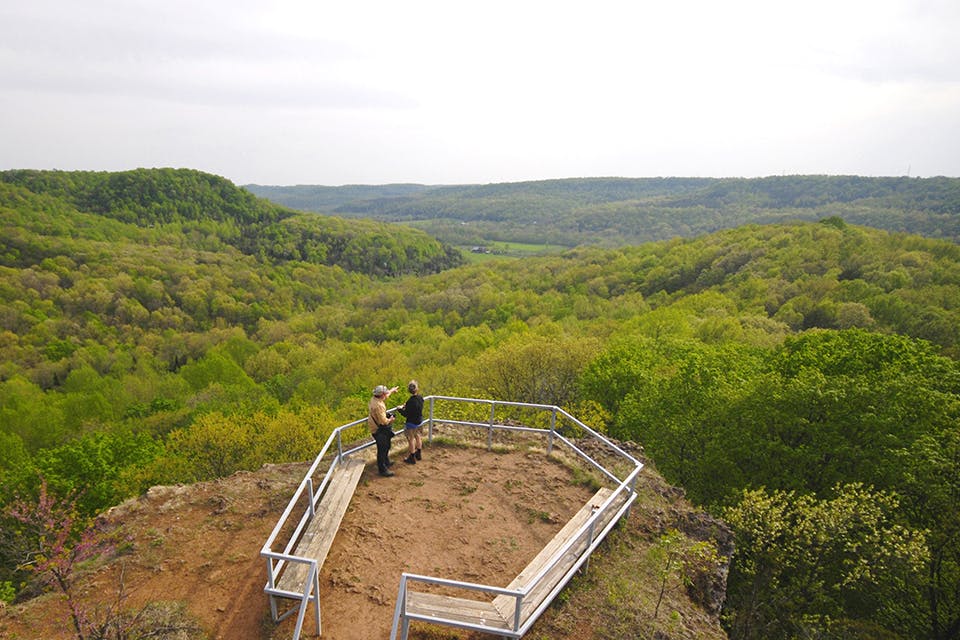 Many of the best examples of Ohio's forests, wetlands and grasslands have been protected by The Nature Conservancy.

Discover Some of Ohio’s Most Special and Beloved Natural Areas

Stroll the dunes left behind by an ancient version of Lake Erie. Scale Buzzardroost Rock for one of the finest vistas in Ohio’s “Little Smokies” region. Launch your canoe on a Grand River.

Many of the best examples of Ohio’s forests, wetlands and grasslands have been protected by The Nature Conservancy.

The Nature Conservancy is the leading conservation organization working around the world to conserve the lands and waters on which all life depends.  With more than one million members, The Nature Conservancy has protected 120 million acres worldwide, including more than 60,000 acres of Ohio’s most special and beloved natural areas.

You can explore and experience some of these amazing natural areas at seven preserves located throughout the state:

-        The Edge of Appalachia Nature Preserve, located in Adams County
Just 75 miles east of Cincinnati lies the 20,000-acre Edge of Appalachia Preserve, which boasts 10 miles of hiking trails and more than 100 rare plant and animal species. The land here is at the crossroads of two of Ohio’s most dramatic landscapes. The rugged, unglaciated Appalachian Plateau to the east is covered in rich hardwood forests, while the rolling Interior Low Plateau to the west features native prairie grassland with globally rare plant communities.

-        Kitty Todd Preserve, located in Lucas County
Kitty Todd Preserve consists of more than 1,100 acres of Northwest Ohio’s Oak Openings Region. The sandy soil of the preserve was originally part of the lake bed of glacial Lake Warren, an ancient predecessor of Lake Erie. The preserve protects both dry uplands and extensive wetlands, including globally rare habitats such as black oak savanna and twig-rush wet prairie. Those habitats support the highest concentrations of rare species of any nature preserve in the state.

-        Great Egret Marsh Preserve, located in Ottawa County
Located in the heart of a complex of marshes on the Marblehead peninsula, the 150-acre Great Egret Marsh Preserve boasts classic Lake Erie marshland, blanketed each summer with water lotus and teaming with wildlife. The preserve is a haven for waterfowl and wading birds—including great egrets, which can congregate there in abundance. Visitors to the preserve will find opportunities for wildlife-watching, fishing, hiking, kayaking and canoeing.

-        Morgan Swamp Preserve, located in Ashtabula County
At 2,000 acres, Morgan Swamp Preserve is one of the largest privately protected forested wetlands in Ohio. The swamp supports a variety of wetland types including bogs, beaver ponds, vernal pools, oxbows and sedge meadows. Amenities include three miles of interpretive trails, a canoe/kayak launch on the Grand River, and the newly opened Dr. James K. Bissell Nature Center—the only facility of its type in the county.

-        Brown’s Lake Bog Preserve, located in Wayne County
The 100-acre Brown’s Lake Bog Preserve protects one of the oldest kettle hole bogs in Ohio. The bog is a remnant of Ohio’s glacial past.  As the ice melted, it left behind a barren landscape with sporadic, water-filled depressions that provided excellent conditions for the establishment of the bog and the many plants that thrive in it—including those that are carnivorous, such as the pitcher plant. A boardwalk leads visitors out into the bog.

Photo by Randall Schieber. Courtesy of The Nature Conservancy.