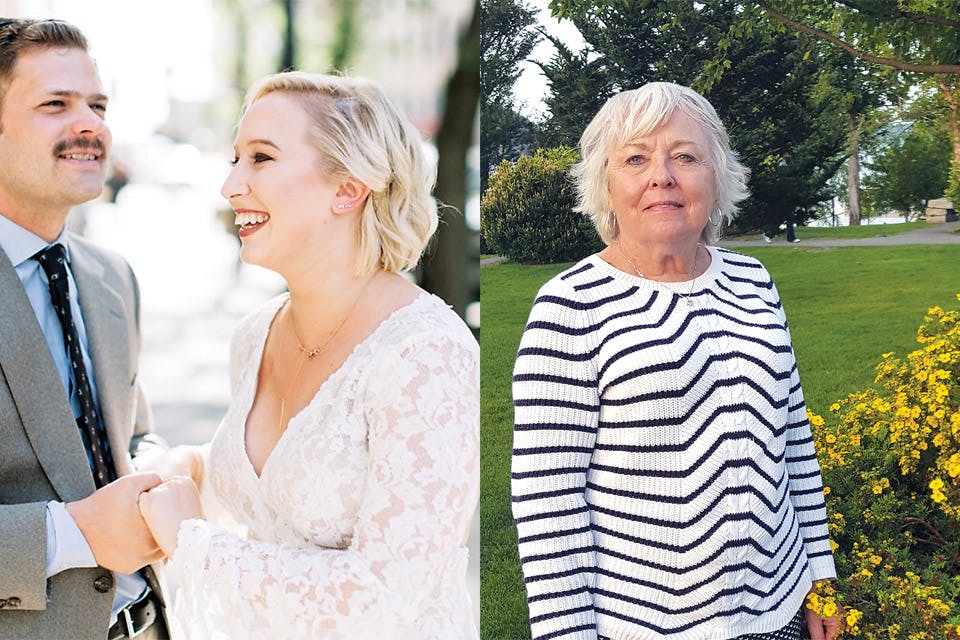 Two breast cancer survivors and their doctors share their advice for keeping a positive attitude and finding the right treatment for you.

“Cancer doesn’t always give you lots of clues — you have to really read your body,” says Sharon Hennessy, who in 1980 noticed a lump in her right breast while showering. Hennessy’s primary care doctor referred her to an oncologist, and she was immediately sent into surgery to remove the breast and surrounding, affected lymph nodes.

A year later, when an ultrasound of her left breast revealed shadows, she opted for another mastectomy.

“Once you’ve had cancer, it’s always on your mind,” says Hennessy, who was in remission until 1990, when she was diagnosed with metastatic breast cancer and treated with chemotherapy, which was effective. Hennessy went into remission.

But two years ago, after moving back to her hometown of Toledo from Arizona, a lingering cough that Hennessy thought was a result of the flu sent her back to a primary care doctor, who ordered a chest X-ray and CT scan. “Lung nodules were spotted, and biopsied and shown to have metastatic breast cancer,” says Dr. Divya Vijendra, an oncologist at Promedica in Toledo. Dr. Vijendra became Hennessy’s oncologist, first familiarizing herself with the woman’s history.

“Patients with metastatic breast cancer, unfortunately, can never be cured,” Vijendra says. “Eventually, patients will succumb to the disease. The treatment options we have can maintain quality of life and extend life.”

Hennessy is truly a success story because she was diagnosed with metastatic breast cancer 28 years ago, and today’s five-year survivorship rate is about 20 percent, Vijendra says.

In diagnosing someone with breast cancer, a pathologist examines the biopsy findings to determine the receptors (or proteins that are expressed on the tumor) or combination of receptors expressed. Those genes include estrogen receptor (ER), progesterone receptor (PR) and human epidural growth factor 2 (HER2).

“Breast cancer is not just one disease — it comes in many flavors based on targets,” Vijendra says.

New drugs target the specific receptors or proteins expressed on the tumor.

“Previously, HER2 positive cancer was a deadly disease, but now with newer treatments and diagnosis at an earlier age, [it] has been converted to a breast cancer with the best prognosis,” Vijendra says, pointing to the drugs Hennessy is taking today: Herceptin and Pertuzumab IVs that she receives through a port every three weeks. Every day, she takes the pill Femara.

“These drugs are well tolerated compared to chemotherapy,” Vijendra says. “Mrs. Hennessy is able to live a full life, travel and be fully functional.”

When someone asks Hennessy for advice in the face of their own diagnosis, she advises they remain hopeful.

“Keep your positive attitude,” she says. “There are so many new treatments out there to prolong life. Remember there are possibilities.”

“Cancer is not going to be your full-time job.”

When she was diagnosed with breast cancer at age 27 on Aug. 30, 2016, Laura Miller says this advice from her mother helped her focus on the life ahead of her. Miller had been in for a routine gynecological exam the week before, when her gynecologist found a lump in her left breast.

“Being so young, I didn’t think it was anything,” says Miller, who was starting her second year at The Ohio State University as a doctoral student of school psychology.

But the lump was cancerous, so Miller started chemotherapy in October of that year. Before that, she went through fertility preservation and genetic testing, and learned she is BRCA1 positive.

“Women with the BRCA1 mutation have a 72 percent chance of having breast cancer by age 80,” says Dr. Jeffrey VanDeusen, assistant professor and medical director of outreach for The James — The Ohio State University Comprehensive Cancer Center. “Different proteins that have damage to them can lead to different cancers, and in women, these BRCA mutations, or changes, increase the risk of developing breast cancer.”

Because of this, Miller opted for a double mastectomy after undergoing four months of chemotherapy. The chemo was successful, yet exhausting.

“The fatigue was cumulative, so after I finished chemo it took me another year to regain my energy,” she says.

VanDeusen understands the challenges chemotherapy patients face: Hair loss, fatigue, loss of appetite, nausea and increased chance of infection due to fewer white blood cells are common side effects. He says chemotherapy is draining, but medications and lifestyle changes can help combat the effects.

Miller had decided since the time of her diagnosis that she would opt for a bilateral mastectomy followed by breast reconstruction surgery. Following her mastectomy, she was declared cancer free in February 2017

“Emotionally, this next stage was the hardest for me, because I had been in fighter mode for so long,” Miller says.

The decision to have reconstruction, or not, is highly personal, and many women who opt for it do so to regain a sense of self. “It’s about restoring and preserving who you are — feeling whole again,” Lee says.

For those who do not want breast reconstruction, a prosthesis is an option.

“No one would know [you had a mastectomy] in clothes, or even in a bathing suit,” Lee says, adding that some women choose not to wear a prosthesis.

Miller is now healthy and has regained her energy. In July, she got married.

“I’ve done the hardest thing I am going to do in my life,” she says. “I would like young people not to take their health for granted.”