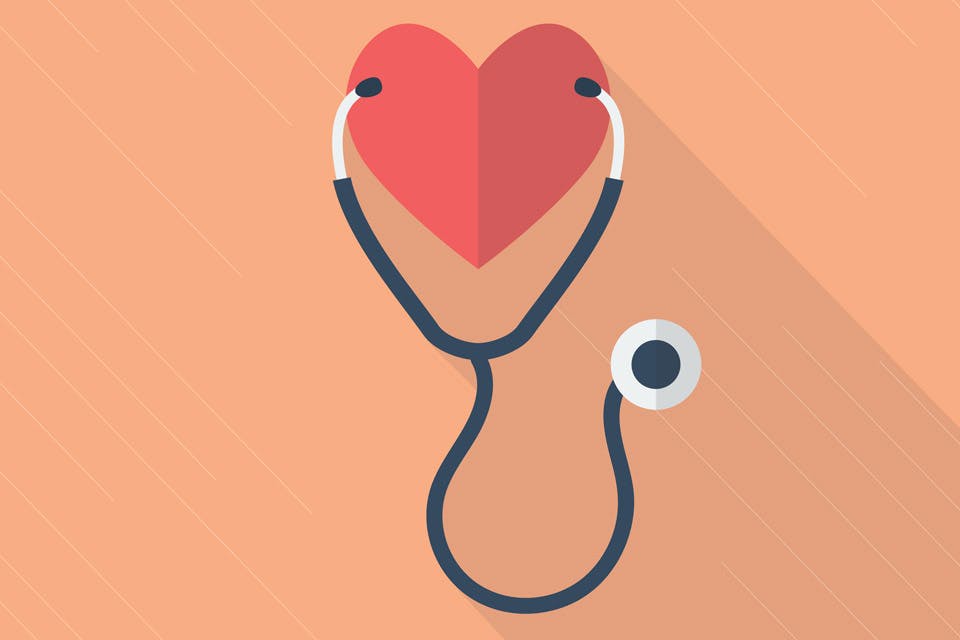 From smartphone ECG readings to a device that offers hope when surgery does not, advances in use at these Ohio hospital systems are changing the face of treatment.

Atrial fibrillation, or AFib, is the most common heart arrhythmia, and an irregular heartbeat — described as rapid, fluttering or pounding palpitations — affects up to 6.1 million people in the United States, according to 2017 data from the Centers for Disease Control and Prevention.

Cleveland Clinic cardiologist Dr. Khaldoun Tarakji explains that since AFib can occur intermittently in some patients, obtaining an accurate electrocardiogram, or ECG, reading in the doctor’s office can be a challenge.

“The key is to record an ECG when the symptoms are happening, and it can be hard to catch an episode,” he says.

A new innovation aims to fix that, and all that’s required is a smartphone, an app and a small electrode device that’s the size and shape of a domino. The smartphone heart monitor allows a patient to record an arrhythmia as it’s happening.

The patient places two fingers from each hand on the small electrode plug-in that connects to the phone. The smartphone then provides an accurate ECG rhythm strip, which can be emailed or uploaded to a Cleveland Clinic portal where doctors can access it. The tool allows physicians to more precisely track and monitor patients’ progress.

“We have access to data recorded over many months, not a snapshot from one visit,” Tarakji says.

AliveCor’s FDA-approved KardiaMobile is a leap for patients with AFib. The same company has also approved a smartwatch version called KardiaBand with a sensor that constantly records heart rate and alerts the wearer when to record an ECG.

When a patient is dealing with a thoracic abdominal aortic aneurysm — one that stretches from the chest to the abdomen — the surgery is arduous and full recovery is slim.

The aneurysm, a dangerous bulge in the aortic wall, is challenging to treat because it involves arteries that supply blood to organs including the stomach, colon and kidneys. Some patients with this condition aren’t candidates for surgery at all. And if they are, they may never fully recover.

“Even if we were to repair the aneurysm with open surgery, the patient rarely gets back to a normal life,” says Dr. Geoffrey A. Answini, a cardiothoracic surgeon at The Christ Hospital in Cincinnati and principal investigator for a new stent graft system that’s an alternative to open surgery.

The Medtronic Valiant TAAA Stent Graft System is designed to repair thoracic and abdominal aortic aneurysms. The Christ Hospital was first to deploy the entire graft system in a patient who was not eligible for a third surgery.

“With the use of this graft [for the patient], there was a complete reconstruction of the aorta from the chest all the way to the abdomen — frankly, in record time,” says Dr. Dean Kereiakes, medical director of The Christ Hospital Heart and Vascular Center.

The Christ Hospital is one of five U.S. sites participating in an investigational device exemption trial of the FDA-approved stent graft system, which allows blood to continue flowing to the kidneys, liver and intestines after the aneurysm is sealed. The entire procedure can be performed without open surgery.

“This is definitely the wave of the future. The exciting thing is the results with this device which have happened early in the evolution of the technology,” Kereiakes says, adding that future generations of devices tend to get smaller and even easier to deploy.

“This provides hope for people who would otherwise not have options,” Kereiakes adds.

Diastolic heart failure occurs when the heart muscle stiffens and does not relax enough for blood to flow into the lungs. Drugs fail to meaningfully remedy patients’ symptoms, according to Dr. Rami Kahwash, an advanced heart failure/transplant cardiologist and director of the Heart and Vascular Research Organization at The Ohio State University Wexner Medical Center’s Richard M. Ross Heart Hospital in Columbus.

The rise underscores the need for better treatment, and the hospital has found one answer: the transcatheter implant. Working like a pressure-release valve, the dime-sized implant relieves high pressure created when blood backs up while traveling from the lungs to the heart.

“By creating a small opening between the upper two chambers of the heart, we can create a pop-off valve that does not allow pressure to build up. Rather, it gets released by passing some of the blood into the right side of circulation,” Kahwash says. “This is a dynamic solution for a dynamic problem.”

The hospital participated in phase one and phase two randomized trials of the implant and is now beginning to prepare for phase three.

“Lasix and other medications can alleviate some symptoms of [diastolic heart failure], but we need something that actually relieves the pressure as it rises,” Kahwash says. “We are excited that for the first time we are able to do something that can improve patients’ quality of life and address the increase in lung pressures.”

Should you table the salt? Are you drinking enough water? Is there really such a thing as good fat for your heart? With headlines that scream, “Do this, don’t do that!” what balanced approach can healthy individuals take to protect their hearts without setting too many limits? We turned to two Ohio cardiologists who share practical strategies for promoting heart wellness.

Do I Need to Cut Caffeine?
The caffeine question is a controversial one: If you’re sensitive to this stimulant, it could raise your heart rate and blood pressure. But if that’s not an issue, drinking up to four cups a day of a caffeinated beverage actually could be healthy because of the inflammation-fighting antioxidants it contains. “Caffeine is not just good for the heart. Studies show lower dementia rates [may be possible] when you drink coffee,” says Dr. Harvey Hahn, a cardiologist with Kettering Physician Network in Kettering. “But there is definitely a group of people who feel their heart beats funny when they drink caffeine, and they should avoid it.”

What About Salt?
If your blood pressure is normal and you’re not overly sensitive to salt, then there’s no reason to drastically reduce your intake or eliminate it from your diet. The American Heart Association recommends 1,800 to 2,000 milligrams per day for most people. Those recommendations can be a little low for healthy individuals who do not have hypertension, high blood pressure or a recommendation from their physician to curb sodium, according to Dr. William Colyer Jr., a cardiologist at ProMedica Physicians in Toledo. “The majority of the population does not need to be so concerned about counting every milligram of sodium they get in their diet,” he says.

Am I Drinking Enough Water?
Do you really need to drink eight glasses of water each day? “That is based on no data,” Hahn says. And, the cardiologist adds, for patients who take a diuretic or have high blood pressure, drinking excessive amounts of water is not advisable. “Drinking too much water increases blood pressure,” he says. So, how much is too much if you fall into one of those categories? Hahn suggests taking an old-fashioned approach: “Drink if you’re thirsty.”

Are All Fats Bad?
“Trans fat is bad,” Hahn explains. “Excessive fat is also bad, but there are good fats, and studies have shown that Omega-3s can make cardiovascular mortality rates go down.” Those good fats, which can be found in foods such as nuts, avocado and olive oil, make us feel fuller and stave off cravings. “To be too restrictive with fat means you are probably replacing it with sugar and refined carbohydrates,” Colyer says. “The way the body burns through good fats versus empty calories is the difference between burning paper and burning wood.”

Does Being a Hothead Affect Heart Health?
Hahn says that when you’re angry, there’s a two-hour window of time when you’ll experience an increased risk of stroke, irregular heartbeat and heart attack. “That’s all from just blowing up at someone,” he explains. “Studies show that people who make a practice of thinking about what they are happy for, or have gratitude, have lower inflammation, fewer cardiovascular events and live longer.”