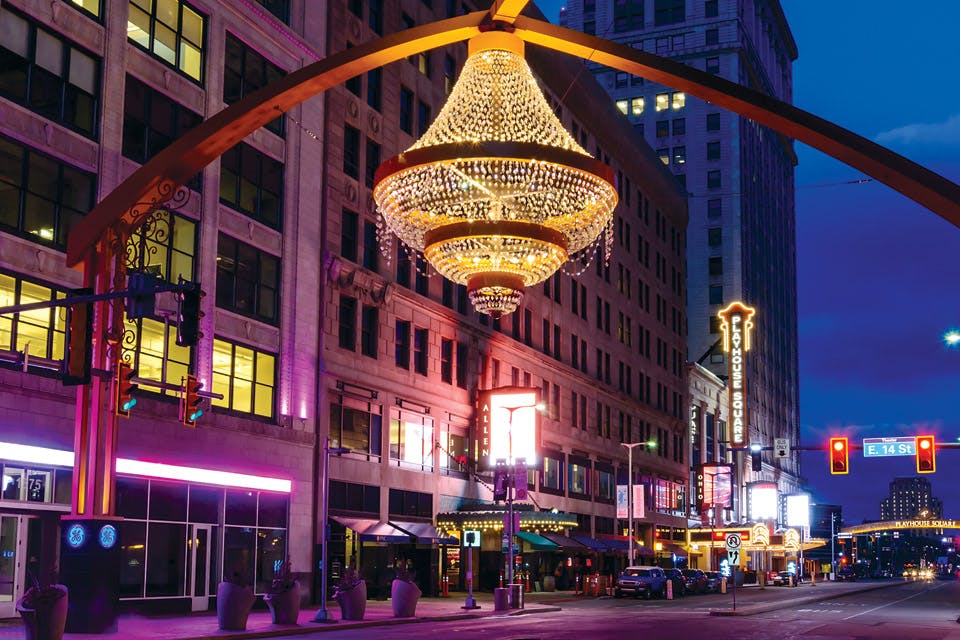 Cleveland’s Playhouse Square promises evenings of splendor, with each of the district’s four primary theaters boasting an elegance that reflects a bygone era. But prior to 2014, the street outside failed to fully reflect the grandness that the Theater District’s historic buildings contained.

When it was installed above the intersection of East 14th Street and Euclid Avenue, some Cleveland officials worried that the GE Chandelier — the world’s largest outdoor chandelier at the time — would dazzle drivers into accidents. But since May 2, 2014, the light fixture has only increased traffic from curious travelers.

“We started in earnest back in the early ’90s, looking at what to do with the neighborhood; how to bring vibrancy into the neighborhood,” says Tom Einhouse, vice president of facilities and capital at Playhouse Square. “Along the way, the idea of a chandelier came up. … I always thought it would be a pretty neat, iconic piece at that intersection.”

From start to finish, the chandelier, which is made of stainless steel and holds 4,200 acrylic crystals, took a year to make, with help from Montreal lighting manufacturer Lumid.

“It’s unbelievably stable,” says Einhouse, noting that the beams suspending the piece can support up to five times its weight. “We have winds coming down East 14th Street that I know hit 50 miles an hour. The chandelier doesn’t move. The crystals sway a tiny bit.”

The chandelier was also designed to require minimal maintenance once installed and is cost efficient for its size. Its annual electric bill totals less than $1,000, which is in large part due to its LED lights and timer.

“We have it set to go on one hour before sundown and stay on until one hour after sunrise,” Einhouse explains.  “At that rate, we have to change the lights every 10 years.”

The chandelier is a bold centerpiece for events such as the Tri-C JazzFest and weekly summer farmers markets, but it’s also a backdrop for countless Instagram and Facebook posts.