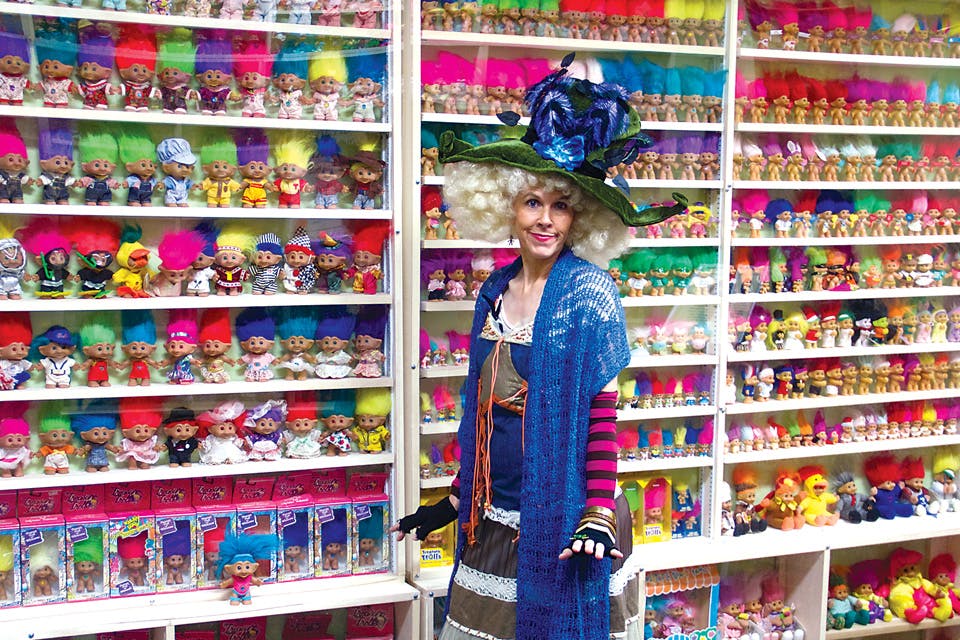 Sherry Groom’s spot celebrates all things troll with more than 20,000 dolls and other pieces of related memorabilia.

Sigrid’s wild blonde hair puffs out from underneath a tall, crumpled hat decorated with a sprout of feathers that match her purple shawl and accent her colorful dress. She spins yarns about troll folklore from around the world as she leads guests from room to room, each filled floor to ceiling with dolls, dioramas and memorabilia.

Sigrid is the brainchild — and alter ego — of Sherry Groom, co-creator of The Troll Hole Museum in Alliance. She opened the place in 2014 as a home for her personal collection of troll dolls, which numbered 3,000 at the time.

“It evolved into a museum and became an anchor for creating a tourist destination in downtown Alliance,” she says.

Bit by bit, Groom has accrued more than 20,000 troll figures and related pieces of memorabilia. The squat storefront that houses her museum is filled with a maze of exhibits, dioramas, sculptures and art. There’s even a small cafe and gift shop within the 6,000-square-foot space.

“We have a grotto with a waterfall, the Three Billy Goats Gruff bridge,” says Groom. “We have a troll mountain in the back, and we continue to add.”

Next year, Groom will offer a nod to the nearby Pro Football Hall of Fame with a football-field exhibit featuring sports-themed troll dolls, and she recently put the final touches on an interactive treasure hunt for visitors.

Whether she’s leading tours in character as Sigrid or as herself, Groom’s passion for troll lore shines. She’s created a space that’s not simply fun but captivating, in large part, through storytelling. Even Sigrid, a Huldra troll that Groom invented to serve as a face of The Troll Hole Museum, has a legend behind her.

“Huldra trolls are a type of troll that are very human-like,” she explains. “They dress and masquerade as humans. … Their goal is to try to marry humans. Should you marry a troll, if you mistreat them, they’ll turn very ugly and mean.”

Troll dolls have enchanted many of us over the years, and Groom says there’s some magic in the wild-haired creatures that have cemented themselves in pop culture. She received her first troll doll at age 5, but Groom began collecting seriously in the 1990s. The way she tells it, we can’t help ourselves from being drawn to them.

“It’s not just a doll like a Cabbage Patch [Kid] or a Barbie,” Groom says. “[Trolls] are legendary beings that have magical powers. ... The trolls love that the dolls were made in their image, and so they bewitch people into collecting troll dolls and being fascinated with them.” 222 E. Main St., Alliance 44601, 330/596-1157, thetrollhole.com