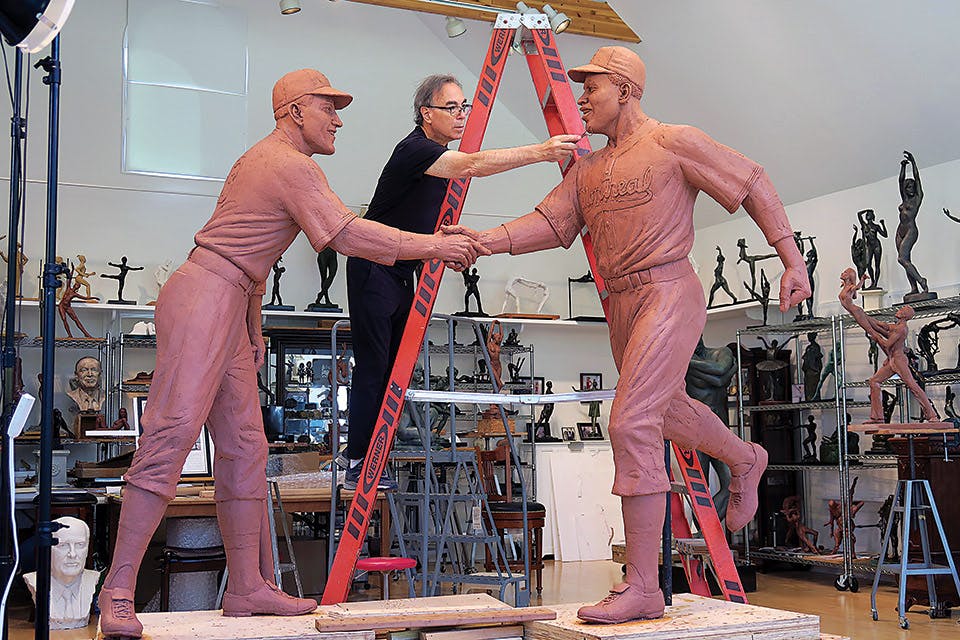 A year before he joined the Brooklyn Dodgers as the first African-American major leaguer, Jackie Robinson integrated the minor leagues. During his second at-bat with the Montreal Royals at Roosevelt Stadium in Jersey City, New Jersey, on April 18, 1946, the former four-sport letterman at UCLA hit a home run over the left-field fence.

The two runners on base scored and returned to the dugout without acknowledging the man who drove them in. But the next batter, George Shuba, congratulated Robinson with a handshake at home plate, a simple yet significant gesture captured by photographers. Shuba, a Youngstown native, and Robinson were teammates for several years, but their handshake that bridged barriers was not a well-known story in Shuba’s hometown.

Eric Planey, who grew up in Youngstown and formerly worked at the regional chamber of commerce, did not learn about Shuba until he moved to Brooklyn. “I heard the story and I wondered, Why is there not a statue or plaque of him in Youngstown?”

That’s when he began working to immortalize the famous handshake in bronze. Installation of The Robinson-Shuba Commemorative Statue in Wean Park was scheduled for the 75th anniversary of the moment, but it has been postponed until summer (a date will be announced in mid-May). Planey says the project has the support of Major League Baseball and the Robinson family, and donations both large and small are funding the $400,000 project.

“Our very first donation was $10 from a man from Hubbard, and our second donation was $50,000 from the Youngstown Foundation,” he says. “People really embraced it.”

Sculptor and Brooklyn native Marc Mellon is creating the statue. His other works include the NBA Most Valuable Player Award and the Muhammad Ali Voice of Humanity Honor. Mellon says the challenge was capturing the joy of the moment, while imparting a deeper meaning.

“The message of this sculpture is all about finding common ground,” Mellon says. “There are a whole lot of people who want to do the right thing going forward, and I think this sculpture speaks to that. Ultimately, we’re all teammates.”