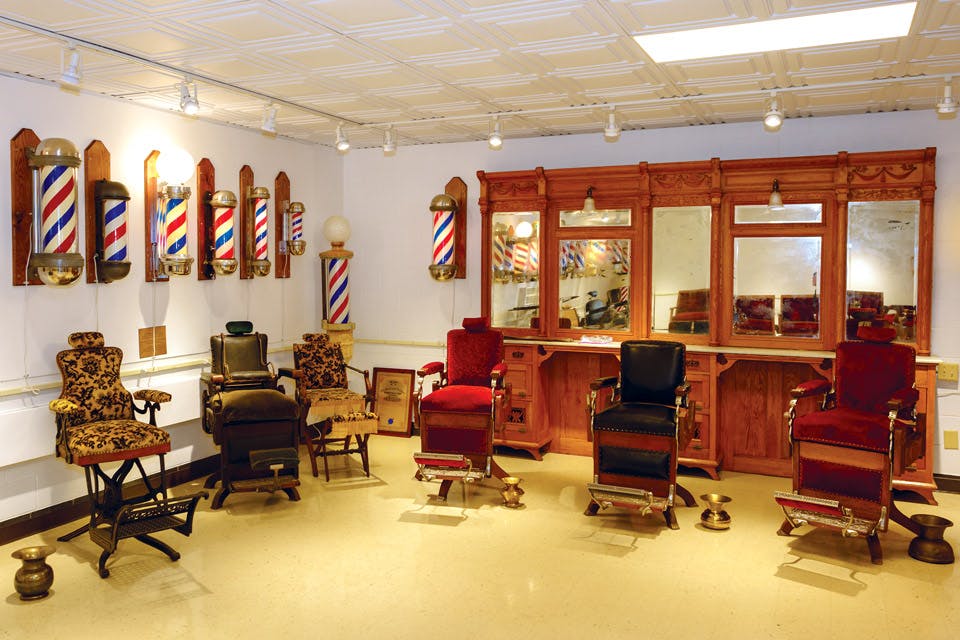 The National Barber Museum and Hall of Fame, Canal Winchester

Barber Ed Jeffers’ tribute to his trade lives on, offering insight into the long history of the barbering business.

Some of the more than 50 chairs sport velvet seat cushions, while others boast handsome carvings along their arms. Still others are just simple, metal thrones that immediately conjure memories of checkered floors and aftershave.

Canal Winchester’s 5,000-square-foot National Barber Museum and Hall of Fame is packed with centuries’ worth of artifacts from the trade. Barber Ed Jeffers founded the place in 1988, using space over his shop at 2 S. High St.

“People started giving him stuff,” says Mike Ippoliti, director and curator of The National Barber Museum and Hall of Fame. “He was nationally known for his activism with the National Association of Barber Boards of America.”

In fact, he says, the origin of the iconic barber’s pole was influenced by the practice of bloodletting to improve health: the red represents blood, while the white symbolizes bandages.

“The blue stripe came in later because they thought, Oh, well we can aerate veins too,” Ippoliti says.

Jeffers specified that the museum stay in Canal Winchester following his death. But a 2014 fire at the restaurant located on the first floor of the building that housed the museum forced a move. Today, the collection occupies empty classroom space behind the local school district’s administrative offices.

Jeffers started the Hall of Fame in 1965. The more than 60 inductees to date include Columbus barber and woodcarver Elijah Pierce who garnered fame for his folk art.

“There’s a statue in the place where they tore down the shop,” Ippoliti says of Pierce. Years ago I met him … [I] didn’t know at the time I’d be talking about him almost daily.”