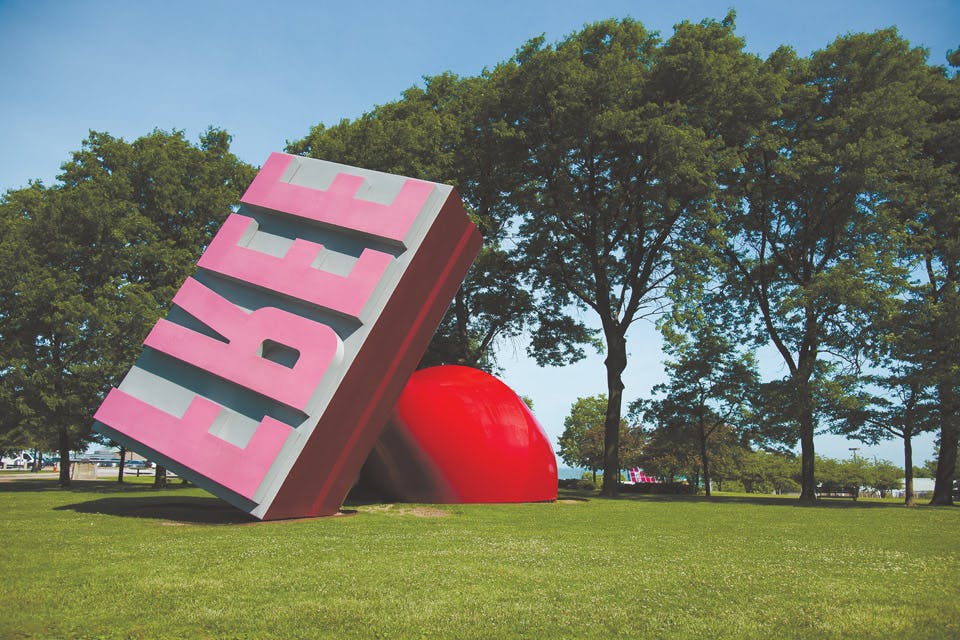 After getting rejected twice, a now-iconic piece of public art found a home in Willard Park in 1991.

Meet me at the Free Stamp. For a Clevelander, no further directions are needed. Poised as if dropped from the sky into Willard Park, just east of Cleveland City Hall, the larger-than-life, bright-red stamper stands nearly 28 feet high, 26 feet wide and 49 feet long. The sculpture was installed in 1991, but it almost didn’t end up where it rests today.

In the 1980s, Standard Oil of Ohio CEO Alton Whitehouse commissioned acclaimed artists Claes Oldenburg and the late Coosje van Bruggen to create the huge stamper, which bears the word “FREE” in reverse across its bottom, for display outside the oil company’s downtown Cleveland office building. Renowned for their large-scale sculptures, Oldenburg and van Bruggen had planned to install the stamp upright.

“The executives came in and decided the sculpture was inappropriate for their new office building downtown, so they canceled the project,” explains Edward Olszewski, former chair of Case Western Reserve University’s art history department. “That’s when I became involved with it.”

After British Petroleum purchased Sohio in 1986, company executives donated the yet-to-be-unveiled piece of art to the city of Cleveland, where it was met with more rejection.

“When the offer was first made, Mayor [George] Voinovich suggested that it go into Willard Park … but city council would not approve that,” says Olszewski. “The work was already made — albeit in pieces — awaiting shipment from a factory in Illinois. It languished there for a few years.”

Then, in 1990, Mayor Michael White took office and won approval for the sculpture’s installation in Willard Park, where it remains to this day. Oldenberg and van Bruggen argued that the work was created specifically for its original location, so they chose to modify the concept. Rather than present the stamp upright, they changed its display to offer a clue about the saga surrounding its creation.

“It’s placed diagonally, and it points to the 23rd floor — the executive suites — of the old Sohio Building,” Olszewski says.