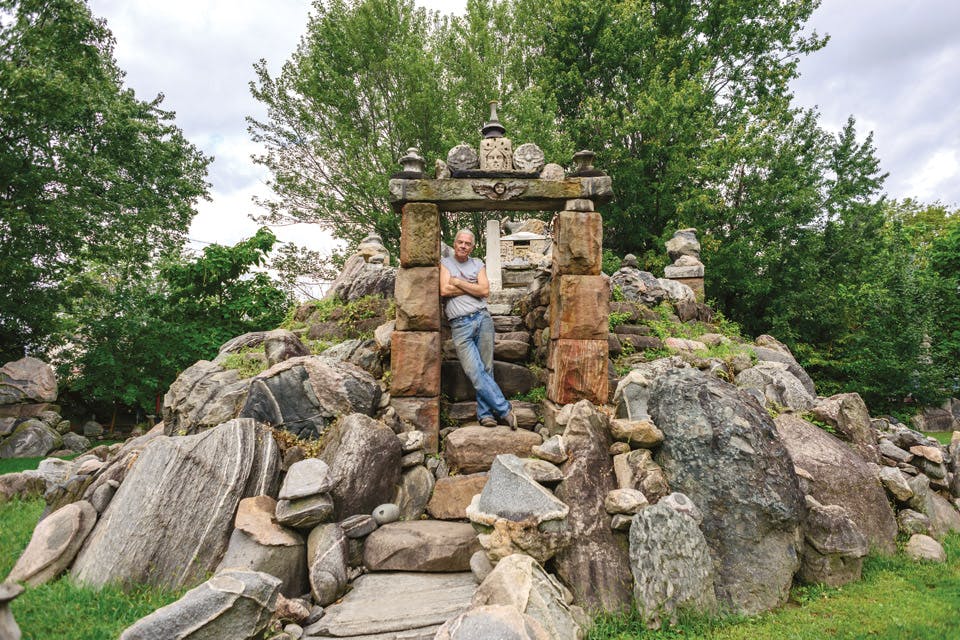 Hundreds of tons of stone sit on the lawn at 203 S. Wood St., but the arrangement is hardly unintentional. The rocks form the Temple of Tolerance, a tribute to acceptance to which philosopher, artist and teacher Jim Bowsher has dedicated not only his 1-acre yard, but also his life.

During his time as a creative writing teacher in the prison system, Bowsher was inspired to help find a way to keep people from ending up behind bars in the first place. He started searching for rocks in fields across the state and hauled them home to transform his yard into a haven where troubled kids could find some peace. “I knew that they were addicted to dysfunction at home,” Bowsher says. “I had to re-addict them to the peace and tranquility of my yard.”

The project began in 1981, when he began collecting a variety of items ranging from boulders to wind chimes, and was completed in 1999 when he tucked the last stone into place. The final result is a maze of rock sculptures and carvings, millstones, urns, wrought-iron fences and other offbeat treasures, including a portion of a counter that bank robber John Dillinger once hopped over during a heist.

Bowsher can be found here nearly every day, offering guidance and conversation to visitors. And while he regularly draws curious out-of-towners, class field trips and even weddings, he most values his time with the neighborhood kids.

“They’ve imbued it with their own spirit,” he says. “When those kids leave after all that screaming and running around, the place is jumping. There’s so much energy in the yard. … Some of that energy will die down, but some of it stays.”