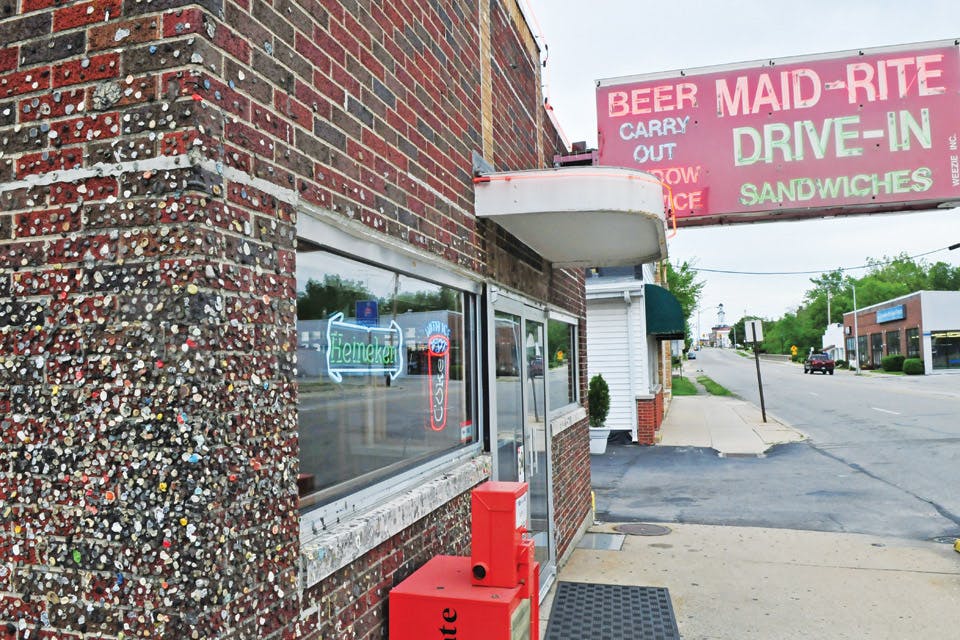 The exterior of this Greenville restaurant holds years of memories ... really.

The exterior of The Maid-Rite Sandwich Shoppe could be considered public art, with gray and white blobs accented by dabs of red and blue studding the restaurant’s brick walls. But the medium of choice is not paint or glass, it’s gum, and the chewed-up morsels are the result of a tradition that stretches back decades.

The restaurant itself dates back to 1934 when Mark Koontz’s great-aunt, Louise Maher, opened the place with her brothers Gene and Tom. “It’s always been very family based,” says Koontz, who now runs The Maid-Rite Sandwich Shoppe.

The menu has been simple from the start and offers soda, shakes, ice cream, Mikesell’s potato chips and seven sandwiches, including the classic Maid-Rite — a steamed, loose-meat sandwich served on a golden-brown hamburger bun. The trim menu has hardly limited customer satisfaction, with the Greenville restaurant serving as a favorite for locals and a destination for out-of-towners, but no one is completely sure how the traditional of sticking a wad of chewing gun on the outside of the building even started.

“The gum started to populate the building back when we opened — I don’t have a firm date,” says Koontz. “It started on the back of the building. People, when they were coming in, instead of throwing it on the ground, they would just stick it on the back wall.”

The practice stuck, so to speak, and Koontz frequently hears from people with sentimental stories about the time they made their addition to the wall. “It’s a memory for them,” he says. “We’d have so many people that would get so angry at us for getting rid of it. I think it’s kind of cool.”

So, Koontz and his family have left the gum intact, except for the drive-thru area, which gets a cleaning every summer.

“Gum is made of a lot of sugar, and sugar attracts bees,” explains Koontz. “It seems as soon as we scrape it, people just put it back faster.”