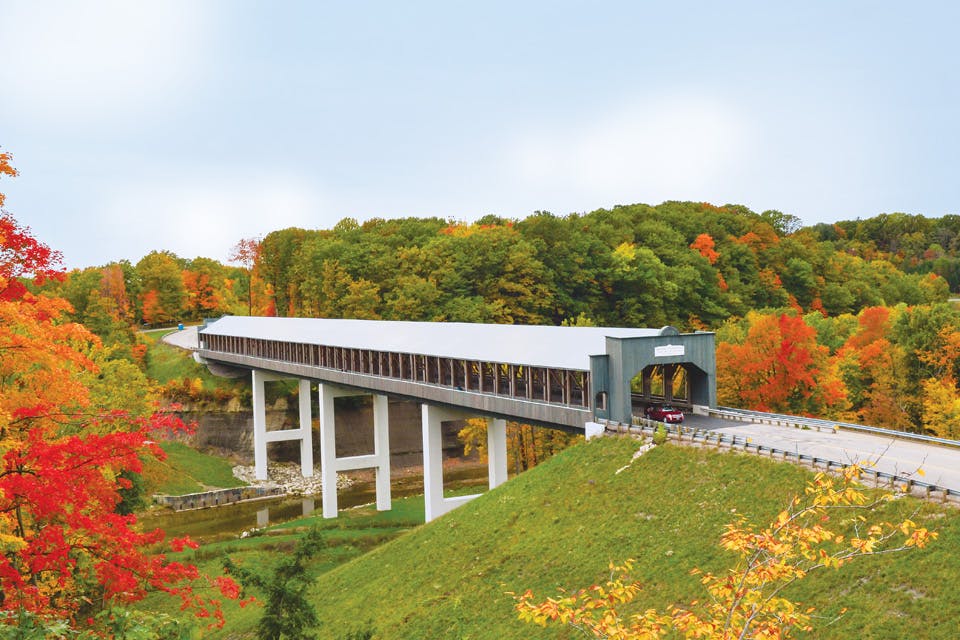 This 613-foot span holds the distinction of being the longest covered bridge in the United States.

Drive the Ashtabula County countryside and you’re likely to encounter one of the region’s covered bridges — both restored and newly built reminders of a time when wooden beams and a shingled roof were the epitome of roadway technology. Yet, engineer John Smolen is the first to say that covered bridges still serve a functional place in the modern world.

“Wood is a good bridge-building material,” he explains, especially in a place with harsh winters. “We know what salt does to steel and concrete. Well, salt actually preserves wood.”

Additionally, Smolen explains, wood is very strong in proportion to its weight — a vital consideration when it comes to the county’s Smolen-Gulf Covered Bridge, a 613-foot-long wooden truss structure that is the longest of its kind in the United States.

“For its span, [it] is much lighter than a steel or concrete bridge,” Smolen says.

In fact, the Smolen-Gulf Covered Bridge, which opened to traffic in 2008, was designed as a solution to a deficient steel bridge that formerly spanned the Ashtabula River. The bridge was named in honor of Smolen, the county engineer at the time.

As sturdy as wooden bridges are, there are conditions surrounding their construction. For one, the approach to the bridge can’t curve, as it makes the construction of the trusses impossible. In the case of the Smolen-Gulf Covered Bridge, the location worked and the width of the river made it possible for the new span to claim the title of the nation’s longest covered bridge.

Because Ohio has the second-highest number of covered bridges in the U.S. (with 19 in Ashtabula County alone), the Smolen-Gulf Covered Bridge serves as a modernized continuation of a heritage that began thanks to the state’s plentiful woodlands and wealth of rivers and streams.

“Timber was prevalent here, and the land had to be cleared for houses and farms and roads, so timber was in excess,” Smolen explains. “Therefore, you built most everything out of wood — your homes, your fences, you name it — including bridges.”