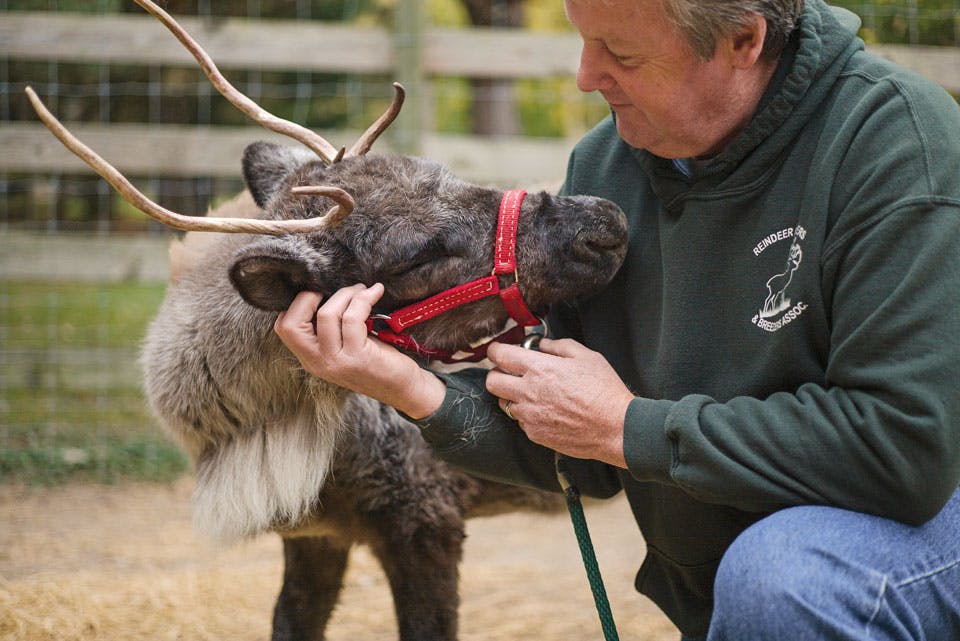 Dan and Linda Downs’ farm in rural Marion County is home to Toto, Comet, Tinsel and six other reindeer.

December 2015 Issue
BY Jill Sell | Art by Joshua A. Bickel

December 2015 Issue
BY Jill Sell | Art by Joshua A. Bickel

Toto has shiny eyes, soft nostrils and antlers that, at his young age, look like pathetic, crooked pretzel rods growing atop his head.

They pale in comparison to the magnificent antlers that grow like mighty oak tree branches from Comet and Tinsel, two other male reindeer among the nine that frolic in a stand of pine trees at Dan and Linda Downs’ farm in LaRue, located in rural Marion County.

But it’s all just a matter of time. As young Toto ages, his antlers will also grow larger and more impressive — the unmistakable sign of a mature and healthy bull reindeer.

“Toto is special to us,” Linda says. “During his birth, all you could see were his toes sticking out for a long while, and we were worried about him. We had to bottle-feed him every four hours. Dan got up at night just to feed him.”

They’re a mostly friendly lot, with Twiggy being the most temperamental, according to Dan. He explains that despite their pop culture image as amiable creatures, some reindeer are aggressive. The couple used to own a big bull reindeer named Gunther, who they sent to live on a farm in another state.

“Once I was in a stall with my back turned and Gunther charged me,” Dan recalls. “I swung around with a bucket in my hand that I used as a shield and got away, but it was a wake-up call.”

The couple’s first two reindeer, 6-month-old Fritz and Flossie, arrived from a reindeer farm in Minnesota 12 years ago, and Linda still recalls the day fondly. “When they got off the truck, they were just the cutest things,” she says.

But how did the Downses, who own Diversified Insurance Services, also become reindeer farmers? Dan explains that his parents had always made Christmas special for him when he was a child. When he became an adult with his own home, not far from where he grew up in LaRue, he continued the tradition of holiday lighting displays.

One year, a friendly competition with his neighbors for the most elaborate presentation led Dan to add live reindeer. From there, the herd grew.

“People kept telling us that there weren’t such things as reindeer, but there they were,” Dan says. “Reindeer are related to caribou, but are about 8-to-10 inches shorter.” 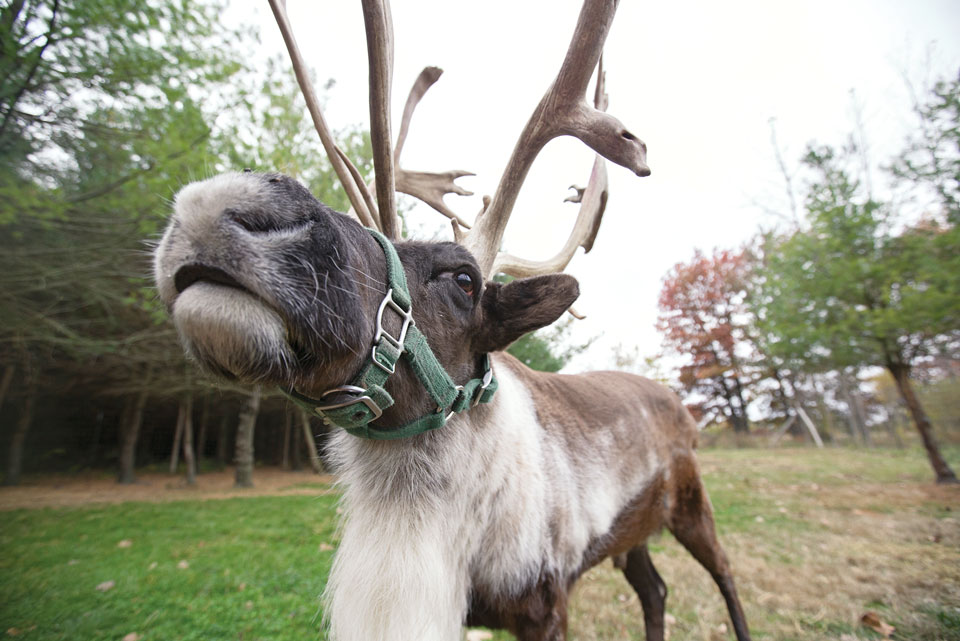 “There’s nothing crazy about owning them,” says Dan Downs, who raises several reindeer at his home in rural Marion County. (photo by Joshua A. Bickel)

The Downses’ reindeer have the run of a pine forest and a tundra-like pasture on the property, plus a shelter barn, all enclosed by high fencing that keeps the reindeer in and the area’s inquisitive wild, white-tailed deer out. Reindeer are fairly quiet animals, Dan explains, adding that they grunt just a bit and make a sound when they walk as the tendons in their feet stretch over their bones. (Kind of gives the Christmas song lyrics “Up on the housetop, click, click, click” new meaning, doesn’t it?)

The Downses have a veterinarian who was willing to learn about reindeer, and they also work with The Ohio State University and the Columbus Zoo. Reindeer must be fed and watered every morning, checked for health issues and interacted with so they aren’t skittish of their owners. During the summer, the deer must be near fans and their antlers must be sprayed to protect from fly bites. The Pine Acres deer eat a diet of steamed rolled oats, soybean meal, alfalfa leaves and other goodies.

“I learned to give shots and antibiotics, and I have a veterinary first-aid kit on hand,” says Dan.

He’s become attuned to signs that the animals don’t feel well, and he knows how to take their temperature. The couple takes few vacation days, because they need to be at the farm to care for the reindeer. But Dan says the biggest challenge he and his wife face when raising the animals is when it comes to breeding.

“We had a problem with the babies at first. We had no luck, and it was heartbreaking,” says Dan. “This is the first year we had three born and three live. We’re happy about that.

“This is not a petting zoo. People don’t understand how expensive and time consuming it is to own and take care of the reindeer. But there’s nothing crazy about owning them.”

It’s hard to know exactly how many reindeer live in Ohio on farms like Pine Acres. Unlike captive white-tailed deer, the Ohio Department of Agriculture does not require owners of reindeer to have a license, which makes it difficult to get an accurate count. A license is required for those who want to show the animals as the Downses do.

“Linda and Dan will spend a small fortune in getting a reindeer healthy,” says Daryl Simon, the full-time reindeer breeder who sold the Downses their first deer and an executive board member of the national Reindeer Owners and Breeders Association. “They do everything right.”

The Pines Acres reindeer can be seen at special events at the farm during the holiday season and are taken to about 15 regional events a year, appearing at VFW Breakfasts with Santa and other public and private events.

“The reindeer aren’t pets, but they’re almost like our family,” Linda says. “People of all ages like to come here and see them. Most people have never seen a real reindeer. It’s a privilege to care for them and share them with others.”

When snows falls softly and the reindeer in their heavy winter coats and green halters play in the pine forest, the couple says the scene is magical.

“You can just spend hours staring at how beautiful it all is,” says Linda. 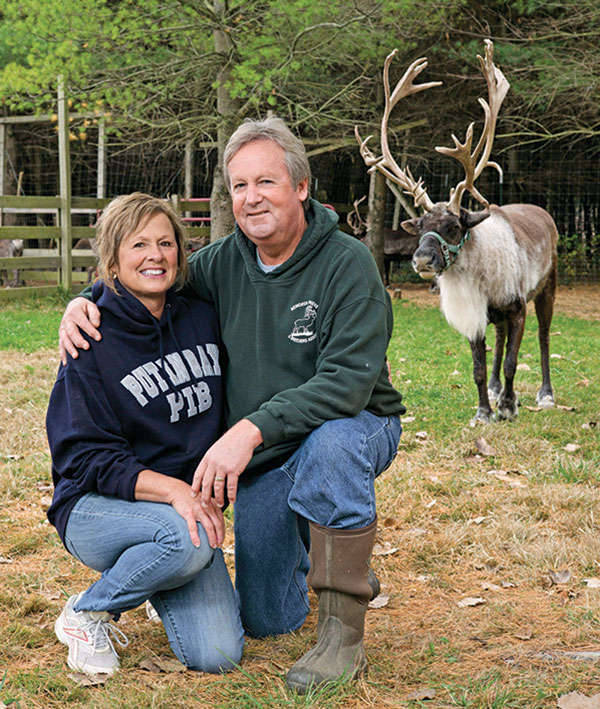 Dan and Linda Downs says the reindeer aren't pets, but they've almost become like family to the couple. (photo by Joshua A. Bickel)

Dan recently got a call from a man whose elderly father had a reindeer herd. But the son wasn’t as enthusiastic about the animals or the farm and wisely decided it was time to sell. He called Dan to see if he knew anyone who could take the reindeer.

“I kept thinking, That will be us someday. Hopefully not for many years, but someday we won’t be able to take care of our reindeer. We would want them to go to a good home where they would be taken care of,” Dan says.

He and Linda agree to purchase the three reindeer. With the couple’s existing herd of nine reindeer, that will soon bring the total at the farm to 12 — three more than Santa Claus has if you’re tallying those mentioned in the classic Christmas song “Rudolph the Red-Nosed Reindeer.”

“I told you we were passionate about reindeer, didn’t I?”