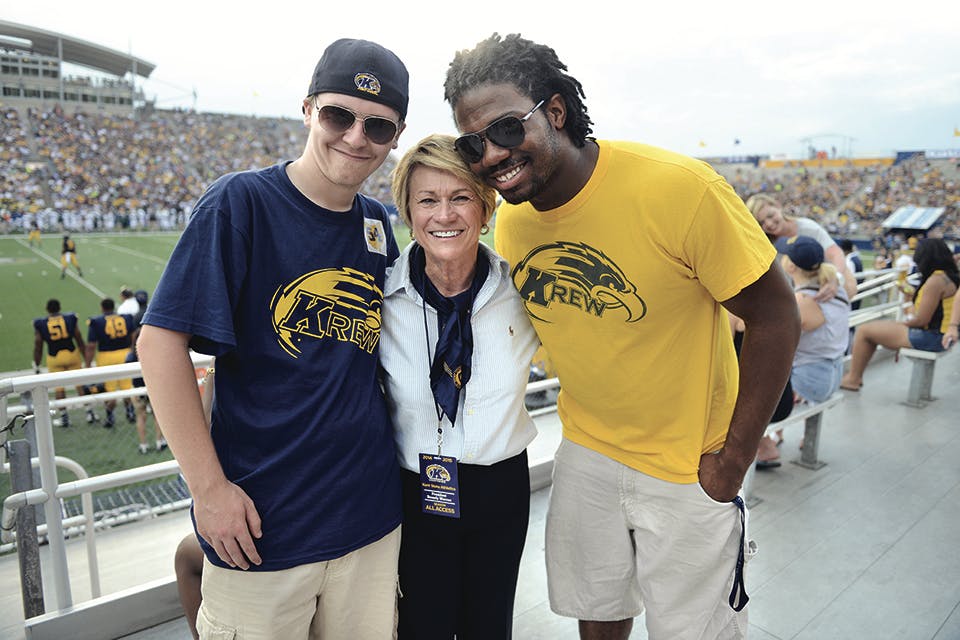 Beverly Warren, Jim Tressel and Scott Scarborough each took the helm of one of Ohio’s state universities this fall.

Serving as the new president of the largest university in northeast Ohio has resulted in a busy schedule for Beverly Warren. She has already visited all of Kent’s eight satellite campuses and has plans to meet with KSU alumni throughout the country.

“Kent State is the lifeblood of many communities, where we’re actually taking education to the people,” explains the 66-year-old Warren, who was most recently the provost at Virginia Commonwealth University.

Warren, who holds doctorate degrees from both Alabama and Auburn, says she believes the university experience should do no less than dramatically reshape the lives of students who have invested their time and resources.

“My philosophy is that higher education should provide opportunities for personal and professional growth,” she says. “Students who experience an education at Kent State should be transformed by that experience.”

Warren describes her leadership style as a collaborative approach that engages all stakeholders to find viable answers. One of her current priorities is finding solutions to the challenges of providing affordable and accessible education for students located throughout Ohio.
“With declining resources from the state, the cost of education is increasing dramatically,” she says. “How do we all work together to address college affordability and quality?”

One of the biggest changes at Kent State University and other universities throughout the state are what Warren terms “blended-learning opportunities,” which integrate seemingly opposite educational approaches, such as pairing face-to-face learning with online instruction, into a cohesive experience that ends up improving student performance.

“Higher education is changing dramatically in terms of how we deliver instruction and how we address different learning styles as a complement to face-to-face instruction,” Warren explains.

While the modern student is armed with more information than ever, Warren says the challenge is figuring out how to put that wealth of information to the best use. “Students are now coming to us with much more refined multitasking abilities,” she says. “We’re bombarded by information coming from many sources. The question is, how do we utilize those sources effectively?”

Preparing students for the job market in their field of choice is always an end goal, but Warren says businesses have become increasingly interested in hiring well-rounded employees.
“Employers often tell me it’s not solely the degree,” she says. “It’s who the person is as much as what the person does.” 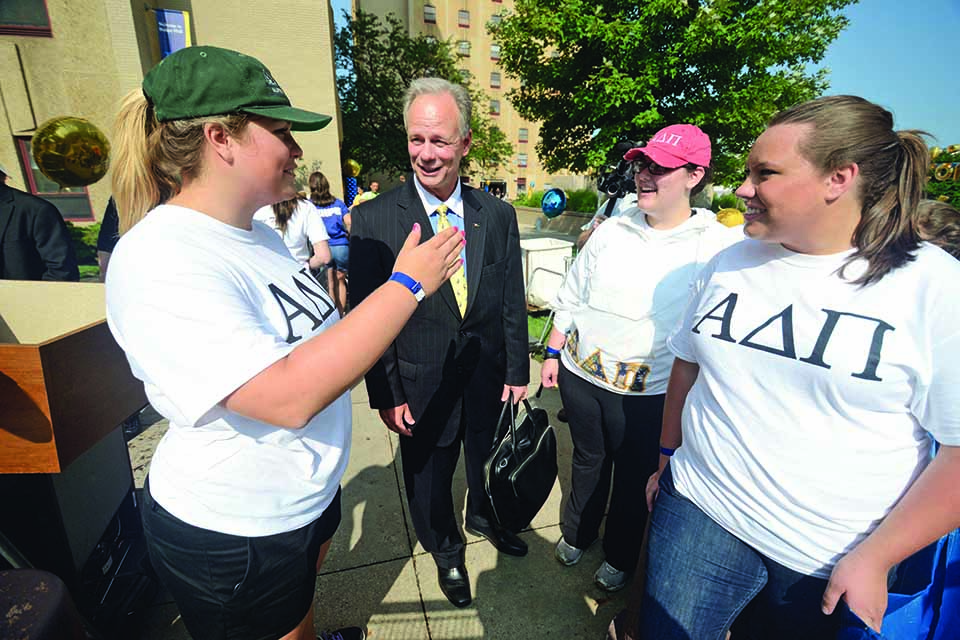 Hailing from the sports-crazy state of Texas, Scott Scarborough’s leadership approach is infused with the wisdom that all successful teams use as a means to reach their goals.

“I try to surround myself with very talented people and support them,” explains the 51-year-old Scarborough, who was most recently the provost at the University of Toledo. “Getting a sense of what people’s strengths and weaknesses are enables you to put them in positions that maximize those strengths.”

With a Ph.D. in strategic management from the University of Texas, Scarborough is uniquely suited to apply his skills to the ever-increasing financial obstacles facing Ohio’s state schools.

“The biggest challenges for public universities have always been financial resources,” he says. “Federal funding is decreasing and there is increased competition for higher-education alternatives such as online providers. You just have to make smart choices and make a strong case for public investment in state universities.

“Large state universities are multimillion-dollar, complex entities,” he adds. “You have to be very comfortable with understanding financial reports.”

Despite all the changes on the higher-education landscape, Scarborough says he still believes in the traditional principles that have served educational institutions well over the years.

“Every university focuses on teaching, research and service and any successful university does all three of those things well,” he says. “The common denominator to all of those things is having a great faculty, and my job as an administrator is to put those pieces together.”

Despite dwindling financial reserves, Scarborough sees many possibilities for the future. “Technologies are creating new opportunities,” he says. “When I went to school you sat and listened to a lecture, took notes, took an exam and moved on. Now educational resources are being downloaded.”

Scarborough says working hand in hand with the Greater Akron community will be a priority. “You’re always primarily tied to the fortunes of the community in which you reside,” he says. “Especially during tough economic times.” 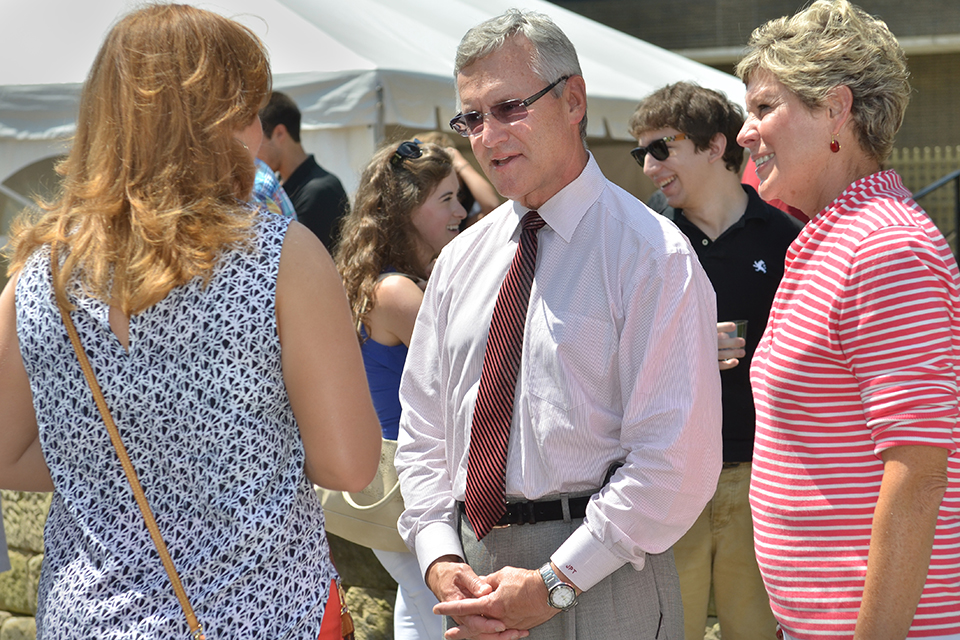 Returning to the school where he coached the Penguins football team to four Division I-AA national titles in 15 years has been a comfortable transition for Jim Tressel.

“When I returned here I drove past all the buildings and streets and had nothing but great memories,” recalls the 61-year-old. “This is an area where it truly is understood how important we [as a university] are.”

The man once called “The Senator” became an iconic figure in the annals of Ohio State University football during his time there, leading the Buckeyes to the 2002 national championship, not to mention seven consecutive victories over the team’s arch-rival, Michigan.
Tressel says he believes the approach that produced those accomplishments can carry over to university administration.

“It’s about being accountable and responsible,” he says. “Every time our teams understood something was bigger than them, we did great things. I don’t think the world has a shortage of ideas, it has a shortage of execution.”
Tressel also understands that financial challenges are priority number one for any administrator.

“The first thing we’re all doing is trying to get a handle on those tough budget decisions,” he says. “It’s one of the most important things to focus on. We’ve all tried hard to build up our campuses. At Youngstown State we have a great advantage in that our region totally believes in us as an asset.”

Tressel and his wife, Ellen, hosted a reception for approximately 900 faculty, students, university employees and alumni on his first day in office. And while Tressel’s reputation precedes him, he knows the importance of the task at hand. “Those of us in urban settings have a responsibility to impact our regions. What can we do to make our population area better?”

Tressel understands the financial realities facing public universities, but he says he chooses to focus on what resources are available rather than those that are not.

“We need to understand that the strain on the public dollar is real,” Tressel explains. “We can’t live without state subsidies, but I don’t think we should spend a lot of time on what we don’t have until we’ve maxed out what we do have. We all wish the pie were bigger. If we all get better at what we do, the pie will get bigger.”