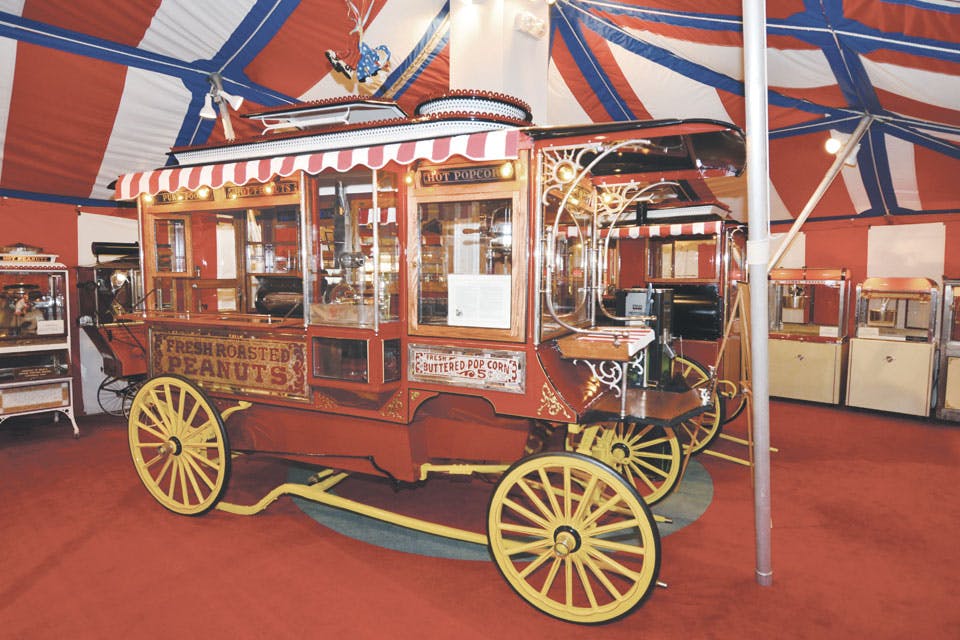 This spot celebrates the city of Marion’s role in snack history.

Warren Hoover Brown founded his Wyandot Inc. popcorn company in 1936 to support his family during the Great Depression. Decades later, after a long career in the family business, George Brown — Warren Hoover Brown’s son — founded the Wyandot Popcorn Museum in 1982 as a way to celebrate the city of Marion’s role in American snack history.

“George was very, very interested in the antique machines that were the basis for the popcorn explosion in America,” says Gale Martin, director of the Marion County Historical Society.

Today, under a big-top tent, in what was once the mail-sorting room of the former Marion post office, more than 50 antique popcorn carts and machines are displayed alongside photos and popcorn paraphernalia dating back to the 19th century.

Visitors can take a closer look at the brightly colored popcorn wagons, including a steam-powered popcorn machine that dates back to 1899 and is one of the three oldest of its kind in the United States. There’s also a horse-drawn popcorn wagon on display that was once owned by actor Paul Newman.

“Paul Newman and George got together when Paul decided to start a popcorn line,” explains Martin. “Newman was from Ohio, so it just seemed to make sense that he was going to go with an Ohio person to produce his popcorn.”

Newman’s wagon joined the museum following a promotional tour in Connecticut and New York City’s Central Park. “It’s a 1909 Dunbar model 950,” says Martin. “It’s one of only two that I know of that still exist from that model and that year.”

Those interested in science will appreciate the exhibits dedicated to Wyandot’s role in creating popcorn varieties that were better at holding a caramel coating or soaking up melted butter, and the young at heart will get a thrill from the collection of historic toys from Cracker Jack boxes (Wyandot produced the ballpark staple for a decade).

But the showstoppers are the antique popcorn wagons that initially won George Brown’s heart.

“You got all the shiny chrome, the beautifully painted wagons, the mirrored glass,” says Martin. “It’s eye-popping.”

The Wyandot Popcorn Museum is part of the Marion County Historical Society, which is located at 169 E. Church St., Marion 43302. Visit wyandotpopcornmus.com or call 740/387-4255 for museum hours and admission information.