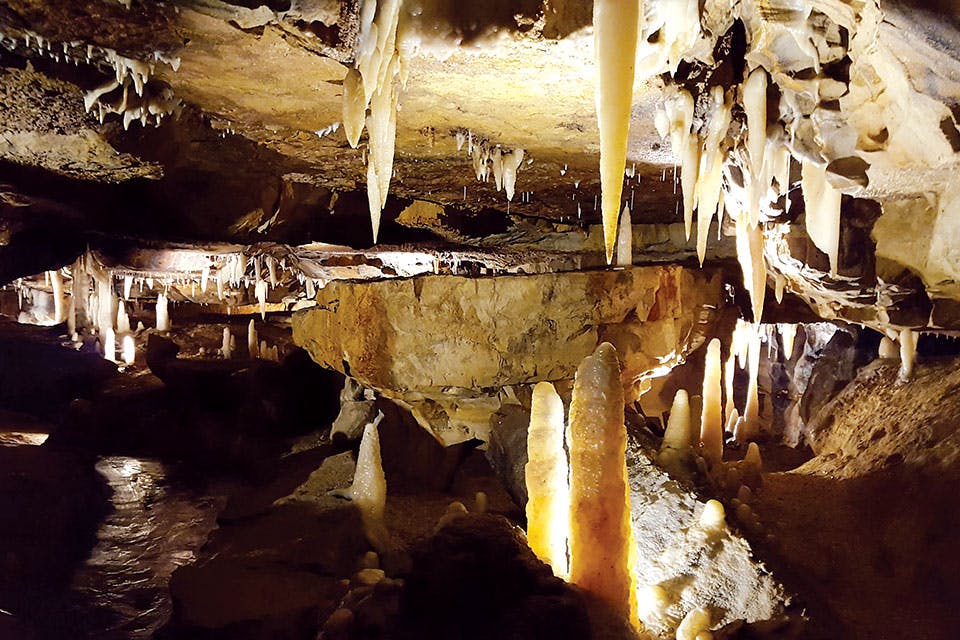 A farmhand stumbled upon a sinkhole in a field on Abraham William Reams’ property in 1897. The tours of the caves the hole led to started soon after.

Farmers are a hardy bunch. Their jobs require dealing with heat and frost, drought and flood, disease and pests. And, in the case of Abraham William Reams, sinkholes. A farmhand stumbled upon one in a field on Reams’ West Liberty property in 1897, and after learning the hole led to underground passageways, Reams developed a tourist attraction. In fact, less than two weeks elapsed between the discovery of the sinkhole and the first lantern-led tour through what is today known as Ohio Caverns.

“There are a total of 3.5 miles of surveyed passageways here, but those early visitors only visited about a quarter-mile of the passageways,” explains Eric Evans, Ohio Caverns’ general manager.

Limited at first by lack of stairs, low lighting and tunnels choked with mud and debris, researchers and laypeople alike got to delve deeper in the 1920s, when a subsequent landowner cleared blocked passageways and installed battery-operated lights. Today, the cave looks much as it did a century ago.

“A lot of the caves [initially opened to tourists] were defaced, formations were broken, they were not preserved,” Evans explains, “So, we do give a lot of credit to the early ownership in the preservation of the cave here. It is really the reason why we’re here: We’re stewards of the property. We’re here to protect the cave so future generations can see it as it was first seen.”

Inside, visitors find cream-white stalactites and stalagmites, and the presence of various minerals has altered the cavern walls to a showy effect. The attraction was billed as far back as the 1920s as America’s most colorful caverns.

“There’s iron oxide deposits, which give you red, orange and yellow colors in the cave,” says Evans. “There’s some blues and some black colors which come from a mineral called manganese.”

During warm-weather months, that palette and the cave formations are the highlight of the Natural Wonders tour — offered along with a separate Historic Tour, the latter of which enters the caverns through the same sinkhole that first led explorers inside. (The caverns are open year-round, with one tour available in the winter.) No matter your choice, Evans says visitors emerge in awe.

“They are amazed when they come out,” he says. “We’re very blessed here. We have a really decorated cave with a lot of preserved stalactites and stalagmites ... and we get visitors from all over the world. It’s just really fun to see their reactions.”