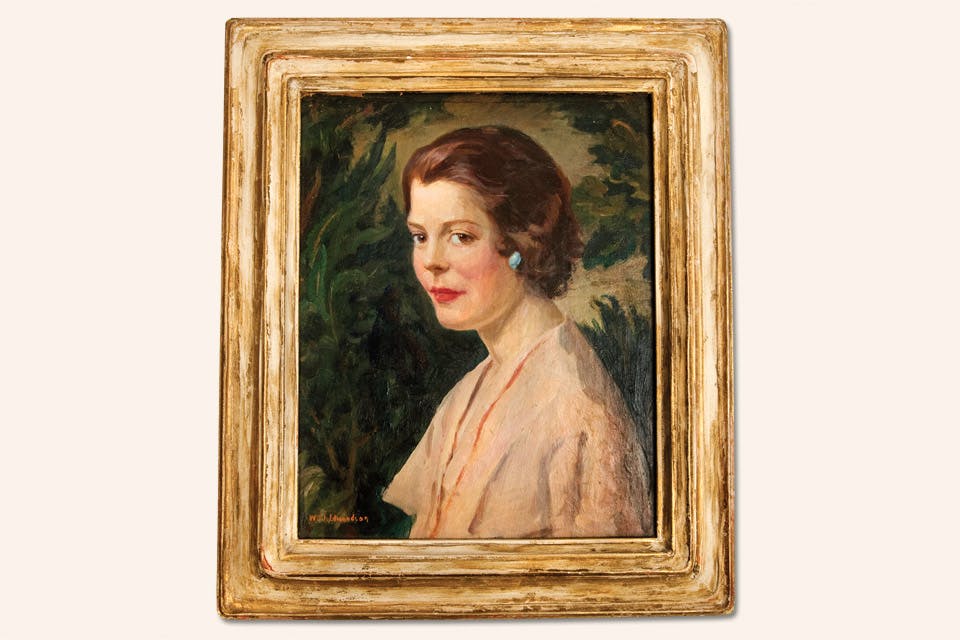 A mysterious painting stirs the imagination and shows the power of the unknown.

The oil painting has lived with me since my mother sensed years ago that a nursing home or the inevitable was closer than any of us wanted to admit.

The portrait depicts a woman, perhaps in her early 30s. She wears a soft pink dress and a blue robin’s egg earring. My mother wanted the portrait to be safe and not sold at a garage sale.

“Take care of this,” she said to me in one of her last truly lucid conversations. The painting was always part of my childhood, although for the most part I ignored it. It hung in a prominent place in our home. I knew it was a gift to my mother, and I knew she cherished it above all else. My father was not so enamored and frowned when anyone mentioned it.

The portrait is by painter William John Edmondson, who was born in Norwalk in 1868 and died in 1966. The painter was part of the very talented Edmondson family, comprised of artists, photographers and printmakers who made a name for themselves in northeast Ohio from the late 1800s through the 1900s.

I don’t know how my parents became connected with the Edmondsons. But my father studied photography under their tutelage and my mother was William’s occasional student. She was a promising oil painter until the death of my older sister. Afterwards, she rarely picked up her pig-bristle brushes.

In recognition of the role the creative family played in my parents’ lives, they named the Cleveland portrait studio they owned with a partner Edmondson Studios.

When the painting hung in my mother’s house, I remember many visitors thinking the portrait was of her. I have never seen a photograph of my mother younger than 60. I have nothing for comparison. My mother was one of those women who never allowed anyone to take her picture, always shooing away a would-be family photographer, even my father. School photos were long lost.

No, my mother insisted, she was not the woman in the painting. “But it looks so much like you,” people would say. The nose, the short, naturally wavy brown hair that framed the face, the brown eyes.

The Edmondsons were well known for painting and photographing Cleveland’s early blue-blood families — Mather, Rockefeller, Hanna, Otis, Brown, Brush. I always just assumed the unknown woman in the painting was a prominent socialite. I still believe that.

But every so often I think of the once mysterious Helga in Andrew Wyeth’s paintings. Or I compare the earring in my painting to the more famous one in Johannes Vermeer’s Girl with a Pearl Earring. Like the subjects in the famous paintings, my elusive lady makes me wonder.

Did my mother ever pose for Edmondson? Could he have painted the portrait without the subject sitting for him? Or did he give my mother the painting, which was perhaps rejected by a demanding socialite, because the likeness was so striking?

I also think of the novel The Bridges of Madison County, its character, Iowa housewife Francesca Johnson, and the letters describing her love affair found by her children after her death.

Today, the portrait is tilted against a wall and on top of a cabinet where it has been for many years. Yes, I should have it cleaned and move it out of the sunlight. And yes, I should get it into deserving hands before my children sell it at a garage sale.

But somehow I can’t bring myself to act. The portrait is both comforting and unsettling to me. Maybe I don’t really want a definitive answer.

So I will continue to occasionally lightly dust the painting and examine the brush strokes of a man I probably met but don’t remember. One day, I will tape this essay in a sealed envelope to the back of my mother’s painting for others to read. May their imaginations dance as well.

Jill Sell, an Ohio Magazine contributing editor, is based in Sagamore Hills.