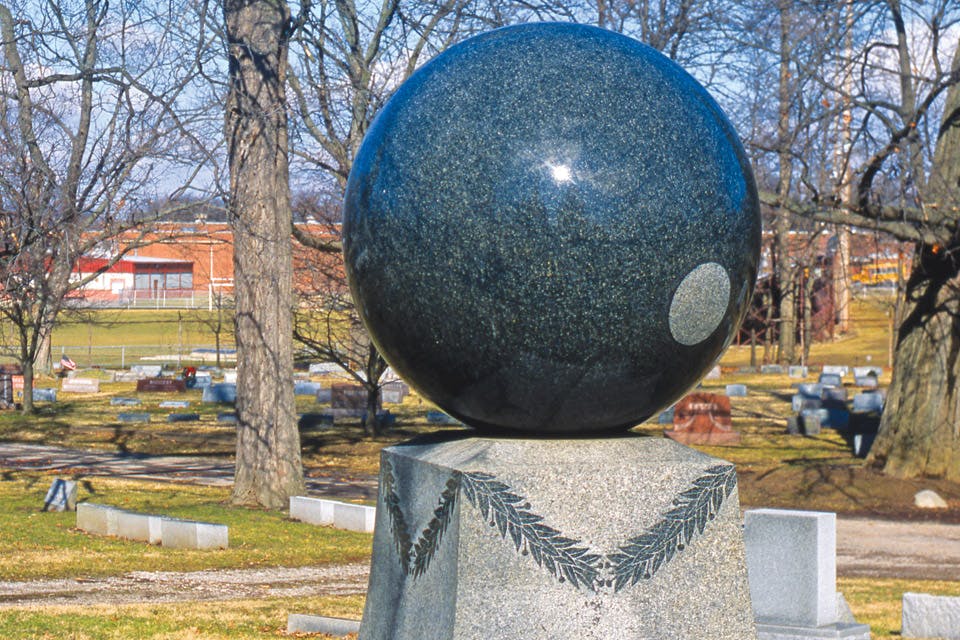 The unpolished spot on the sphere atop the grave marker has moved quite a bit since 1896 and no one really knows why.

Within its 150 acres, the Marion Cemetery holds 160 years of history, including a soldiers and sailors monument and one of our nation’s largest World War II memorials outside of Washington, D.C. The tomb of 29th U.S. President Warren G. Harding is nearby.

But there’s one monument in particular that draws attention from visitors in search of the supernatural: what’s known as the Merchant Ball — a large granite orb that rests atop a 5-foot-tall, three-tiered base.

“It was put up in 1896, by the C.B. Merchant family,” explains Jim Riedl, Marion Cemetery superintendent. “It’s Quincy black granite, which is not quarried anymore.”

The spherical stone is polished to a shine in every place except for the circle where it originally rested atop its pedestal. No one would be the wiser except, somehow, the 5,200-pound ball keeps moving. It seems impossible, but since the turn of the 20th century, plenty of evidence speaks to the contrary.

“We have old pictures where [the unpolished spot] is way up on the top,” says Riedl. “I think that it moves about a quarter of an inch a year, but there was a notation on a picture [from the early 1900s] that it had moved 5 inches in the previous seven months, so it was cruising along.”

In the 40 years that Riedl has worked at the cemetery, he says the unpolished spot has moved just four or five inches, but it’s enough to attract curious visitors.

“It draws all sorts of people,” he says. “They’ve done all sorts of seismic and gravitational research on it, trying to figure out why it does this.”

Some speculate a purely scientific reason. Riedl himself surmises that the movement may be caused by water freezing and thawing in the space where the Merchant Ball touches the monument’s base. Others think it’s a long-standing joke perpetuated by members of the grounds crew.

“Being in a cemetery, you have all of the ghost theories,” says Riedl. “We’ve even had visits from the paranormal [investigators] who came in and put up all sorts of microphones to pick up sounds in the cemetery and try to distinguish whether they’re supernatural or not.”