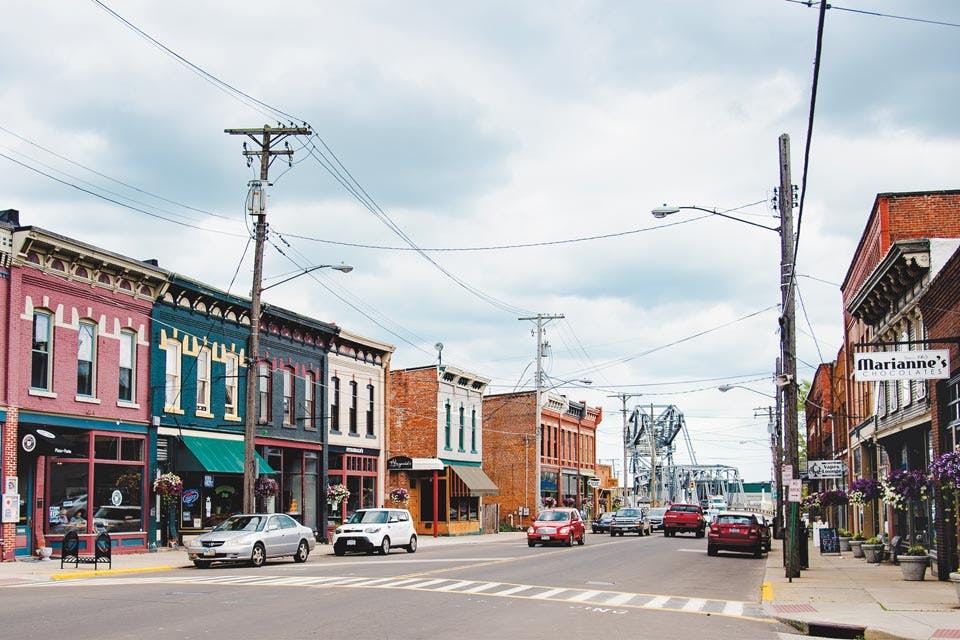 Ashtabula’s historic Bridge Street won the title of America’s Main Street in June.
Here’s how it beat out 300 others to claim the $25,000 prize.

Every half hour, the Bascule Lift Bridge slowly rises, allowing large freighters, tiny fishing boats and everything in between to pass underneath and continue down the Ashtabula River. Built in 1925, the gray bridge juts above the nearby trees and buildings. It even inspired the name of the roadway that runs along the harbor: Bridge Street.

During the late 19th century, Ashtabula Harbor was a major shipping port as well as a center of shipbuilding, and that long history is still seen today.

Carlisle’s Home in the Harbor is another local business tied to Ashtabula’s past. The specialty store sells wine, art, soaps and home decor, but its name was inspired by Ashtabula’s Carlisle’s department store that opened in 1857.

In June, Bridge Street was named America’s Main Street from among 300 entries across the United States. Independent We Stand — an initiative to celebrate buying local sponsored by outdoor-power-equipment company Stihl — launched the contest in 2015 and awards a $25,000 prize to each year’s winner. Nominations open each February, and online votes determine who takes top prize.

“When I saw this contest, it made me think it was an opportunity to rally some excitement for the area,” says Melinda McNutt, an Ashtabula native and a board member of the Lift Bridge Community Association, which aims to improve Bridge Street and increase tourism. “I’ve always wanted to share it with others.”

McNutt entered Bridge Street in the competition’s 2017 installment, and although it was a Top 5 finalist, the honor went to a community in Florida. For 2018, Bridge Street stakeholders organized a social-media push to help generate the votes that put them over the top. Once Bridge Street reached the Top 25, Melody Shiflet, owner of Heartmade Boutique and a Lift Bridge Community Association board member, created a new meme each day to encourage voting.

“We tried to think of any crazy scheme we could to get people to vote every single day,” she says.

As of early July, the Lift Bridge Community Association planned to use the $25,000 prize on several small projects, including way-finding and selfie signs, life-size games and a Gator utility vehicle.

“The win is well deserved for the amount of love and support this street receives from the rest of the community,” says McNutt, who has contacted other towns about vying for the honor. “I’d personally just like to see that more main streets in Ohio compete. We have some really great ones.”